“Go for it and work hard” – entrepreneurship roundtable with LSE alumni

“Go for it and work hard” – entrepreneurship roundtable with LSE alumni

In the context of the celebrations marking the German Alumni Association’s 30th Anniversary, LSE Enterprise Germany organised an LSE Alumni Startup Entrepreneur Roundtable on 27 September in Berlin to showcase the talent and diversity of young LSE entrepreneurs, in cooperation with event partner Mila.

Berlin, being one of the hotspots for young entrepreneurs to start their companies, is now increasingly competing with London to become the continent’s leading metropolis for digital start-ups, of which Berlin houses approximately 500. A new startup is founded every 20 minutes in the German capital and the industry is set to produce 100,000 new jobs by 2020, according to a study recently published by McKinsey. So, if you’re looking to get a tech job, Berlin could be your way in.

It’s no secret that Berlin is cheaper than many of its European counterparts. Office overheads and the price of living are lower, which gives those entrepreneurs with less money the chance to be and stay creative: “With low costs and high spirits, Berlin is home to a vibrant atmosphere and diversity which opens up space to give even riskier ideas a go,” stated Christian Thiel, Manager LSE Enterprise Germany, who moderated the event. “The government, too, is supportive of the fertile breeding ground for startups and is keen to promote their growth. With little traditional industry the city depends on tourism and culture. The Berlin senate in particular is thus increasingly recognising the potential that startup founders have for creating jobs as well as for maintaining an innovative and attractive urban environment.”

Berlin might not be the next Silicon Valley, or the only European startup hub that matters, but it is definitely one of the go to places for young entrepreneurs: a place where companies are founded in cafés and bars, not garages; awash with plenty of talent and in the heart of Europe, offering a buzzing urban context for setting up innovative and productive businesses with global impact. As demonstrated by startups such as SoundCloud, GetYourGuide, or Onefootball.

With all these aforementioned features, it is not surprising that numerous LSE alumni entrepreneurs have chosen Berlin as the city to realise their business ideas in. Meet the LSE Alumni who were frank about their experiences within the exciting world of startups and what they have learned since their time at LSE.

Alexander Neumann – Alexander is the founder and CEO of erdbär GmbH, which offers healthy organic snacks for children under the brand name Freche Freunde. With his range of fruit purees, chips and juice mixes, Alex created an authentic product that needed little explanation: the sustainability and health-centred brand was in fact so appealing, that a crowdfunding initiative for growth financing managed to raise €250,000 in ten hours – 18 months after founding the brand with bootstrapping means. A Cologne native, Alex holds a Bachelor’s Degree in Management from LSE and a CEMS Master’s from ESADE in Barcelona. With six years of management-level experience at Nestlé under his belt, covering markets as diverse as Switzerland, US and Mexico, he decided to start a business together with his wife in 2010. The erdbär product line has been evolving ever since, and erdbär products can now be found in about 4000 stores nationwide!

Anna Roth-Bunting – Anna is the co-founder and CEO of Talents4Good, a recruitment agency that seeks to fit top talent with jobs that do good. Anna holds a BA in Politics, Philosophy and Economics from the University of Oxford, and an MSc in Development Studies from LSE. While initially harbouring journalistic ambitions, she decided that she wanted to have a more active stake in finding developmental and social solutions. She gained experiences at the German Agency for International Cooperation (Deutsche Gesellschaft für Internationale Zusammenarbeit, GIZ), GOPA (consulting firm for the development sector), and BearingPoint, where she focused on consulting services for the public sector – eventually crafting her own approach to social entrepreneurship in 2012 with Talents4Good.

Janna Schmidt-Holtz – Janna recently founded Event Inc., a high quality event contact provider and database. The website features boutique event locations, catering services and event management agencies for weddings, parties and business events. After starting out with locations in Hamburg and Berlin in March 2014, the site now also features Munich, Frankfurt, Cologne, Düsseldorf and strives to eventually offer even more locations nation-wide. Janna read Economics and Management at Oxford before moving to London to pursue an MSc in International Relations at LSE. After another two years in the UK working for Bain&Company, she moved back to Hamburg. A passionate serial-entrepreneur, she founded gastronomy and catering company Kaiserwetter in Hamburg, only to establish and head GlossyBox until 2012.

Matt Kuppers – Matt Kuppers is the Founder and CEO ofStartup Manufactory, a London based accelerator that specialises in developing startups, scaling SMEs and building accelerator programmes for corporates. He is also the co-founder of MenuSpring, a London Business School Incubator Programme backed startup that has been featured in the best British Startup 100 ranking in 2013. Prior to that, Matt held a position as associate at Straub Ventures, a Notting Hill based venture capital firm, where he set up an SEO boutique called rankingriser to provide the venture capital’s firm portfolio with SEO.

Moritz Kreppel – Moritz is co-founder and CEO of the Urban Sports Club, a Berlin-based startup offering a flat rate membership to sports clubs across the city and soon across the country. One single, monthly membership gives unlimited access to more than 20 types of sports in currently 70+ sports venues ranging from aerobic to fitness, rock climbing, tennis and badminton to team sports such as football or beach volleyball.Moritz holds a BA in Social and Political Science from the University of Cambridge, and an MSc in International Relations from LSE. After three years at the Boston Consulting Group and experiences at the European Parliament, European Commission, Deutsche Bundesbank, as well as KPMG, he ventured into the Berlin startup world in 2012.

There is no one-fits-all solution

When talking about their experiences it was quickly clear that every startup adventure was unique: the panellists had started their ventures at different times in their lives, and the enterprises were as unique as the people who started them. For all of the panellists, however, their startup was something quite personal – wanting to be independent and go your own way with their company was as much of a motivating factor as was the idea that you had made out a niche or an idea that needed developing. Anna pointed out, that her time at LSE helped her in pursuing what she was passionate about: “You meet so many people from all over the world. Everyone has their own interest and what’s more, most are intensely passionate about a specific topic. I wanted to find that sort of passion for myself, and I wanted my job to be engaging with it. It was only by founding my own business that I could properly pursue my dream of making a difference.”

Most panellists had experienced the world of consultancy and the long work hours that go with it. Starting their own businesses, however, they realised that they were not going to work less. “As a young startup entrepreneur you work non-stop,” said Janna. “You cannot simply leave your day job at the door the minute you get home. You think about it day and night. You learn constantly, because everyday is different and everything is new. It’s a steep learning curve. And because it is your idea and your own project, all this work is hugely satisfying and in the end motivates you more than corporate culture or money ever could.”

Moritz stressed the importance of the team and a business partner you trust: “Who you work with is crucial to your success and happiness within the organization, but especially in startups. Most likely you’ll be spending a lot of time in a small team and the line between work and home becomes blurred. It’s important to create a team of people you trust, admire, and respect. Really, pay attention to who’s on the team.”

But finding a good team is not the only challenge for young entrepreneurs. Finding good mentors is key to success, too. Yes, age is just a number, but in some cases, it matters. A mentor who has faced similar challenges before and can give you hands-on advice is a huge asset, as there are simply no shortcuts to experience and maturity. But there are always things you have to learn the hard way. Matt points out that one of the toughest challenges for young entrepreneurs is learning to say No. “You cannot do everything, and at the end of the day, you have to realise that no one expects you to either. Find advice from people you trust, and make clear cuts when you realise this should not concern me. Learn to manage and build a team. Ultimately you have to come to that point when your business can run without you being present 24/7.”

While Berlin might offer many advantages to entrepreneurs, there are certainly some drawbacks, too. The paperwork and bureaucracy might be efficient, but at the end of the day there is lots of it and most importantly, it is all in German. “One of the things I love about Berlin is that it’s so diverse and international,” Alexander explains. “It’s an inspiring environment and a great city. And while it is easy to survive in Berlin with no German skills at all, the bureaucracy and paperwork are very difficult to handle if you don’t speak a single word of it. It really puts your patience to the test, German-speaking or not.”

Also mentioned was the difference in culture when it comes to the financing part and the culture of entrepreneurship in Germany. German venture capitalists are cautious. Rather than betting on many companies in the hope that one will grow explosively, they invest more selectively and expect a high proportion to break even within 18 months. Germany’s banks — the local savings banks and co-operatives that fund many traditional companies — are hesitant to lend to untested digital entrepreneurs. Bootstrapping means in the beginning are the norm, and in the end, the panellists agreed: putting your own money into your startup might sound risky, but if you work hard and know that failure is not an option, you have all the motivation you need.

The five young entrepreneurs regretted that the stigma surrounding failure was so big in Germany, even though failure should be seen as a positive learning experience. It is unlikely you make the same mistake twice. Eventually, the discussion formed a clear consensus: go for it and work hard. What’s the worst that can happen? You always have an LSE degree to fall back on. 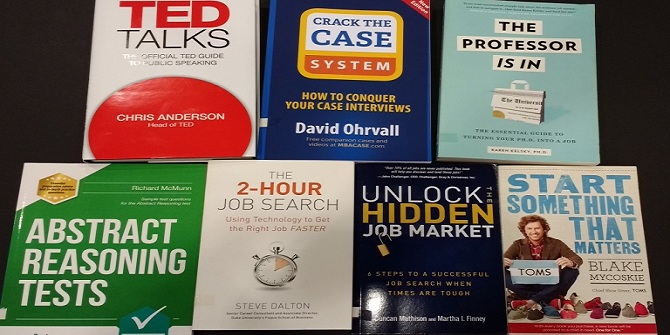 New additions to the library at LSE Careers 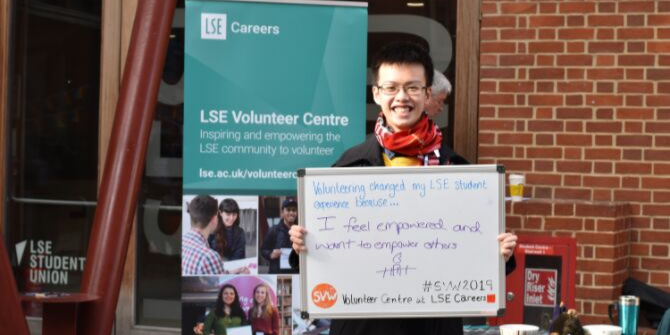 How to make the most of the holidays 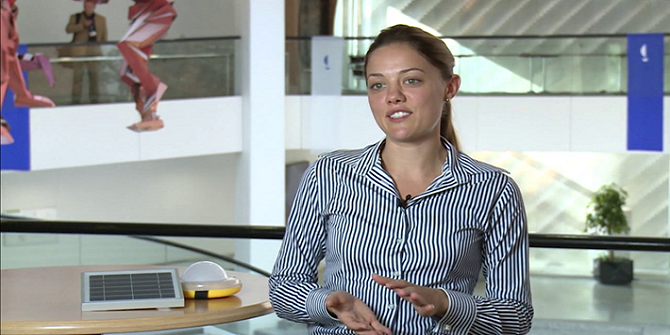