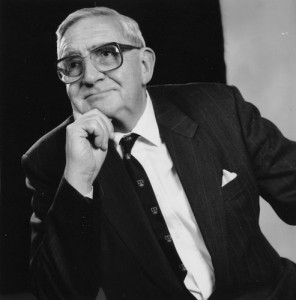 Academic colleagues and past students of both the LSE and King’s College Departments of Geography will be saddened to hear of the death of Professor Michael Wise CBE, MC, on Tuesday 13 October 2015, aged 97.

Michael was appointed as Lecturer in Geography at LSE in 1951 and rapidly rose through the ranks, becoming Ernest Cassel Reader in Economic Geography in 1954 and Professor in 1958. He was a big man with a kind heart and every bit a gentleman.

His air of authority, charm and calming style provided assurance to those around him and led to his appointment as chair of a number of committees in the School. He was Convenor of the LSE Geography Department several times during his 25 years as a professor; indeed most junior colleagues came to the view that he ran the Department irrespective as to who was Convenor! Within the School he is probably best remembered for two things: being the (single) Pro-Director responsible for the change-over of Directorship from Ralph Dahrendorf to I.G. Patel (1983–4) and for his excellent portrayal of Father Christmas at several of the School’s Christmas parties.

As an academic he became extremely influential at national and international levels and is one of only two UK academics who ever achieved the distinction of being President of all three UK geographical societies (The Royal Geographical Society, The Geographical Association and The Institute of British Geographers) and The International Geographical Union (the other was Sir L. Dudley Stamp who was also a member of the LSE Geography Department).

However, he did not restrict himself to purely academic activities, as is illustrated by the fact that he was Chairman of the Ministry of Agriculture Committee of Inquiry into Statutory Smallholdings (1963–67) and served for nineteen years on the Department of Transport Advisory Committee on the Landscape Treatment of Trunk Roads (and later Motorways), nine of which he was Chairman.

Despite the pressures of this very active career he always had time to talk to colleagues and students and to give lectures on the “British Isles” to second year undergraduates. He was made an Honorary Fellow of LSE in 1988 in recognition of his services to the School.

This entry was posted in Department of Geography & Environment and tagged Michael Wise. Bookmark the permalink.