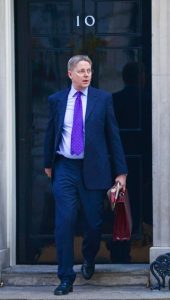 Jeremy Heywood, who passed away on 4 November 2018, was the outstanding civil servant of his generation and the indispensable advisor to four prime ministers.  He was also a friend of 33 years since we met as students at LSE while doing an MSc in economics.  We formed a study group with other friends and would meet regularly in the then smoke-filled Wrights Bar or occasionally in the Shaw library to exchange notes and solve problem sets together. Jeremy was clearly the most clever among us, but he was also mischievous and fun – it didn’t take much to extract him from the library where he was annotating obscure economics articles in his tiny, orderly handwriting to go out for a glass of Pinot Grigio (his favourite).

Jeremy had been sent to LSE on a scholarship from the civil service. That bit of public investment paid off handsomely in a 35 year career culminating in becoming Cabinet Secretary in 2012. He was at the centre of every major policy challenge facing the UK — Black Wednesday, the G20 summit in Gleneagles with its focus on making poverty history, the 2008 financial crisis and most recently, Brexit. I was a Permanent Secretary during the 2010 election when the UK had the first coalition government in decades and Jeremy coordinated efforts across Whitehall to make sure that government departments had prepared for all eventualities so that the will of the people could be done.

No 10 was his domain. Prime Ministers came and went but Jeremy was always there asking penetrating questions that made policy better, working tirelessly, keeping the machinery of government ticking over, juggling crises, nurturing his beloved civil service. He hated the limelight which inevitably came with being the most senior public servant in the land. He always emphasized the “servant” over the “public” aspect of the role. It was never about him but always about us. He was the best of us but he used his considerable talents to make us the best of ourselves.

Jeremy was fiercely loyal to his friends. Some might say it was because he did not like change but I think it was because we kept him grounded while high politics swirled around him. He knew we loved him for who he was. He tried to answer all emails within an hour – whether you were the Prime Minister or his friend organizing an outing to the theatre. He was deeply egalitarian in his soul – from royalty to the most junior official – everyone was treated the same. His funeral was a roll call of “the great and the good” but what was most striking was the number of junior civil servants who told stories of Jeremy supporting them and how his soft-spoken probing encouraged them to make their ideas better.

In his professional life, Jeremy embodied the values of the civil service – honesty, integrity, impartiality and objectivity. He worked with hundreds of politicians, some of whom he liked and respected, others he may have not. But he served them all equally well.  What made him special was his ability to give candid advice (and thereby stopping many bad ideas) and yet finding creative ways to achieve politicians’ objectives in the best way possible. There is something very selfless (and dare I say noble) in such an approach and it is why Jeremy defended the civil service when it came under attack to remind us it is an institution that is the envy of the world.

Jeremy understood the importance of investing in the next generation and, in addition to the many he mentored personally, he developed a programme for training talented UK civil servants which was competitively awarded to  LSE. Each year a cohort of (hopefully) 30 new Jeremys goes through the Executive Masters in Public Policy brimming with new ideas and a commitment to the public good.

His foibles were endearing. His academic brilliance was offset by complete incompetence in all things practical. Jeremy never could drive properly, or cook, or fix anything. He hated exercise and for months sported a flimsy bit of gauze wrapped around his wrist so he could avoid having to do press ups on Clapham Common. He had more Blackberry phones (simultaneously) and held onto them for longer than anyone.

And he adored his family. He and Suzanne supported each other unconditionally and that was never more apparent than over the last year. Those of us who watched Suzanne’s Herculean efforts all thought that if you are ever in trouble, you want her on your side.

Conversations during our dinners out were dominated by the children – their evolving political views and interests, musical accomplishments, and latest holidays. He was so proud of them and loved watching them grow up and discover the world. He also loved a good party, supported by his famous playlist, and was often the last one on the dance floor.

Jeremy was like the sun for so many of us – we all orbited around him. This was certainly the case for his friends, for his colleagues in Whitehall and for his family. That is why the world feels a bit colder and darker without him. His new title – Lord Heywood of Whitehall – and his burial in Westminster Abbey and the creation of a foundation in his name to support innovation in the civil service are fitting tributes to his enormous contribution to public life. He was a true servant of the people and a loyal and loving friend to those of us who had the privilege of knowing him.

It is with great sadness that we learnt of Lord Heywood’s death.

Lord Heywood was a great civil servant and a good friend to LSE. The many obituaries written since his death have returned again and again to a number of attributes: his talent, his political impartiality, his sense of public service and the fact he was a grounded human being, unaffected by the importance of his position as Cabinet Secretary (from 2012) and (from 2014) Head of the Home Civil Service. He was made a member of the House of Lords when he stepped down from the civil service in late October.

He had, over many years, a number of roles close to the heart of government. Tony Blair, Gordon Brown, David Cameron and Theresa May each spoke with genuine warmth and admiration about their working relationship with him. He worked with the Cabinet on challenging national issues such as the Iraq war, the 2008 banking crisis, the 2010 coalition negotiations, the 2014 Scottish independence referendum, the 2016 Brexit referendum and on subsequent negotiations.

He had also been principal private secretary to Chancellor Norman Lamont at the time of Black Wednesday back in 1992. Few senior officials will have witnessed the impact of so many major events as they buffeted the machinery of government. Although occasionally criticised for being too willing to shield the Establishment, his actions were always based on a desire to follow due process and deliver the right outcome.

He had been an enthusiast about improving the capability of civil servants and was a proponent of what became, following a competitive process, the ‘Civil Service and LSE Executive Master of Public Policy’ run by the School of Public Policy. He and the head of civil service policy profession, Sir Chris Wormald, have remained actively involved in the EMPP’s progress.

As recently as 24 May this year, Jeremy joined LSE Director Minouche Shafik, Philip Barton, Catriona Laing and Keith Wade for an LSE Alumni event to reminisce about their time as graduate students at the School during the mid-1980s. As the invitation for the event stated, they came “back on campus [to] reconvene their 1980s LSE study group to reflect on the enduring value of an LSE education.  From its small beginnings over coffee in Wright’s Bar, the group has created a special bond lasting more than 30 years”. Having chaired this event, I can report that the evening was both illuminating and fun, demonstrating the five friends’ great affection for each other. Jeremy, dealing with yet another Brexit crisis, had to rush back to Whitehall immediately after the event.

Latterly, he and his successor Sir Mark Sedwill, have had to defend the civil service from attacks in relation to the UK-EU27 negotiation process. Although in 2012 he said to a select committee that “I like to be invisible”, he and his successor have had to go public in their defence of officials who were caught in the crossfire of the Brexit culture war. As Cabinet Secretary, he issued a statement to the media, arguing that the “very best people” had been deployed to make Brexit a success and that “the civil service is at its very best when under pressure”.

His predecessors, Robert Armstrong, Robin Butler, Richard Wilson, Andrew Turnbull and Gus O’Donnell all remain active in the House of Lords, evidence of the remarkable moderation and continuity of British public life.  There is no doubt that Jeremy Heywood, too, would have contributed wisdom from within the Lords. His family’s loss is greatest, but his untimely death will deny us all of the benefit of his wisdom and respect for public service.

Along with my civil service colleagues and alumni group members, I am deeply saddened by the passing of Lord Jeremy Heywood. Jeremy was an inspirational leader and a great mentor to me. His passion for public service knew no bounds. He always saw the bigger picture, thought radical and supported new ideas to help us prepare for and meet tomorrow’s challenges.

It’s an honour and a privilege to have known and worked with Jeremy closely since I joined the civil service nearly ten years ago. Our first and lasting project was co-founding the LSE Civil Service, Government and Public Alumni Group in 2010.

He is a huge loss to the country, the civil service and of course, most of all, to his family. My thoughts, prayers and condolences are with his family and friends.

We must carry on with the example Jeremy set us all in his leadership, compassion and commitment to public service.

Jeremy will continue to inspire me. And I will endeavour to honour his legacy and make him proud by continuing with renewed energy the projects that we started.