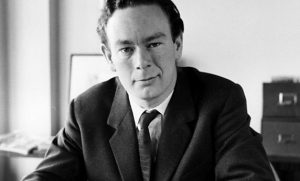 It was with sadness that we learnt of the death of LSE alumnus and emeritus governor Michael Peacock, who died in December 2019.

Michael was well-known in broadcasting, where he had a long career and significant impact, but he also had a longstanding link with the School, graduating in Sociology in 1952 before joining the BBC as a trainee producer.

As editor of Panorama, he was behind the programme’s notorious 1957 April fool’s joke of the Swiss spaghetti harvest. He went on to be editor of BBC Television News, the first head of new channel BBC 2 – responsible for programmes such as Match of the Day, Horizon and the Likely Lads – managing director of London Weekend Television and executive vice-president of Warner Bros Television, in addition to many other roles.

In 1972 he co-founded Video Arts, a company making management training films, which was eventually sold in 1989. This enabled the establishment of a charitable foundation which generously provided scholarships at LSE for students from former Soviet and Eastern European countries.

In 1996 his foundation provided LSE with a record gift which allowed the School to buy what was then the Royalty Theatre. Now known as the Peacock Theatre, it remains a crucial venue for the School, in regular use for lectures, public events, twice-yearly graduation, as well as dance and opera performances through Sadler’s Wells.

A longstanding member of LSE Council -from 1982 to 2009-  Michael was appointed an LSE Fellow in 2004 and subsequently an Emeritus Governor.