Posted on May 7, 2020 by LSE External Communications 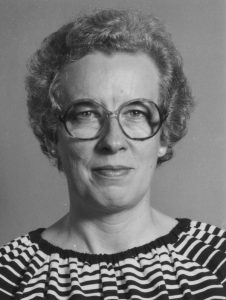 We are saddened to learn of the recent death of longstanding former member of staff, Jennifer Pinney, who worked at the School for 25 years. Colleague and friend Celia Phillips shares her memories of Jennifer.

I first met the formidable Miss Pinney when she arrived at the School. She had come from Paris OECD to head up the administration of the then new, post-Robbins Report Higher Education Research Unit headed by Claus Moser, then Social Statistics Professor there, and Philip Redfern, shortly to become the Head of OPCS. I had just finished my degree and embarked on a doctorate in the educational Statistics area with Claus and officialdom was strange to me. I was terrified of her initially. Jenny however, quickly smoothed my way so I was included in all seminars and given rapid access to any information or contacts I might need. In the days when this was not normal for graduate students she even found me a desk to perch on! She remained supportive, and I owe any proofreading skills I have to her careful tutelage over what seemed endless drafts of my thesis!

Once I joined the Staff, we became friends. And I discovered that her rather formal work demeanour concealed a lively sociable and sympathetic person. I have happy memories of her joining the LSE choir of which she remained a loyal supporter, suppers with musical friends, and many happy nights socialising and playing bridge. Later, she became a family friend and our children remember her exciting visits….

After she left EUSSHE (as it became) she continued her career within the School and others will be more fitted than I to talk of her fundraising under Dahrendorf, her other work with alumni and her whole contribution to the LSE. But over the years, we kept in touch.

In the early 2000’s she persuaded me to follow her ten years on as President of the University of London Lunch Club, one of the LSE-connected things which she continued to support and enjoy until relatively recently. Although her last few years were dogged by illness, I have fairly recent memories of lunches at the club, Easter at Kensington, and numerous musical events….