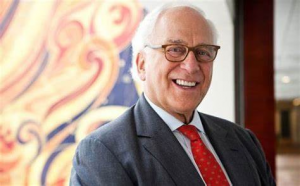 It is with great sadness that we share the passing of Sir Evelyn de Rothschild, who had a long-standing and wide-ranging association with LSE spanning over 50 years.

Sir Evelyn was an Emeritus Governor of LSE, having served as a member of the School’s Court of Governors between 1968 and 2010. He was also an Advisory Board Member for the Grantham Research Institute on Climate Change and the Environment, and a member of the Committee for the £100 million Campaign for LSE, which ran between 1997 and 2007.

As Chairman of the Eranda Rothschild Foundation, which he created in 1967, Sir Evelyn was a committed and generous philanthropist. Since its founding, the Foundation has given more than £73 million to medical research, education and the arts. LSE is extremely grateful to Sir Evelyn for his long-term support through the Foundation, which since 1974, has provided funding for a number of priority areas including scholarships, campus redevelopment and academic-led projects.

In 2002, he set up Elephant Family, a conservation charity, with the Rajmata of Jaipur and Mark Shand, the late brother of the Queen Consort. Two years later, he and his wife, Lady de Rothschild financed an orphanage, the Lady Lynn Joyful Home for Children, in Tamil Nadu, India.

Sir Evelyn dedicated his professional life to his family’s banking empire and served as Chief Executive and Chairman of the bank NM Rothschild and Sons Ltd between 1976 and 2003. Sir Evelyn was also Chairman of E.L. Rothschild Ltd, a private investment company focussed on India.

Widely recognised as one of the leading philanthropists and financiers of his generation, Sir Evelyn was knighted by the Queen in 1989 for services to banking and finance.

Sir Evelyn served the British government in various capacities, including as Chairman of United Racecourse, and Deputy Chairman of Milton Keynes Development Corporation. He was a member of the UK Business Delegation with Prime Minister Tony Blair to South America and represented the UK at the International Institute of Strategic Studies meetings in Bahrain. He was active in many other business sectors including as Chairman of The Economist between 1972 and 1989.