Britons are emerging from the pandemic with fewer divisions than before, says Tim Dixon (More in Common). But while the country is not fiercely divided along cultural or political lines, we need to do a much better job of listening to each other and breaking out of like-minded communities.

Britons are less polarised than the media often portray us to be. It’s easy to look at the United States and assume that because similar forces are at play in Britain we are heading for the same kind of profound polarisation. But More in Common’s research, which spans the US, France and Germany as well as the UK, paints a more positive picture of social solidarity.

Our work on COVID focuses on the forces that are driving societies apart and weakening the links between us. These forces include economic and regional inequality, cultural change, generational tensions, social media, loss of trust, and the under-performance of the main political parties in recent decades. More in Common was set up to counter these forces of division. We bring a lot of social psychology into our work, but we’re not a pure think-tank because our work is focused on solutions.

The pandemic has both united and divided us

Rather like the second world war, the pandemic has turned all our lives upside down. While people’s individual experiences have been very different – some living alone, others working on the frontline exposed to the risk of infection, and others homeschooling – the experience has in many ways been unifying. In years to come we will have stories we can share. At the same time, COVID has disproportionately affected blue-collar workers and people who can’t work from home. While the furlough scheme has ensured that people haven’t been thrown out of work in huge numbers, some groups such as health workers have been far more affected than others, and these divisions may widen as time goes on. However, our research suggests the common dimensions of this experience have been more powerful than the dividing effects. When people are asked whether most people in their country are kind, for example, the UK scores more highly than most other countries.

But it has planted the seeds of division, too

More in Common tracks ‘us versus them’ sentiment across different countries. One of the things that conflict experts tell us to watch out for is narratives of blame and culpability. Some far-right groups online have tried to blame immigrants for spreading COVID, but that narrative is not getting much traction either in the UK, or western societies more generally. Despite the fact that many elements of the UK government’s response have gone wrong, we found little evidence of anti-government feeling either. Most Britons don’t want to be judgmental towards the government: they say, ‘Look, they’ve got some things wrong but I wouldn’t want to be in their shoes.’ In the US, on the other hand, people hold much more polarised views will fall in line with their politics.

Nonetheless, it’s too early to draw any conclusions about the long-term effects of the pandemic. It was some time after the Global Financial Crisis that the Tea Party and authoritarian populism emerged. That’s why we’re trying to pick up the early warning signals of ‘us versus them’ sentiment. Certainly, the period of economic recovery and reconstruction is going to present real challenges.

One reason for optimism is that across many issues – even some controversial ones – a surprising majority of Britons are in agreement. While we do perceive the country to be divided (55 percent think so), this is less than in February 2020, when it was 67 percent. For example, three in five think that ‘people in our country care about each other.’ The pandemic has not accentuated the divisions that emerged from Brexit – in fact it helped bridge those divisions. Some of these gains had, however, been lost by January 2021.

More than other democracies, the UK also has an appetite for change, rather than a return to normality. We identified seven core groups in Britain – with these names: progressive activists, civic pragmatists, disengaged battlers, established liberals, loyal nationals, disengaged traditionalists, and backbone conservatives. Each represents between 12 and 18 percent of the population. They are distinguished by their identity and beliefs, and not their demographic or their political allegiance; but these beliefs predict their views on political issues better than any demographics or even their party identity. Only one of these seven segments doesn’t see the pandemic as an opportunity for change.

Some people – notably working class, low-trust groups, and BAME Britons – have experienced less social solidarity during COVID, but it is not just the middle classes that have a sense of mutual support. In fact the biggest growth in social solidarity has been among the most disengaged, most low-trust groups. All these seven groups have seen an increase in personal agency within their communities. The story is more positive than you might assume. 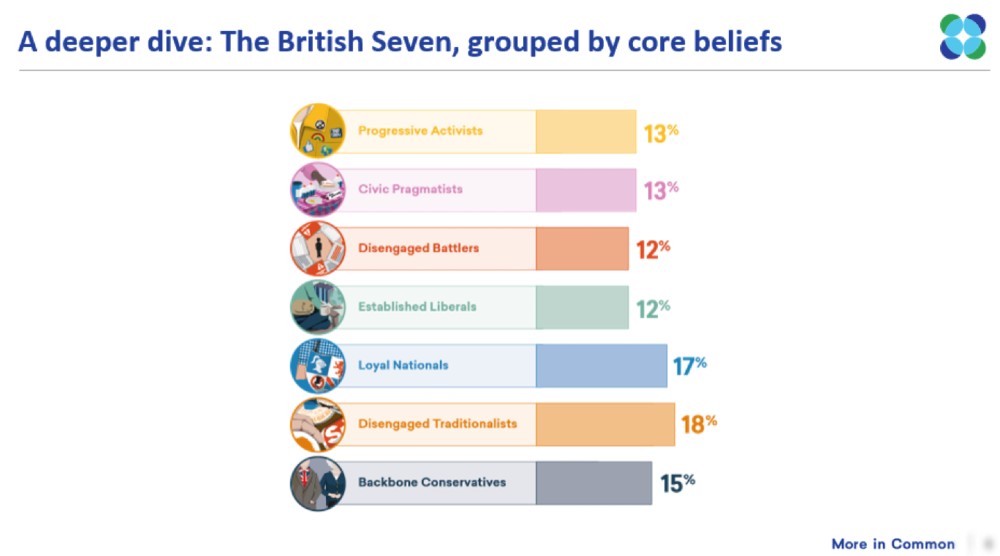 Three in four of us believe inequality is a serious problem, and 80 percent (even three in five Londoners) believe too many decisions are taken in the capital. Only 5 percent (7 percent of Conservatives) think anti-lockdown protesters have been a force for good. Across the political divides, we feel frustrated and exhausted from the divisions of the Brexit years, and proud of the same things – the NHS, the British countryside, local community, becoming a modern and diverse nation, and progress in equality between men and women. The values we most want in our community are hard work, compassion, honesty, tolerance, and environmental friendliness. In short, Britain is not divided between two rigidly opposed groups.

But we need to listen to each other

But while there is surprising common ground, that does not mean that we all see things the same way. We have to be careful about projecting our views onto other parts of the community. For a lot of people, caring about the climate doesn’t necessarily mean veganism, but wanting to preserve our countryside. People feel there’s a problem with inequality, but if you frame that only through the lens of redistribution you lose a lot of support. Research in the US says that people with a postgraduate qualification actually have the worst understanding of the rest of the population because they’re so convinced of the rightness of their cause. We need to check our judgmentalism and understand better the values base that people are coming from. In recent years, our housing and digital environments have separated us into like-minded communities, and the information we receive confirms our biases. We don’t know each other well enough. We don’t have enough diversity of experience across divides. The TV programme Gogglebox is an example of British popular culture that does this well. We need more of it.

What story will we tell ourselves about the pandemic?

Where we end up, and the effect of COVID on social solidarity, will depend on the story that we tell ourselves. Celebrating the ordinary can help us tackle the big issues that we’re confronting. People feel looked down on and patronised by politicians, the media and academics. In his new book Out of the Ordinary, Marc Stears explains how politics had become disconnected from the reality of everyday life between the Great Depression and the second world war. Writers and cultural figures like JB Priestley, George Orwell, Barbara Jones and Dylan Thomas built a new national story that was centred on everyday human dignity. It gave ordinary working people a sense of pride in themselves and their communities. The experience of the Blitz encouraged community solidarity and the creation of the welfare state. As we rebuild in the 2020s, after the greatest collective experience since the second world war, there’s much we can learn and apply from those years in how to build a positive and unifying vision of the future centred on the lives of all of us.

This post represents the views of the author and not those of the COVID-19 blog, nor LSE. It is based on Tim Dixon’s contribution to Social Solidarity and the Virus, a Ralph Miliband Programme event at the LSE on 15 March 2021.

Tim Dixon is co-founder of More in Common and a social entrepreneur who has started businesses and nonprofits in the US, the UK and Australia. From 2004 to 2010 he worked in senior political roles, including as economic adviser and chief speechwriter for two Prime Ministers.

No partisan divide in willingness to wear masks in the UK November 18th, 2020 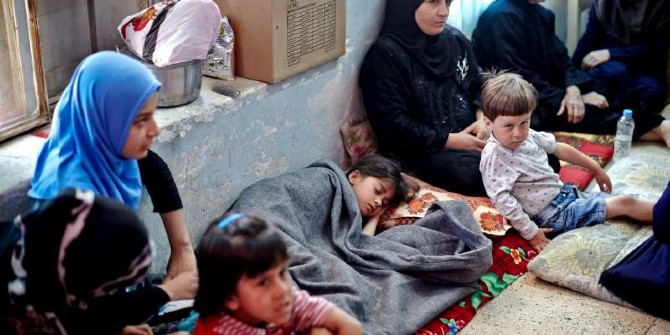 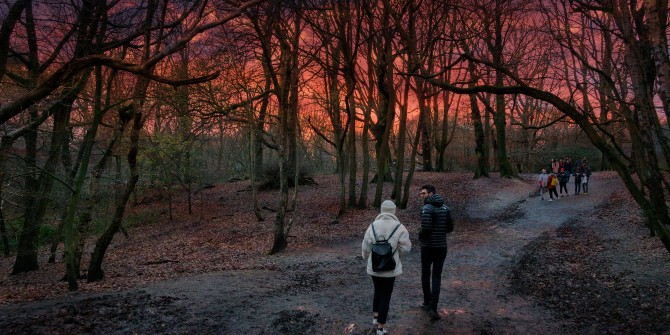