Barbara Richter is uplifted by Hein-Anton van der Heijden’s account of the impact of social movements in changing environmental politics. 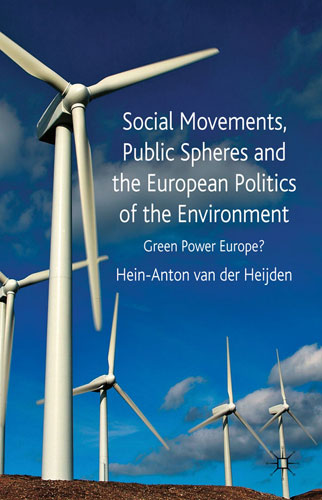 With student protests over the rise in tuition fees all over Europe and huge rallies across Egypt calling forPresident Mubarak to step down both prominent media stories in the last few weeks, Social Movements, Public Spheres and the European Politics of the Environment is a timely publication, looking closely at how effective social movements and social activism can be. Within the context of environmental politics, Hein-Anton van der Heijden, senior lecturer of political science at the University of Amsterdam looks to the EU to consider how social movements contribute to the formation and implementation of policies. In a secondary question, he considers to what extent the EU acts as a role model for others in environmental politics.

The author presents case studies that illustrate how EU environmental policy has been influenced by social movements at all points of the policy process, from the first discussions of policy proposals to monitoring actual implementation. The four case studies are concerned with Natura 2000 (a planned network of conservation areas throughout the EU), genetically modified organisms, the Trans-European Transport Network and the European politics of climate change. In each case study, there is a concise overview of events, the main EU policy decisions, the social movements involved and actual examples of how the EU and social movements interacted to achieve – or prevent – specific outcomes. The case studies are a key strength; they are well structured and provide detailed descriptions of how policy formation works in each case and how social movements and social activism can influence, and sometimes change, outcomes. The specific examples are well chosen and some of them are quite exciting and uplifting. This was an unexpected, yet not unwelcome, experience and can probably be attributed to the author’s experience as a fiction writer. The author seems to have much sympathy for green causes, but he is not a crusader.

The book can be read both as a scientific treatise on social movement theory and its application and as a description of the inner workings of EU environmental policy. To the author’s credit, it is a good book in both

readings. For each chapter, the author states clearly how it relates to his central research question and which conclusions he draws from the results. This proves very helpful in following his main argument.

The author’s secondary research question, on the degree to which Europe is setting the agenda and acting as a role-model for the rest of the world when it comes to environmental policy, is answered only very briefly. It is stated on one page of the concluding chapter and most of the process of deducing the argument is left to the reader. Another minor negative point is the uncritical listing of social movements’ manifestos. As some of their arguments are more generally accepted than others, some comment on the part of the author would be useful. Overall, this is a very instructive book for anyone interested in the inner workings of the EU or in green causes.

Book Review: The War That Ended Peace: How Europe abandoned peace for the First World War by Margaret MacMillan