In this passionate and exciting account of recent French politics, John Gaffney considers what Charles de Gaulle’s ideas and personality continue to mean for France. Fascinating accounts of the backgrounds and motivations behind Ségolène Royal and Nicolas Sarkozy make this essential reading for those looking to sharpen up their knowledge of French political history, finds Kate Saffin. 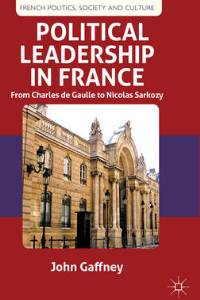 John Gaffney, Professor of Politics at Aston University and the founding Director of Aston’s Institute for the Study of Language and Society, has long offered a deep and thorough analysis of French politics, as his previous book The French Left and the Fifth Republic attests. His latest work, Political leadership in France: From Charles de Gaulle to Nicolas Sarkozy, is an invaluable lesson on recent French political history, showing how the ideas and beliefs of the French have developed alongside political events. Gaffney’s own insights illuminate this epic tale and demonstrate how the unique dynamic between the President, the polity, the institutions and the people of France were forged in the birth of the Fifth Republic in 1958, and are therefore due largely to one man: Charles de Gaulle.

The romantic notions of the Fifth Republic, of chivalry and destiny, were forged in de Gaulle’s own political and military career. De Gaulle had been a General and something of a war hero, or as Gaffney states a “warrior- philosopher”, having resisted the Vichy regime, so proving that he had been right when most others had been wrong. He rode in to Paris in 1944 as the hero of the Resistance, personifying French national pride. He went on to become Prime Minister in 1944, only to resign in 1946 as a controversial figure rejected by the establishment. His departure left a warning that the Fourth Republic was unstable and ready to topple.

Gaffney explains how de Gaulle staged a dramatic and brilliant comeback when it did indeed topple, stepping in to the power vacuum in Paris in May 1958, following the uprisings in French Algeria after Algerian Nationalist fighters had executed three French soldiers. As the already failing Government of the Fourth Republic descended in to chaos and was seen as lacking integrity, de Gaulle was able to play the returning hero who had been proved right yet again. The mythology of de Gaulle is brought in to sharp relief, as Gaffney explores his political ethics and his “fundamental conviction that certain individuals, like himself, were endowed with the wisdom and the duty to impose their view, their will, upon reality”. De Gaulle felt passionately that “the lone individual based his action upon a love for France and a devotional commitment to its well-being”.

Gaffney shows us how de Gaulle’s extraordinary personality brought about a profound increase in the notion of the personal in France’s institutions, where it has firmly stayed. The author argues that when considering any kind of French policy, “party political or constitutional interpretations are inadequate”, and that “the personal within the institutional configuration brings the discursive and rhetorical to the fore, and that their often direct appeal to opinion mobilises opinion, in discourse at least and often in reality”. This in turn strengthens the real or imagined dialogue between the President and the people of France.

What de Gaulle’s ideas and personality meant and continue to mean for the French collective sense of itself is well documented. The further effects on France’s relations with the UK, Germany, USA, China and Russia and the events that shaped these – such as the U2 spy scandal, the Cuban missile crisis, and the Suez crisis – are covered. De Gaulle’s staunch positions on a broad range of international issues of the time, including the Vietnam War, the Israel 6- day War, and the USA’s “treatment of South America as its backyard”, are also given plenty of attention.

Following this solid account of de Gaulle’s life and legacy, Gaffney takes us through the intersecting and interdependent careers of political players such as Georges Pompidou, Giscard d’Estaing, and Jacques Chirac, and shows us how the rise of Francois Mitterrand to leader of the Left, after taking de Gaulle to a second round in the Presidential election of 1965, laid the seeds for the former’s success and the latter’s fall from power.

Jumping to the 2007 election we get a fascinating account of the backgrounds and motivations of both Ségolène Royal and Nicolas Sarkozy and how intense patronage, or the lack of it, was so important in both their careers. The formidable and attractive persona of Royal “triggered in the national imagination all the myths surrounding Marianne”, the national emblem of France, and it was this stunning projection of her actual or perceived personality that made the campaign so electrifying. Gaffney goes on to give an excellent breakdown of the image of Sarkozy; first as the hero, with reference to his major involvement in a hostage situation; then as the minister, important and influential as Budget Minister and “ambitious and impetuous” as he backed wrong horse Balladur over Chirac in a leadership contest; and finally as a lover, with his magazine- filling relationships with Cecilia Albeniz and Carla Bruni.

Unfortunately Gaffney is a bit lenient of the gender and multicultural issues in the polity and in France as a whole. Much could have been said here, the author does not give a clear indication of how the leadership persona will change in today’s society, although he is clear that it will in some form.

With increased European integration on the horizon for the Republic, it will be fascinating to see whether France remains far from comme les autres or if it will have to entertain ideas and ideals that are more transnational. Drama is without a doubt still on the table, and the country’s desire for a passionate leader can be seen in the constant ups and downs of Nicolas Sarkozy’s ratings, as he is considered to be more or less ordinary, or then too bourgeois.

Gaffney has written a passionate and exciting account of recent French politics, and it is essential reading for European Studies students and anyone who would like to increase their understanding of the French political and cultural mind-set. It will be invaluable groundwork for those observing the upcoming Presidential elections of one of our closest neighbours.

Kate Saffin
Dr Kate Saffin has worked as a medical doctor in London, Sydney and Paris and is a qualified General Practitioner. Most recently she completed the Masters in Public Health at King’s College London and has subsequently worked for a think tank and as a freelance researcher in public and health policy. Her research interests lie in international development and the intersections between health, the environment, economics and politics. See more of Kate’s reviews on the British Politics and Policy blog.