A wage led recovery would help reverse inequalities, increase demand, and help the EU to get out of its crisis.

A wage led recovery would help reverse inequalities, increase demand, and help the EU to get out of its crisis.

Mainstream economic thinking holds that low labour costs are key to growth and job creation. Özlem Onaran challenges these assumptions, arguing that low wages have contributed to the rise of the debt-led consumption of the past 30 years, which in turn has led to massive imbalances within Europe and the current crisis. She now calls for a wage-led recovery, a shortening of working hours and an investment in new green industries to lead the European Union out of its crisis.

In the last three decades, neoliberalism has led to a significant increase in the profitability of capital via a dramatic decline in labour’s bargaining power and the share of wages in income in both the developed and developing world, as displayed in Figure 1. This does not even reflect the full dimensions of the loss in labour’s share in some countries like the United States or Great Britain, with dramatic hikes in managerial wages, which makes the fall in the wage share look more modest than it is in reality for the majority of the wage earners. Since the 1980s, this decline in the wage share has accompanied a poor performance in terms of investment, growth, and unemployment in most countries with the exception of a few emerging economies like China and India. 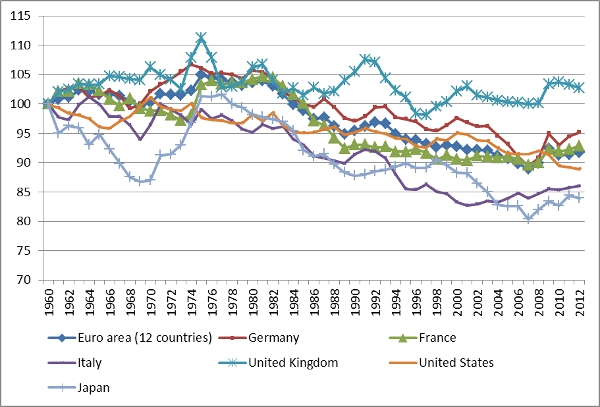 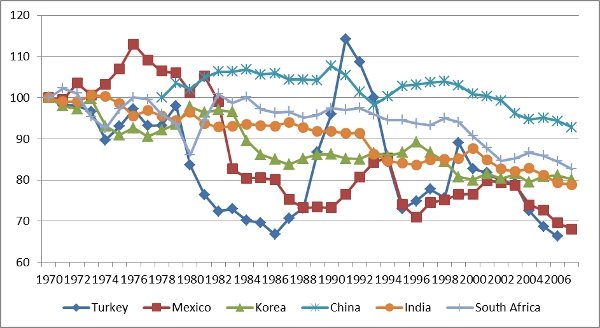 *Adjusted wage share = Compensation per employees * number of employed/ GDP at factor costs other than in China and India.

This stylized fact challenges mainstream neo-classical economic thinking, which sees low labour costs as a key to growth and job creation. However it is no surprise from a post-Keynesian/Kaleckian perspective. Wages are not just costs, but have a dual function also as a source of demand.

Addressing the problem of income inequality is even more important today with the background of the crisis. Debt-led consumption, enabled by financial deregulation and housing bubbles seemed to offer a short-term solution to aggregate demand deficiency caused by falling wage share in countries like the United States, United Kingdom, Spain, or Ireland until the crisis. The current account deficits and debt in these countries were matched by an export-led model and current account surpluses of countries like Germany or Japan, where exports had to compensate for the decline in domestic demand due to the fall in labour’s share. Germany was engaged in one of the most aggressive wage and labour market policies: in the 1990s and 2000s the gap between productivity increases and changes in real wages was one of the largest in Germany; real wages even declined in the 2000s.

This large gap in the 2000s was due to real wage losses, and not necessarily high productivity in Germany. The German case is also in striking contrast to France, where the gap between real wage and productivity growth has been smaller. France did not have Germany’s export boom, but domestic demand and employment growth has been much stronger in the 2000s. With weak domestic demand due to low wages, exports were the main source of growth in Germany, but this has been detrimental for the exports of the peripheral countries in Europe due to both loss of competitiveness and the contraction of demand in Germany. However this neo-mercantilist policy proved to be unsustainable as it could only co-exist with imbalances in the other European countries –an issue, which is now in the epicentre of the Euro-crisis.

The crisis has now become one of incomes and jobs. Wages are under pressure and sharp and persistent increases in unemployment are likely to have further impact. The share of wages in GDP has fallen again since 2010-11 in all the large developed countries along with a further shift of income towards those in the managerial professions. The consequences of this for demand may partly explain why the recovery is so weak and a new recession is on the way. Both the government and the opposition party in the UK agree on the public sector wage freeze with the pretext of defending jobs. However, the dilemma of pay versus jobs is not empirically validated for the UK or the European Union as a whole as well as the global economy at large.  A vicious circle of wage cuts leading to lower growth and fewer jobs may turn the problem of debt to insolvency for the private as well as the public sector.

A recovery led by domestic demand and increase in the wage share would help to reverse a major factor behind the global crisis, i.e. increasing inequality. The push for wage-led recovery can primarily come through a strengthening of the bargaining power of labour. This would correct the increased gap between the changes in productivity and wages in the last three decades. Strengthening the power of the labour unions via an improvement in union legislation, increasing the coverage of collective bargaining, increasing the social wage via public goods and social security, establishing sufficiently high minimum wages, regulating high/executive pay, and levelling the global play ground through international labour standards are the key elements in creating the balance of power relations in favour of a wage-led recovery.

Another key policy measure to increase the wage share is to shorten working hours for all and to offer wage compensation in particular in the case of low and median wage earners, which implies a fall in the profit share. In this way, shorter working hours do not only create more growth via an increasing wage share but also increase the job creation potential of a given rate of growth.

The link between growth and employment can further be enhanced through creating jobs in labour intensive services like education, child care, nursing homes, health, and community services, which are much needed by the society. This could also hit another target of increasing the female labour force participation rates via socializing the invisible and unpaid labour of women. However, these jobs need to be made attractive for both men and women by improving pay and working conditions in these industries.  Thus a new orientation towards high skilled decent service sector jobs should be different from the former reliance on low pay service jobs with weaker labour unions in the United Kingdom.

Finally, the weakening of productive investment has been detrimental for job creation. This has been also related with financialisation and the short-termism orientated towards the maximisation of the dividends to the share holders along with managerial bonuses. A pro-jobs strategy needs to break this orientation and put investments in line with profits as well as stimulating investments via higher demand. Public investment, in particular in new green industries like renewable energy, infrastructure, public transport, and housing would not only make up for the missing investment but also meet the most needed emission targets to address the ecological crisis.

Özlem Onaran – University of Westminster
Özlem Onaran is Professor at the University of Greenwich. She is a member of the Coordinating Committee of the Research Network Macroeconomics and Macroeconomic Policies, a member of the Work and Employment Research Unit of the University of Greenwich, a research associate at the Political Economy Research Institute of the University of Massachusetts, Amherst, and a fellow of the Global Labour University. Her research areas include globalization, crisis, distribution, employment, investment, development, and gender. She has articles in books and journals such as Cambridge Journal of Economics, World Development, Public Choice, Economic Inquiry, European Journal of Industrial Relations, International Review of Applied Economics, Structural Change and Economic Dynamics, Eastern European Economics, Capital and Class, Review of Political Economy.

Spain is experiencing a period of intense social crisis.