For many, Front National’s Marine Le Pen’s result of 18 per cent of votes cast in this week’s French presidential elections came as a surprise. Not for Jocelyn Evans and Gilles Ivaldi who had predicted this result last month on EUROPP. As part of our continuing series covering the French elections, they argue that this result does not represent a seismic change in the fortunes of the Front National, and that it is unlikely that they will do as well in June’s legislative elections.

Last month we wrote on EUROPP, forecasting Front National’s (FN) Marine Le Pen’s performance in the first round of the 2012 French presidential elections. Our model, first reported in January of this year in a special issue of French Politics, used a simple econometric specification including unemployment and immigration levels to estimate support for the FN in legislative and presidential elections since 1974. Given this model was based solely upon the performance of Jean-Marie Le Pen at presidential level, we adjusted for a ‘Marine effect’, using party performance in sub-national elections during her leadership, and arrived at a forecast of 17.4% for the 22 April ballot.

This prediction, reported in rounded version as 17% in our previous post, turned out to be very close to the mark. Marine Le Pen polled 17.9%, placing her third to François Hollande and Nicolas Sarkozy, and soundly defeating Jean-Luc Mélenchon, who placed fourth on 11.1 per cent, despite polling estimates during the latter stages of the campaign suggesting he could challenge the far right candidate for the status of ‘le troisième homme’ [sic]. As far as we are aware, no other model has provided a more accurate estimate of her performance. Moreover, with a four month lag, the model also outperformed polling estimates, including those derived from exit polls on election night. A number of polling institutes did not enjoy great success in estimating Le Pen’s vote, including Ipsos-MORI, whose first official estimate reported on French media gave her 20% of the vote, at the expense of the incumbent president’s score.

That retrospective model with a small sample performed so well so many months before the election is the source of no small satisfaction to us. As Figure 1 illustrates It outperformed polls which gave an admirable account of the frontrunners’ performance on election night. This is a bonus, not just in terms of precision but also in the light that it sheds upon polling and the performance of the far right in France. 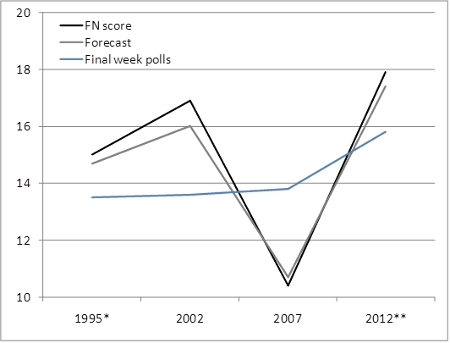 French polling institutes have been chasing their tails trying to identify a sure method of polling ‘true’ estimates for Jean-Marie Le Pen since the notorious underestimation of 2002 (-3.3 points on average), where they failed to anticipate a second place ahead of Lionel Jospin, the Socialist candidate. Fearful of underestimating his support in 2007, apparently the sondeurs over-corrected, and thus significantly overestimated his performance (+3.4), which appeared to signal a collapse of support for Le Pen and his party. We say ‘apparently’, because French polling institutes are not required to report their unadjusted figures or methods of adjustment – a licence of which they all take advantage in protecting in-house trade secrets.

It appears that, given Marine Le Pen’s reputation as a ‘softer’ candidate who was engaged in the dédiabolisation of the party, polling organisations felt that the previous reticence of respondents in reporting a likely Le Pen vote had disappeared, and therefore stopped adjusting. Only TNS-Sofres reported a 17 per cent poll in the last week before the campaign, with BVA and LH2 reporting 14 and 15.5 per cent respectively. These are not dramatic under-estimates (-2.1 on average), but they are noticeably more out of kilter than polls for the two eventual winners of the first round.

This matters as we enter the run-off campaign. A sense of anticipated failure, or at least mediocre performance, accompanied the last month of Le Pen’s campaign, with the dynamic populist Mélenchon on the radical left promising to challenge and perhaps beat the far right into fourth place. A sense of shock at admittedly the FN’s best performance ever – 6.4 million votes in total – has nonetheless exaggerated the impact of Le Pen’s performance. Initial reporting at between 18.5 and 20 per cent further inflated a sense of France witnessing a surge in far right support unprecedented in its forty-year history under the FN banner.

As we have noted elsewhere the performance does not represent a seismic change for the FN which traditionally does well in presidential elections. Taking into account the natural increase in size of the French electorate shows that Marine Le Pen has won about the same number of votes proportionally as the two Extreme Right candidates ten years ago. Little surprise, then, that a fresh leader for the far right party would garner greater support. Indeed, Le Pen’s performance must self-evidently be in line with previous elections if the retrospective model, with a small adjustment of 2 per cent, could predict it so accurately.

What does the score of 17.9 per cent imply for the second round? What use in predicting election scores, if we cannot say what those scores imply? Whether or not the numbers were predictable, the relatively tight race between Hollande and Sarkozy, accompanied by polls suggesting a much less straitened gap in the second round, mean that this performance by Le Pen makes her the ‘kingmaker’ that seemed to be François Bayrou’s position to claim, as was the case in 2007. Brutally, without the vast proportion of those 6.4 million votes (and an equally sizeable proportion of Bayrou’s supporters), Nicolas Sarkozy cannot hope to remain in power. Given her repeatedly savaging the so-called ‘UMPS oligarchy’, Le Pen is highly unlikely to guide her voters in that direction – or any direction. It seems increasingly clear that at the traditional 1st May speech in Paris, she will instruct her voters to ignore both candidates, in the expectation that this death-sentence on Sarkozy’s hopes of returning to power will in turn fatally weaken the UMP, and leave the way open for a number of FN legislative seats, if not for the party to become the new leading ‘party of the Right’.

Then will come the ‘real-world’ test for the FN. Once the presidential turmoil has settled, Le Pen’s party will confront key challenges in the legislative elections later this year. Our statistical model shows the FN tends to do less well generally in legislative ballots. It is therefore unlikely that Le Pen’s high-tide presidential score will be replicated come June. Second, the majoritarian electoral system continues to play against peripheral actors in French constituencies, as recently demonstrated in the 2011 cantonals, despite the FN’s record performances across the country. Lastly, with little if any coalition potential, the Extreme Right can only hope to play its traditional role as ‘nuisance’. The institutional logic demands that the UMP should inevitably suffer legislative losses in the wake of Sarkozy’s probable defeat. The electoral revival of the FN only threatens to make such losses bigger.

Jocelyn Evans – University of Salford
Jocelyn Evans is a Professor of Politics at the University of Salford. He is also an editor of Palgrave Macmillan’s’French Politics, Society and Culture’ monograph series. His research interests cover European politics and electoral behaviour with a particular focus on France. He also works on electoral forecasting, especially predicting third-party support. Currently, Evans is working on a book on the 2012 French elections together with Gilles Ivaldi and James Shields.