Since the introduction of the EU’s Emissions Trading Scheme (ETS), there has been a surge in low carbon technology. Yet, Raphael Calel and Antoine Dechezleprêtre argue that this increase in low carbon innovation has not been a result of the ETS. Their research indicates there is actually little difference in patenting rates for low carbon technologies between countries that are and are not part of the scheme.

The European Union Emissions Trading Scheme (EU ETS) was launched in 2005 and is today the world’s largest carbon market, covering roughly 40 per cent of the EU’s total greenhouse gas emissions. It is the main instrument of European climate change policy, and many policy makers envisage it as a driving force of the EU’s transition to a low-carbon economy. By putting a price on greenhouse gas emissions, the Scheme is expected to encourage heavy polluters to reduce their emissions and to develop new low-carbon technologies. At first glance, it is encouraging to notice, then, that patenting for low-carbon technologies has surged in Europe since 2005. However, when analysing a newly constructed data set we find compelling evidence that the EU ETS cannot explain this surge, and so far has failed to encourage companies to develop new low-carbon technologies.

A surge in low-carbon innovation

A substantial theoretical and empirical literature argues that when companies become subject to a new environmental regulation, they will direct additional resources toward developing new technologies that reduce their emissions of the regulated substance. The EU ETS launched in 2005, so is there any evidence of an increase in low-carbon innovation? 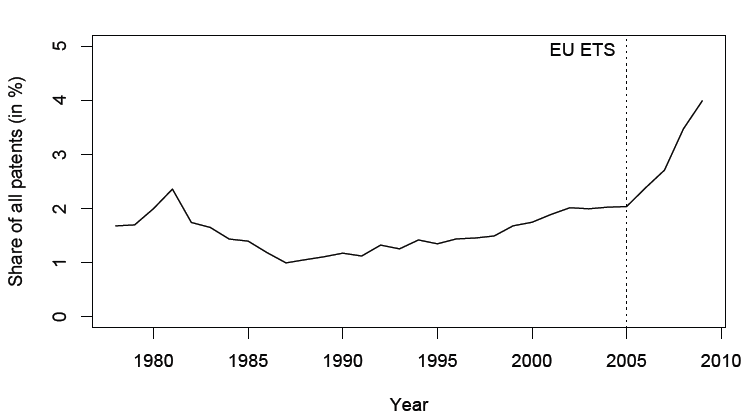 Figure 1 shows that the share of patents filed at the European Patent Office to protect low-carbon technologies has varied between 1 and 2 per cent over the past three decades. Looking at the share helps us take account of the rising total number of patents has over time. A sharp increase in the share is visible starting in 2005. Could this be due to the EU ETS?

This preliminary evidence provides grounds for optimism, but other factors might explain the surge in low-carbon innovation. One candidate is higher oil prices. When fossil fuels become more expensive companies may try to develop new technological solutions that reduce their fuel use, and hence their carbon emissions. Figure 2 shows that the surge in low-carbon innovation has indeed followed on the heels of rapidly rising oil prices. How can we determine whether the surge is a result of the higher oil prices, the EU ETS, or some other change occurring in the early 2000s?

The EU ETS now regulates the emissions of around 11,000 power stations and industrial plants in 30 countries. Several thousand companies own and operate these installations, but there are many more companies that are not directly affected by the Scheme. To separate the impact of the EU ETS from other factors that might explain the surge in low-carbon innovation, we can compare companies covered by the EU ETS with those that are not. 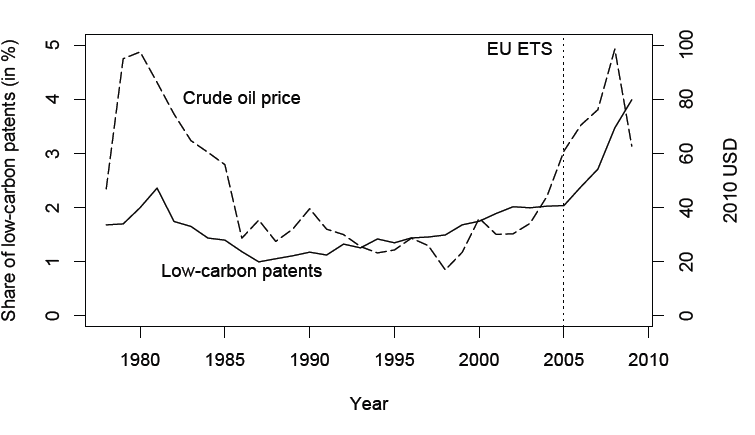 Using a newly constructed data set, we can compare a group of over 700 companies that -by virtue of operating at least one sufficiently large installation – came under EU ETS regulations in 2005, with a group of roughly 1,000 comparable companies that were exempted. Before 2005, these two groups of companies were similar in size, in patenting activities, and operated in the same countries and economic sectors. Both groups would have faced similar macroeconomic conditions (e.g. oil prices) throughout the period. But starting in 2005 they faced different regulatory obligations for their greenhouse gas emissions. 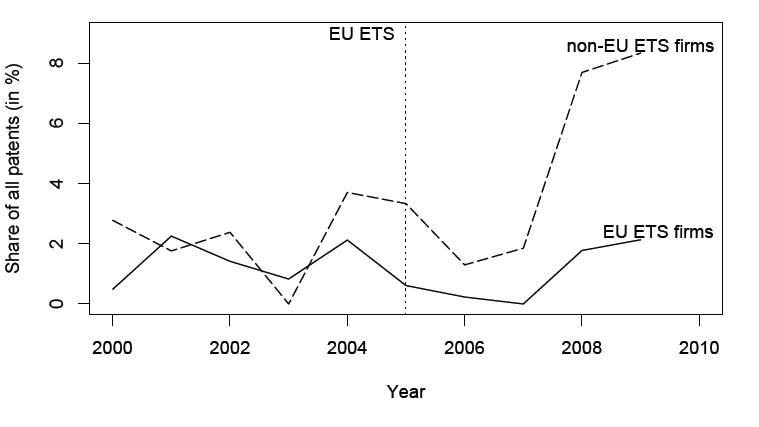 Figure 3 shows the share of low-carbon patents for these two groups of companies in the five years prior to the EU ETS launch and the five years since. The firms look roughly similar over the period 2000-2004. The pattern has also been much the same across the two groups since 2005 – if anything, it looks as though the response has been greatest among the non-EU ETS firms. When we take account of the different starting level in 2005, however, we notice that the shares of low-carbon patents filed by the two groups have risen by a similar multiple. More sophisticated statistical estimation procedures confirm this basic finding – since 2005 low-carbon patenting has developed in much the same way among comparable EU ETS and non-EU ETS companies.

Low-carbon innovation is up, but not because of the EU ETS

On the face of it, there could be a number of explanations for this finding, only one of which is that the EU ETS so far has failed to encourage companies to develop new low-carbon technologies. We investigated a number of causal and technical explanations – looking at the patent filings from an additional 2,000 EU ETS regulated companies that could not be successfully compared in the first instance, looking at patenting by unregulated competitors, patenting by third-party technology suppliers, biases arising from study design and omissions of important control variables, etc.. While it is not always possible to conclusively rule on these hypotheses, we find evidence that none offer a compelling alternative. We are left to conclude that, while low-carbon innovation is up, it is not because of the EU ETS.

The EU ETS forms an integral part of the European Union’s roadmap to a low-carbon economy in 2050. Moreover, policy makers in the process of implementing new carbon market programs in New Zealand, the North-Eastern United States, Australia, and elsewhere, can learn from the EU ETS experience. Emissions reductions in past emissions trading programs like the US Acid Rain Program have come largely from operational rather than technological changes, and the same appears to have happened with the EU ETS. New low-carbon technologies are needed, but our findings suggest that the EU ETS in its current form might not be enough to incentivise low-carbon technological change.

At this point we can only speculate about the reasons for this failure. Many have argued the EU ETS would not encourage innovation because it has provided overly generous allocation of emissions permits, and awarded permits to polluters free of charge. Future changes to the rules of the EU ETS may provide opportunities to answer these specific charges. To the extent that these factors account for our findings, however, there are relatively clear policy implications – tighten the emissions cap and/or sell permits instead of giving them away free. The current move to set aside permits, as well as the increased reliance on auctions to distribute permits in the third trading phase, would in these cases appear to be moves in the right direction.

This article first appeared on the British Politics and Policy at LSE blog on 1 May.

Raphael Calel is a doctoral researcher at LSE’s Grantham Research Institute. He also teaches Applied Environmental Economics in the Department of Geography and Environment.  (r.calel@lse.ac.uk)

Antoine Dechezleprêtre joined the Grantham Research Institute on Climate Change and the Environment in October 2009 as a Post Doctoral Researcher. (a.dechezlepretre@lse.ac.uk)

* Raphael Calel is grateful for funding provided by the ESRC and the Jan Wallander and Tom Hedelius Foundation. Antoine Dechezleprêtre gratefully acknowledges the support of ADEME and of the ESRC under the ESRC Postdoctoral Fellowship Scheme (award no: PTA-026-27-2756). The authors would also like to thank Xavier Vollenweider for excellent research assistance.