The EU’s Emissions Trading Scheme (EU ETS) was launched in 2005 as a major part of Europe’s strategy for tackling climate change. As Raphael Calel and Antoine Dechezlepretre write, at its launch, there were fears that the scheme would not offer sufficient incentives to encourage research in low carbon technologies. Based on an analysis of European companies before and after 2005, they find that low carbon innovation has increased substantially, but that this increase cannot be accounted for entirely by the launch of the scheme.

The share of patents filed at the European Patent Office to protect low-carbon technologies has varied between 1 and 2 per cent over the past three decades, as shown in Figure 1. A sharp increase in the share, from 2 to 4 per cent, is visible starting in 2005, but other factors, like rising oil prices, might explain the surge in low-carbon innovation over the same period. 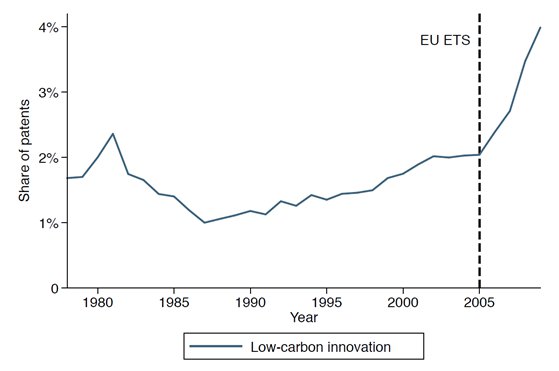 We compared nearly 3,500 companies that, by virtue of operating at least one sufficiently large installation, came under EU ETS regulations in 2005, with over 4,000 comparable companies that were exempt. Before 2005, these two groups were similar in size, in patenting activities, and operated in the same countries and economic sectors. Both groups would have faced similar macroeconomic conditions, but from 2005 they faced different regulatory obligations for their emissions.

The firms look similar over the period 2000-2004, but since the EU ETS launched in 2005, EU ETS regulated firms have started filing more patents to protect low-carbon technologies (see Figure 2). We estimate that EU ETS firms have increased their low-carbon patenting by about 10 per cent compared to a counterfactual scenario without the EU ETS. Europe-wide, however, because EU ETS firms are only responsible for about 10 per cent of low-carbon innovation, this increase translates into less than a 1 per cent rise in low-carbon patenting: hardly enough to account for the post-2005 surge visible in the aggregate data. 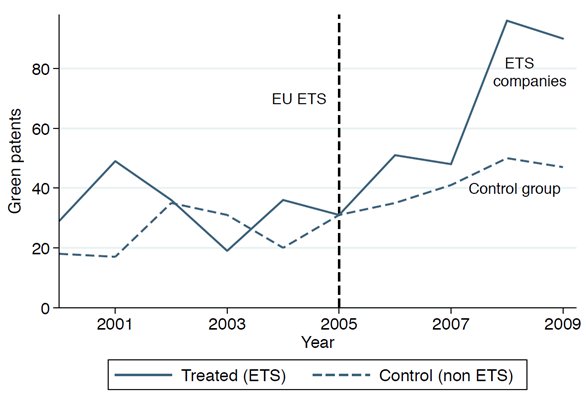 We investigated a number of causal and technical explanations for these findings – changing our estimation sample, looking at patenting by unregulated competitors, patenting by third-party technology suppliers, biases arising from measurement error, omissions of important control variables, etc. – and find evidence that none offer a compelling alternative. We are left to conclude that the EU ETS has stimulated a strong response from regulated firms. However, we estimate that the EU ETS has in total spurred the creation of an additional 200 patents compared to a scenario without the EU ETS. This amounts to around 2 per cent of the observed increase in low-carbon patents filed at the EPO since 2005.

The EU ETS forms an integral part of the EU’s roadmap to a low-carbon economy in 2050, but there remain different views about its ability to bring about low-carbon innovation on a large scale. On the one hand, many have argued the EU ETS would not encourage innovation because it provided overly generous allocation of emissions permits, and awarded free permits to polluters. Our findings indicate that EU ETS firms have responded quite strongly, which casts some doubt on this proposition. On the other hand, the European Commissioner for Climate Action Connie Hedergaard was recently quoted as saying that “the ETS remains the engine to drive low-carbon growth in Europe.” New low-carbon technologies are needed, and the post-2005 surge suggests they may in fact be on their way, but our findings also indicate the EU ETS in its current form might not be the engine behind Europe’s low-carbon innovation.

A longer PDF version of this material is available here.

In their row over gas prices, Russia has no reason to make concessions to Ukraine. There is little to suggest that an end to the conflict is in sight.

Instead of simply paying for losses, Europe should institute cost-effective adaptation measures to meet the challenges posed by climate change.