This Sunday sees incumbent French president Nicolas Sarkozy face off against his Socialist challenger François Hollande in the final round of the French election. After a debate this week where neither candidate was able to land a knockout blow, Françoise Boucek looks at polling for both candidates, finding that despite some positive perceptions of Sarkozy by the French public on competence and decisiveness, Hollande is likely to win the day on Sunday.

As the 2012 French presidential campaign enters its final day, Socialist contender François Hollande maintains his lead over incumbent Nicolas Sarkozy who suffered another blow last night. The leader of the centrist Mouvement Démocrate, François Bayrou, who came fifth with 9.1 per cent of the vote in the race’s first round, announced that he would vote for François Hollande in Sunday’s decisive vote. Hollande is still ahead in the polls by 5 or 6 per cent.

Already at Tuesday’s May Day parade National Front (FN) leader Marine Le Pen who came third in the first round with 17.4 per cent of the vote declared she would cast a blank vote diminishing Sarkozy’s hope to capture a large FN vote. Sarkozy has also recently lost the support of centrist figures including Philippe Douste-Blazy, who was responsible with others for creating Sarkozy’s party, the UMP, ten years ago. If Sarkozy is defeated on Sunday it would be the second time only during France’s 5th Republic that a sitting president fails to secure a second mandate (Valéry Giscard d’Estaing was the first in 1981).

In a televised debate Wednesday before nearly 18 million viewers Sarkozy and Hollande slugged it out for three hours mainly over economics with neither landing a knockout blow nor racking up a decisive number of points. In a post-debate poll by Ifop-Fiducial respondents felt Hollande had been more convincing (45%) than Sarkozy (41%).

Calm and well-briefed Hollande portrayed himself as the candidate of national unity and reconciliation in contrast to partisan and clannish President Sarkozy. Hollande hit back at Sarkozy who frequently accused him of lying about economic policy. By lumping together Sarkozy’s 5-year presidential term with his previous appointments as Minister of the Interior, Finance, and Budget, Hollande seemed to want to draw attention to his ‘fresh start’ appeal and away from his ministerial inexperience in contrast to Sarkozy’s lengthy, polarising and divisive political career.

Sarkozy failed to capitalise on the polls’ recent narrowing gap in his favour and voters’ positive perceptions of the president as the most competent, most decisive  and the candidate with ‘most authority’, as shown in Figure 1. However, he remains very unpopular according to the latest poll on 2 April by TNS Sofres/Logica/Le Figaro Magazine (63 % have a negative opinion and 33 % a positive opinion). Sarkozy contrasted his violence-free presidential term to Mitterrand’s tumultuous presidency marked by mass protests against education reforms. He called Hollande ‘a little slanderer’ and attacked his ‘mad’ plans to tax the rich saying ‘I want to diminish the number of people living in poverty while you want to diminish the number of rich people’. 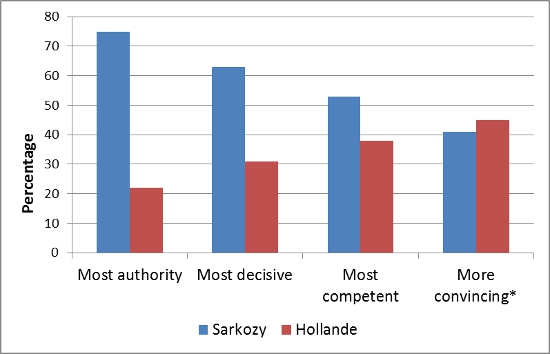 Nevertheless, Sarkozy appeared increasingly rattled by Hollande’s frequent interruptions pointing out inaccuracies in the president’s figures and statements. Surprisingly, Sarkozy didn’t break the flow of Hollande’s final litany. With the phrase – ‘Moi, President de la République je…’ – repeated fifteen times, Hollande announced what sort of president he would be almost as if his victory was already a fait accompli. This brought to mind Labour leader Neil Kinnock’s infamous chant ‘we are alright!’ in the Sheffield Arena on the eve of the 1992 British general election when the Conservatives were re-elected against the odds.

Unfortunately for French voters this campaign’s only face-to-face confrontation failed to put clear blue water between the two presidential candidates. Since Hollande rejected Sarkozy’s suggestion of three shorter and more focused campaign debates this was the only opportunity for the electorate to identify the differences between the candidates’ programmes and weigh the priorities.

However, experts who decoded and critiqued the candidates’ arguments about the nation’s unemployment, trade deficit, public debt and other measures reveal a list of inaccuracies and confusions. On unemployment and migration flows candidates’ figures were based on different statistics. On public debt, Hollande overstated the increase while Sarkozy exaggerated Hollande’s error. On external trade deficit both candidates confused the issue, Sarkozy by talking only about manufactured goods and Hollande about total trade.

Little time was left to talk about non-economic issues. On education, the debate degenerated into arguments about how many posts had been cut under Sarkozy; how many would be created under Hollande and at what speed; Sarkozy’s plan to increase existing teachers’ working hours and pay and so on. On immigration, Hollande got muddled up in recalling his own view on retention centres and Sarkozy grossly confused  the term ‘migrants’ with Muslim people when talking about foreigners’ right to vote in municipal elections. Sarkozy’s negative views on immigration are pushing centrist voters and senior figures towards Hollande. On energy the protagonists argued endlessly about the closure of one nuclear power plant despite the moderators’ interjections that they should move on.

What about Europe and the fiscal pact that Hollande promised to renegotiate? No further light was shed on this inter-governmental agreement during the debate other than Hollande’s renewed insistence that European austerity measures must be counter-balanced by growth-promoting measures. European Council President Herman Van Rompuy had recently stepped up his effort to avoid having to renegotiate the fiscal treaty in light of François Hollande’s probable election. However, he is now seeking to convene an extra European Council meeting at the end of May to discuss how to boost growth in Europe.

In a show of unity German Chancellor Angela Merkel and Italian Prime Minister Mario Monti have agreed that their parliaments would ratify the treaty and the Eurozone’s permanent bail-out fund on the same day. But elsewhere in Europe politics are topsy-turvy. In the Netherlands and the Czech Republic coalition governments have collapsed. In Germany two state elections are looming (Schleswig-Holstein on 6 May and North-Rhine Westphalia on 13 May). And, on Sunday, Greek voters will go to the polls to elect a new government as French voters chose their next president. No wonder Von Rompuy wants to get François Hollande on board. Prepare for a bumpy ride in the Eurozone ahead of the next European Council meeting on 28-29 June.

This article is part of EUROPP’s series on the French presidential elections 2012. You can browse the entire series here.

Françoise Boucek –School of Politics and International Relation, Queen Mary University of London
Françoise Boucek is a Teaching Fellow in European Politics in the School of Politics and International Relations at Queen Mary, University of London, a Visiting Professor at the University of Witten Herdecke (Germany) and an Associate of the LSE Public Policy Group. A political scientist, she gained her PhD from LSE and researches chiefly on party politics in advanced industrial countries. Her book Factional Politics: How Dominant Parties Implode or Stabilize (Palgrave Macmillan) is due out in October 2012. She is also co-editor (with Matthijs Bogaards) of Dominant Political Parties and Democracy: Concepts, Measures, Cases and Comparisons(London: Routledge, 2010).