Sofia Vasilopoulou and Daphne Halikiopoulou reflect on last week’s elections in Greece, finding that voters have deserted the more centrist parties that have been popular in the past, in favour of parties on the extreme right and left. Divisions between parties over Greece’s bailout and austerity mean that the formation of a coalition government is unlikely; new elections in June are now a strong possibility.

The results of last week’s elections in Greece have been inconclusive, with no party being able to form a government or cobble together a coalition. As a second election is now looking increasingly likely, the Greek electorate faces the following dilemma: either to vote for the centre-left Panhellenic Socialist Movement (PASOK) party or the centre-right New Democracy party (ND), both of whose ideologies are mainstream and respectable but the parties themselves are closely associated with clientelism, favouritism and stagnation; or the fringe parties which are not closely linked to clientelism but whose radical and/or extreme positions could play dangerous games with Greece’s future. Punishment is necessary. After all accountability should be a defining feature of any democracy. But at the same time, the Greek people must look ahead and vote with ensuring a viable future in mind. Unfortunately this catch 22 defines the Greek choice.

The electoral result of May 6th shook some of the main pillars of the post- 1974 Greek political system, breaking down the two-party domination of the political scene. Confirming the pro and anti-bailout cleavage, it resulted in a record low combined result of 32% for the two main parties PASOK and ND, which in past elections have gained high percentages in the range of 30% and 40%, and invariably formed strong majority governments, occupying together 80% or more of the parliamentary seats. This time, the most popular party was ND with a mere 18.85% of the vote, while PASOK gained 13.18% which corresponds to 41 seats, which is 120 fewer than in 2009 (see figure 1 below). The election was also characterized by a low turnout; approximately 35% of Greek voters abstained, a very high percentage for Greek standards. Indicatively, turnout was 70.92 in 2009 and around mid 70 in 2007 and 2004. 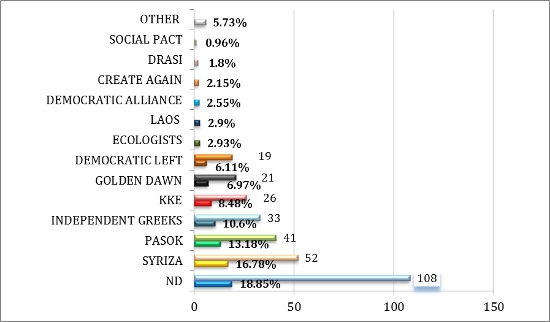 Note that parties that did not achieve the 3 percent electoral threshold did not receive any parliamentary seats.

By contrast, the anti-bailout, anti-establishment and populist forces were triumphant. The new parliament consists of 7 parties, a large number for Greek standards, many of them populist and extreme. Each of the non-populist parties that put forward a responsible agenda (whether one agrees or disagrees with their policies) did not receive the required 3 percent and hence did not enter parliament. Among others these include the liberal Drasi (led by Stefanos Manos), Democratic Alliance (led by Dora Bakogianni) and Create Again (led by Thanos Tzimeros). But added together, the parties that did not make it into parliament make almost 19 percent; this leaves a substantial percentage of the Greek electorate without representation. It is likely that in the next election the liberals will run together.

The clear winners are the parties of the radical left and radical right.  The latter camp includes Panos Kammenos’ Independent Greeks, a newly formed populist radical right party by a former ND MP, a firm supporter of the anti-bailout camp whose agenda is characterized by the principles of Greek nationalism. With 10.6% of the votes cast, they gained 33 seats in the new Parliament, many of which will be occupied by famous actors, singers and models.  By contrast, the radical right LAOS, which had joined the coalition government, did not receive the required 3 percent.

However, the most worrying result is the election of the Golden Dawn with 6.97% of the votes cast and 21 parliamentary seats. The Golden Dawn is an extreme right- wing party reminiscent of the 1930s. It is a nazi militant organization whose election into the parliament for the first time was marked by threats along the lines of ‘those who betray the Greek nation should be afraid. We are coming!’ At a press conference in which the leader made his first post-election public speech, journalists were presented with the military commandment ‘All rise’; those who didn’t comply were forced to exit the room.  Golden Dawn members are street soldiers that endorse the pillars of the nazi regime such as violence, discipline and ultimate respect for the leader. They praise nazi practices and openly support ideas such as the elimination of Jewish people. They do not only target immigrants indiscriminately, but also those ‘Greek traitors’ who do not support the nazi cause. Many have criminal records for crimes including robberies, grievous bodily harm and stabbing. They are proud of this.  The elevation of their status to MPs has granted them Parliamentary immunity, i.e. partial exemption from the law.

Unfortunately support for this party was widespread nationwide.  Initial estimates expecting the Golden Dawn to do well in deprived areas of Athens by attracting vulnerable sections of the population were not confirmed. The party received a large percentage of the vote across the country whether urban or rural, often in some constituencies being the second or third largest party. In the constituency of Korinthia it received a massive 11.3 percent. Initial polling data analyses indicate that the majority of Golden Dawn voters are male between the age of 18 and 50, of low education background.

But the biggest winner is the radical left SYRIZA with 16.78% and 52 seats, a significant increase of 12 percentage points compared to the 2009 elections. For the first time in the post-dictatorship period a ‘small’ party comes second, beating PASOK in the third place. SYRIZA is anti-memorandum (the Memorandum of Understanding between Greece and the IMF which outlines how Greece will reform its economy in exchange for the IMF’s bailout), but presents itself as pro-EU. Although it has made clear that its prime aim is to cancel the terms and conditions of the bailout, it is not clear how the party will pursue its policies and re-negotiate (in their own terms ‘cancel’) the bailout within the context of the Eurozone.

The two formerly big parties with a pro-memorandum agenda (PASOK and ND) cannot form a ‘grand coalition’ without the help of a third party, because together they occupy only 149 of the total 300 seats. When ND, as the largest party, this week failed to form a coalition, the task fell on Aleksis Tsipras, the leader of SYRIZA. But he claims that he wants to form a left-wing government coalition, rejecting co-operation with either PASOK or ND unless they agree to formally sign a rejection of the EU/IMF deal, which they have both formally signed.

As negotiations continue, the likelihood of a coalition government is low. Tsipras is engaged in a political game in which the stakes are high: the possibility of his party becoming government in the next election round. For him, entering into a government now would not make political sense. This government would be short-lived and would become eroded by the requirements of pragmatic policies; whereas the continuation of a populist rhetoric aimed at a very angry electorate that has paid the price of austerity is likely to result in a second election where SYRIZA could be voted the first party, if not a strong majority. This will give him the 50 bonus seats granted by the electoral system and thus greater leeway and enough seats to pursue his anti-bailout agenda by forming a coalition consisting of parties of the left.

Fotis Kouvelis, the leader of the Democratic Left could also prove an important player as PASOK and ND are attempting to form a grand coalition which depends on his cooperation. But he appears difficult to persuade, arguing against any government which doesn’t include the second largest party (SYRIZA). As the task of forming a coalition is passed onto the leader of PASOK on Thursday, negotiations are continuing.

But unfortunately, beyond winning political games, all this has significant consequences for Greece and Europe. Besides the obvious costs of another election in a country that can hardly afford them and the waste of precious time in terms of important decisions that need to be taken, the unstable electoral result and the likelihood of a second electoral round makes Greece appear even less credible abroad. At stake is Greece’s future in the Eurozone and European Union.

One important lesson learned is that Greece needs cooperation between the various domestic political forces, but Greek  parties do not seem ready or willing for this. Perhaps the technocratic cooperation government, despite lacking popular legitimacy, ensured greater stability in highly unstable times.

European questions have intruded into the French election campaign, signalling that the next European Parliamentary elections may be the first truly European ones.

Since the beginning of the economic crisis voters have punished incumbent governments for rising unemployment, but not for rising income inequality.