In recent years, Eurozone governments have developed safety nets to deal with the economic and financial crisis, but these have been developed in a trial and error fashion.  Michiel Bijlsma and Shahin Vallee argue that we must build on the current European Financial Stability Facility and the European Stability Mechanism with further policies that will help to resolve the banking crisis, by issuing common debt (Eurobonds), and by promoting the idea of fiscal transfers within the EU.

The financial crisis has exposed the need to devise stronger and broader international and regional safety nets in order to deal with economic and financial shocks and allow for countries to adjust. The Euro area has developed several such mechanisms in recent years through a process of trial and error and gradual enhancement and expansion. However, their overall architecture remains imperfect and leaves areas of vulnerabilities.

Europe suffers from three simultaneous and mutually reinforcing crises: banking crises, fiscal crises, and balance-of-payment (BOP) crises. Each can occur because of transitory liquidity shock or a more permanent solvency problem but the lines are very often blurred and the associated policy response therefore often uneasy. Table 1 shows the various categories of crises and the existing solutions. 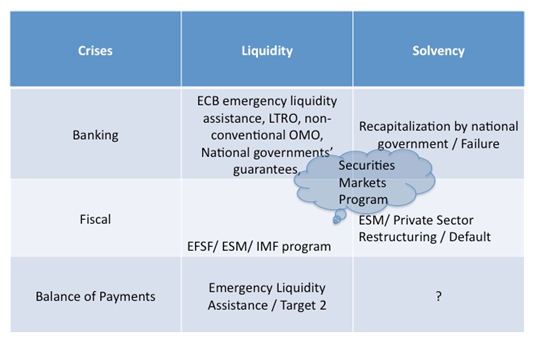 In May 2010, European governments created the European Financial Stability Facility (EFSF) and thereby started a process of strengthening financial safety nets in order to deal with fiscal crises. But the original design of the EFSF was inadequate and led to the creation of a more permanent and solid European Stability Mechanism (ESM). Until very recently, this mechanism was largely unequipped to deal with banking crises and to provide the type of ongoing risk sharing mechanisms that would allow balance of payment imbalances to adjust. As a result, this gap was met by the ECB, which provided liquidity probably over and above what it would have tolerated if there was a proper banking resolution mechanism in place and if there were more transparent ways to allow for capital to flow across national borders.

This architecture is constantly evolving, which requires a more systematic and methodological approach. Creating financial safety nets involves a trade-off between moral hazard, insurance, and contagion, since unconditional insurance diminishes the prevention effort on behalf of the insured, while too-much insurance can threaten the sustainability of the insurer resulting in a domino-effect. In addition, as Jean Tirole argues here, the current situation brings additional complications because insurance has to be provided after the fact, when ‘the veil of ignorance is lifted’, resulting in a focus on avoiding collateral damage inflicted by a country in distress.  Real contractual insurance for countries before they run into difficulties, might (but does not necessarily) involve solidarity like joint-and-several liabilities.

Indeed, this kind of solidarity is still in the process of being defined and three stumbling blocs need particular attention: (i) insurance related to the banking system, which remain inexistent so far, (ii) insurance for large countries under stress that cannot be dealt with by the ESM as it is constructed, and (iii) and insurance in the case of protracted external imbalances that result in unsustainable debt levels.

The ESM is an embryo for banking crises resolution. It is hard to see how its role as a financier of bank restructuring can be addressed separately from an integral banks restructuring and resolution framework. When faced with banks in distress that are not yet in default, regulators face a choice between several measures including recapitalization, ring fencing bad assets, restructuring creditors’ claims, temporary nationalization, and sale to private parties. Restricting the ESM’s role to a pure financier creates a bias towards blanket recapitalization. Furthermore, there are cross-border externalities. This calls for an institution that can internalize those effects.

Fiscal crises in large countries can only be overcome with ECB liquidity provisions to the ESM, if a default is to be avoided. This can be achieved directly through large interventions or through ESM access to an ECB discount window.

Another option would be common debt issuance by countries. Many challenges remain but eurobonds would ensure favorable market access without ECB involvement in the short-run and could also prevent future crises. It would cut the feedback-loop between sovereigns and banks if banks hold eurobonds instead of national debt. These proposals require deeper institutional reforms, and they need to address moral hazard concerns.

3. Transfers inside a monetary union and lack thereof

In the words of Tirole, the lack of exchange rate adjustments ‘precludes soft default and generates hard default.’ In other words, currency risk turns into default risk. If such default is to be prevented, for example because of collateral damage due to contagion effects, monetary unions should have strong financial safety nets, which can amount to financial transfers between countries. But legal provisions limit these transfers in EMU. Nevertheless, several risk-sharing arrangements have already been created (e.g. through TARGET2 or bilateral, EFSF or ESM loans).

The alternative to transfers is pure internal adjustment, by lowering wages and prices, fiscal devaluation, or spending cuts. But wage adjustment can be too slow because of prolonged uncoordinated bargaining between employers, employees and the government, while spending cuts can -under special circumstances – be costly to the point of being self-defeating.  If internal adjustment is not possible and hard default is to be avoided, more pooling of shock absorbing policies at the European level is required. However, this involves the politically sensitive topic of transfers. Ultimately, if members cannot agree on transfers, orderly default mechanisms for countries need to be installed. One might even consider whether such default mechanisms should involve euro exit. However, the mere possibility of currency union exits would make such a union inherently unstable. 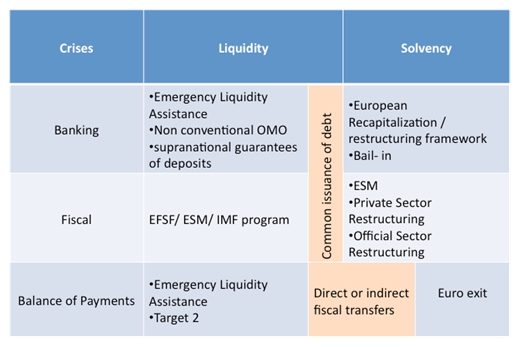 A version of this article was originally published on the Bruegel Blog.

Michiel Bijlsma – Bruegel
Michiel Bijlsma joined Bruegel as a visiting fellow in January 2012. Michiel is program leader financial markets at the Netherlands Bureau for Economic Policy Analysis (CPB). He has a PhD in theoretical physics from the University of Utrecht, and is an extramural fellow at Tilec, University of Tilburg. His work at Bruegel focuses on the added value of the financial sector and structural differences between the financial sector in Europe and in the United States. Michiel’s research is in the areas of Corporate Governance, Banking, and Health Care markets. He has co-authored popular Dutch books on the 2007-2008 financial crisis and the current European debt crisis.

Shahin Vallée – Bruegel
Shahin Vallee is has been a Visiting Fellow at Bruegel since October 2010. His research interest is essentially focused on international macroeconomics but he is also particularly interested in the all research areas at the intersection of financial markets and public policy. He is working in particular at Bruegel on the international monetary system, European economic governance and monetary and macroprudential policy.From July 1 July 2012, Shahin has been appointed to the Cabinet of President Van Rompuy as an economic advisor.