Brussels blog round up for 11 – 17 August: 5 years of growing unemployment in Spain, the return of the lira in Italy, and is Germany in for a summer of discontent?

Brussels blog round up for 11 – 17 August: 5 years of growing unemployment in Spain, the return of the lira in Italy, and is Germany in for a summer of discontent?

Au Café de l’Europe has an interview this week with the Permanent Representative of Cyprus to the EU, Kornelios Korneliou, discussing Cyprus’ priorities during the country’s Presidency of the EU, the economic crisis and Cyprus’ relations with Turkey.

The European Citizen writes on how to make a positive case for the EU, arguing that: “If the EU is to survive, it needs to be responsive to citizens, so participation needs to be at the heart of the pro-European argument.”

In a separate piece, The European Citizen also assesses Commission proposals for a European Terrorist Financial Tracking system. They write that a European framework may help to alleviate limitations of the current SWIFT agreement with the United States, which allows for the monitoring of financial transactions for anti-terrorism purposes.

The German Marshall Fund blog looks at the history of American proposals for a missile defence shield in Poland, especially now that President Bronislaw Komorowski has called for the creation of its own system, in light of American plans to scale down their system after the election of President Obama in 2008.

On Saturday A Fistful of Euros looks at five years of growing unemployment in Spain, saying that its recently heralded labour reforms have probably come too late. Despite Spain’s economic problems, however, Eva en Europa examines public support for the Euro in the country, finding somewhat surprisingly that just as many Spanish voters support the Euro now as they did before the crisis began.

Later in the week, Edward Hugh at A Fistful of Euros asks where the demand for Eurozone exports is going to come from given the global nature of the crisis: “What makes this crisis different from many of its predecessors is the global extension of the problem. If we were just talking about a few countries… the answer would not be that hard, reduce currency values and export like mad to the non-affected countries. But in the current crisis, almost all developed economies are affected to one degree or another.”

Meanwhile Open Europe wonders if broadsides from German politicians against further German involvement in the Euro crisis mean that there may be a summer of discontent in the country. Lost in Europe says that Germany is incompatible with the Euro, given that it has violated conditions of the monetary union, lagged on necessary structural reforms, bullied other Eurozone members and has violated the independence of the European Central Bank.

Alternatively, Olaf Storbeck at Economics Intelligence has an interview with Paul Sharma on the fallout from the Libor scandal and the effect of the crisis on the culture within the UK’s financial industry. He argues that in future the cost of doing business is likely to rise.

This week members of the Russian punk band Pussy Riot were found guilty on charges of ‘hooliganism’ during an anti-Putin demonstration. Dr Sean’s Diary draws comparisons from this case with the politically motivated trial of the band Plastic People of the Universe in communist Czechoslovakia in 1976. He wonders: “if and how the Pussy Riot trial will have the politically galvanising effect similar to that of the Plastics forty years ago”.

The Verfassungsblog looks at the distinction between the public, the private and religion in the recent decision of the Cologne District court to ban circumcision for religious reasons.

Elsewhere Open Europe says that Italy is now back to using the lira, at least for a rally for the Lega Nord party in Avio this coming weekend. As they note in a separate article, this may be more than a publicity exercise as Lega Nord have significantly stepped up their anti-Euro rhetoric since losing their place in the Italian government.

A Fistful of Euros illustrates the growing unemployment problem in Spain: 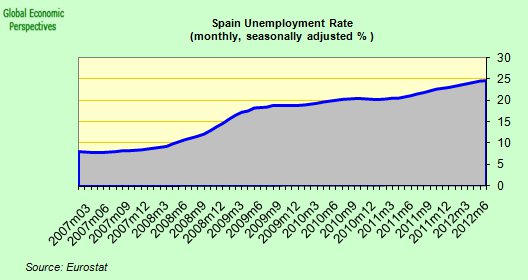 As the London 2012 Olympics drew to a close this week, The New Federalist blog looks at the relationship between the ideals of the Olympics and the ideals of the EU, and whether or not European medals should be counted alongside national ones.

On a completely different note, Craig Willy takes a lengthy look at the Euro-Gaullism of Jurgen Habermas.

Brussels blog round up for 25 – 31 August: Taking Draghi seriously, EU encouraging over-fishing in Africa, and is European identity in crisis?

Brussels blog round-up for 5 – 11 January: Czechs go to the polls, France’s changing foreign policy, and is Romania a democratic inspiration?