Brussels blog round up for 6 October – 12 October: Merkel in Greece, the Catalonia debate rages on, and EU wins the Nobel Peace Prize.

Reaction to the EU’s 2012 Nobel Peace Prize award has been mixed. Open Europe draws a comparison with the “once celebrated actor who just got a lifetime achievement award”, arguing that while European integration did play a significant role in ensuring peace after World War II, the EU’s recent record is less impressive. European Commissioner Cecilia Malmström is, perhaps unsurprisingly, more positive. She calls the award “most welcome, unexpected, and important”. 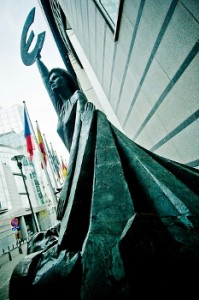 British MEP Mary Honeyball accuses UK Prime Minister David Cameron of being ‘dishonest on Europe’. She argues that the idea of the UK repatriating powers from the EU is unworkable as it relies on the consent of other EU Member States. Romanian MEP Corina Cretu is concerned at the UK’s plans to restrict the immigration of Romanian citizens despite the planned removal of their current movement restrictions at the end of next year, and would like the European Commission to intervene. Finally, Open Europe says that perhaps the UK should join the proposed European Banking Union after all.

According to The European Citizen, the EU Budget has an €10 billion hole, one which the European Commission is now attempting to plug by tabling a supplementary amending budget.

EU Logos at Blogactiv.eu looks at debates over Europe’s prison population of 650,000, saying that incarceration is certainly a means of punishment but not of rehabilitation.

Wyn Grant discusses this week’s joint statement by France and Germany on reform of the Common Agricultural Policy. The two countries have come to an agreement on the principle that there should be a nominal freeze in spending at 2013 levels (which will mean a fall in real terms). Meanwhile, Client Earth at Blogactiv.eu looks into whether or not the EU is on target for energy efficiency.

Cafe Babel wonders if Turkey is running out of patience in its bid to join the EU, saying that there is little chance that the country will join the EU before 2021.

Open Europe argues that the collapse of the proposed merger between aerospace and defence firms BAE Systems and EADS illustrates that national interests are still of paramount importance when it comes to defence issues.

Meanwhile, Hassan Mneimneh at the GMF blog draws a comparison between the situation in Syria and the case of Sudan. The problems in Darfur still remain unresolved almost a decade after the Sudanese government’s intervention in the region in 2003, which resulted in the deaths of around 300,000 people.

Peter Spiegel on the FT’s Brussels Blog assesses IMF chief Christine Lagarde’s statement that Greece should be given an extra two years to meet its budget targets. George Pagoulatos, writing for the European Council on Foreign Relations, also discusses Greece. He suggests a ‘positive – and plausible – way forward’ for the country, although notes that it will require a continuing commitment by Greece to the principles of European integration, “despite its current pain”.

This week also saw the German Chancellor, Angela Merkel, visit Greece. While Lost in EUrope covers the pre-visit tensions in Greece, and German Joys wonders who will cover the cost of the 7,000 police called in to protect the Chancellor,  Verfassungsblog uses the opportunity to muse on the EU’s potential status as an imperial power.

Revolting Europe looks at more protests in Spain following President Mariano Rajoy’s announcement of cuts of 9 per cent for government ministries next year, while Beyond the Transition reports that 20,000 health workers have demonstrated in Warsaw over worsening work conditions and the commercialisation of the health system.

The European Council on Foreign Relations says that twenty years after its foundation, the eurocrisis may now be threatening the Single Market.

The European Stability Mechanism (ESM) has recently come into effect, with a lending capacity of up to €500 billion to assist countries in financial difficulties. Lost in EUrope notes that the ESM now has a strong degree of German involvement.

This week Croatia celebrates its 21st birthday, with celebrations to commemorate its declaration of independence from Yugoslavia. Croatia, the War and the Future, says this occasion should be marked with ‘red poppies’ for the thousands of victims of the country’s war of independence.

Ahead of planned legislative elections in December, on her blog, Romanian MEP Monica Macovei has a rallying cry for her Democratic Peoples Party (PDL) to win the election.

While Debating Europe asks the question: Should Catalonia be independent?, Protesilaos Stavrou at Blogactiv.eu looks at the philosophical and economic questions around the Catalan independence issue, and Joseph V. Rodríguez Mora at Nada es Gratis assesses the economic impact of Catalonian independence. The analysis looks at how an independent Catalonia might trade with Spain, drawing a comparison with the close relationship between Spain and Portugal.

Ahead of elections in the Ukraine next month, Matiyeshyn on Europe at Blogactiv.eu looks at the two main electoral camps, something he says artificially limits the choices of Ukranians. Polish MEP Marek Siwiec reports on observations made in the city of Dnipropetrovsk, claiming there have already been several examples of laws being violated during campaigning. Meanwhile, Anatoliy Martsynovski looks at Ukrainian polling data on the country’s view on potential EU membership. Citizens are split with 44 per cent in favour of joining, while 38 per cent are against.

The OFCE blog looks at how France can improve its trade balance, saying that one of the better solution is to make the country more competitive and raise the productivity of its workers. Still on France, French and EU, at Blogactiv.eu says that the recent killings in Strasbourg have once again brought race and immigration to the top of the political agenda.

This week, A Fistful of Euros looks at the IMF’s Global Financial Stability Report, which has reported on levels of borrowing from Central Banks (Including the European Central Bank):

Writing for (y)EU spent a day in the European Parliament.

Open Europe wonders if we have seen the last of Silvio Berlusconi in Italy.