Spain is navigating through stormy economic waters, but the time for further structural reform has come.

Spain is navigating through stormy economic waters, but the time for further structural reform has come.

Spain’s ten year bond yields have soared to over 7 per cent in recent months, and its banks have been bailed out by European partners. But, as Manuel Muniz and Alexandre Pérez argue, there are reasons to be hopeful about the Spanish economy. Productivity has improved, exports are climbing and debt levels are not as alarming as some figures suggest. For Spain’s recovery to begin its Eurozone partners need to clarify the recapitalisation of the country’s banks and the government must reform labour markets and education systems to reduce the now chronic levels of unemployment.

Spain has now been in recession for almost five years, and has had to face challenges and tackle each of them in very different ways. In the beginning, the concern with national public spending, led to severe budget cuts in 2011 and 2012. Later, the need to reform the labour market emerged in order make it more flexible and competitive, prompting a general strike in March of this year. A few months ago doubts about the health of the Spanish financial system surfaced. Would Spain be capable of recapitalising its banks without putting its overall solvency at risk? European partners stepped in and structured a bailout of Spanish banks that attempted to de-couple financial and sovereign risk. Today we read in the press that the true problems in Spain are the uncontrolled spending of its “autonomous regions” like Valencia or Catalonia, unsustainable levels of private debt, which could impose significant pressure toward deleveraging over the coming years, and the structural lack of competitiveness of an economy that lacks the ability to devaluate its own currency. All the while Spain has struggled to keep its costs of financing under control. As we write, the spread of Spanish bonds compared to Germany’s is around 500 basis points, meaning that 10-year financing is costing Spain almost 7 per cent.

So what are we to make of it all? What are the true underlying problems of the Spanish economy and, above all, what are the possible solutions to some of them?

Let us begin by pointing out that not all is gloom in Spain. For example, Spain’s lack of productivity has been drastically reduced in the past three years, and it has recovered more than half of the competitiveness it lost during the first decade since the introduction of the euro. This has been the result of two factors. First, salary containment has led to almost no wage rises over the last 2 years, as opposed to Europe’s average annual increase of 3.7 per cent. Second, large numbers of less productive, and mostly temporary, workers have been laid off leading to a steep increase in the average output per unit of labour.  Productivity has indeed risen sharply (see Figure 1 below), measured not only as GDP per worker (11 per cent since the onset of the crisis, the highest of any of the euro zone countries), but also in terms of GDP per hour worked (8 per cent since 2008). As a result, the real effective exchange rate of Spain has depreciated by around 7 per cent since 2008, in contrast to an appreciation of 1 per cent in Germany – an improvement achieved despite Spain’s inability to devaluate its own currency. 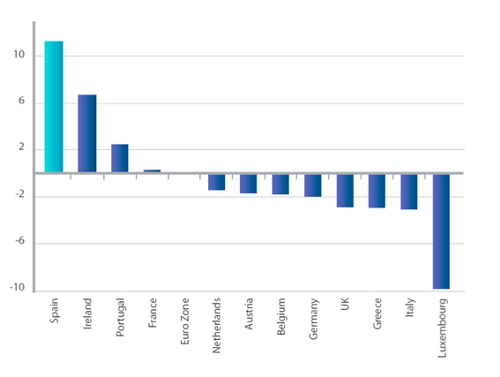 Gains in competitiveness are helping to replace falling domestic demand via an increase in exports. Exports of Spanish goods have climbed €55 billion since 2009, a rise equal to a staggering 5.1 per cent of GDP. As a result, during the first months of 2012 exports of goods and services reached the highest level in recorded history. Furthermore Spain has been one of the most successful OECD countries in maintaining its share of world exports despite competition from emerging markets (see Figure 2 below).

In terms of public debt one should not forget that Spain’s situation is not significantly worse than that of other Eurozone members (69.3 per cent of public debt to GDP in 2011 in Spain, vs. 82 per cent in Germany, 86.5 per cent in France, 85.7 per cent in the UK, and 120.9 per cent in Italy). Moreover, even under a very stressed scenario – in which Spain is forced to finance the €200-220 billion it needs from today until early 2014 at yields of 8-9 per cent – the effect on the average interest rate of the total outstanding debt would be limited, rising from the current 4.1 per cent to about 5 per cent. Of course, this would have a negative impact on the budget, but the situation would be far from ‘losing market access’.

On the issue of Spain’s regions one has to remember that the central government has a great deal of power regarding spending. With the exceptions of Navarre and the Basque Country, all the “autonomous regions” receive most of their income from the central government, granting it full ability – legally and politically – to limit the transfers as required. Concerns about the old stock of regional debt should also be put in perspective. First, it amounts to a manageable 13 per cent of GDP (2011) and, moreover, it has been fully accounted for in the reported figures of total national debt. This means that the recent discussions about the required funds to help some of the most indebted regions to refinance their “old debt” are not so relevant from the point of view of total national public indebtedness.

Private debt levels in Spain are, on the other hand, not as alarming as some figures might suggest. It is true that Spanish corporations hold significant amounts of debt, but it is also the case that they are markedly internationalised and possess valuable assets abroad. Indeed, the total value of the private sector assets abroad (113 per cent of GDP) exceeds their gross external debt (97 per cent). Households, in turn, have today levels of financial burden in line with those observed in other European countries (25 per cent of disposable income in Spain, versus 28 per cent in France and 24 per cent in Germany).

So why then are markets concerned with the situation in Spain? Why is Spain facing such high costs for basic financing? And why is there a constant talk of the need for Spain to request a full bailout from Eurozone partners?

First of all, the Spanish government has been struggling to produce a communication strategy able to regain trust from investors. Indeed, some of the achievements of the Spanish economy have not yet attracted significant attention by the media and investors. As a result, the market is still mispricing the potential of the Spanish economy. Improper public to private communication might seem trivial in an environment as open as bond markets but the truth is that private actors are poorly informed and, in more cases than expected, react to media reports rather than information from the Spanish government or other official sources.

Second, it is clear from how the markets are behaving that the Eurozone partners need to finalise all details regarding the recapitalisation of Spain’s troubled financial institutions as soon as possible. The deal to move towards banking union, agreed during the European Summit at the end of June, was a significant step; but after so many false starts, it is only reasonable for investors to wait for proof that the plan will be fully implemented. It is still unclear, for example, how liable Spain will be if some of its banks cannot return the resources lent to them by the ESFS or the ESM before the banking union is fully implemented. It needs to be made perfectly clear that the Spanish state will not be liable in those cases or pressure on Spanish bonds will remain (see Figure 3 below). 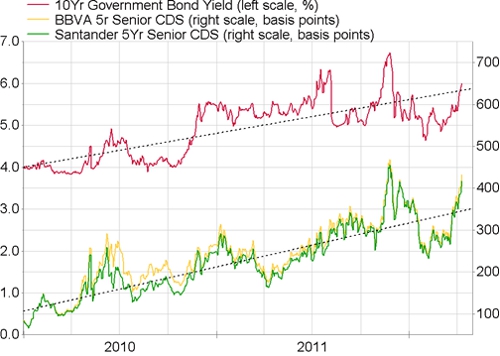 Finally, Spain faces a significant medium to long term challenge regarding the re-incorporation of millions of workers to its labour market while at the same time keeping productivity high. As indicated before, some of the competitiveness gains we have witnessed in the past months were generated by the laying off of millions of workers (see figure 4 below). High levels of unemployment have in turn generated an increase in public spending, mostly due to the kicking in of automatic stabilisers like unemployment benefits. If Spain is ever going to reduce both cyclical and structural unemployment in a sustainable fashion and bring its public finances back to health it needs to generate highly productive jobs and the necessary human capital to serve them.

Figure 4 – Unemployment and the Output Gap in Spain 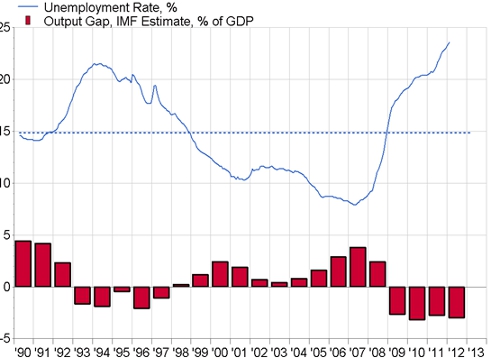 In order for Spain to achieve such objectives it will need to first of all reform its secondary and tertiary education systems, which are struggling to produce the talent needed to feed an increasingly globalised export-driven private sector. Also, despite the significant progress of recent labour reforms, further efforts are needed in order to increase the flexibility of the labour market and to bring down Spain’s staggeringly high structural unemployment. Furthermore, it might well be time for a reviewed public investment strategy targeting highly value-added sectors of the economy, where Spain can be most competitive in the future. Reforms such as these will take years to produce results but are the only true solution to drive long-term growth.

Overall, Spain’s economy is reacting to the crisis with reasonable agility. If the measures adopted by the Spanish government are accompanied by a satisfactory clarification of the roadmap towards a European banking union, Spain should be capable of navigating the following months without further financial help. If the Spanish government is granted that time it should invest it wisely in forwarding much needed structural reforms.

However, if unclear statements from European leaders regarding the future of the monetary union are combined with a lack of discussion about long-term growth and sustainability, we fear Spain will move ever closer to a full bailout and to additional front-loaded austerity. That Spain has reduced its public spending, carried out relevant reforms, and committed to shrinking its inefficient public administration is surely good news. However, it is high time Eurozone partners made their support for further integration explicit and Spain focused on the true important challenge it faces: the reform of its economic model in order to allow for sustainable long-term growth.

Manuel Muniz – University of Oxford
Manuel Muniz is a lawyer and DPhil student in International Relations at Oxford. He also holds a Masters in Public Administration from Harvard University (@Manutemuniz)

The costs of the UK’s opt-out of EU justice and policing measures would far exceed any benefits.