Poland has recorded impressive growth figures since the beginning of the global financial crisis. Witold M.Orłowski assesses the factors behind the country’s economic success, noting that the internal strength of the economy and its relatively low exposure to troubled southern European states have provided key advantages. The main long-term threat stems from the country’s future participation in the euro.  If Poland remains outside of the eurozone it risks marginalisation within the EU, but joining the single currency could undermine some of the factors that have so far assisted the country’s economic performance.

Poland’s economic performance in the past five years has been nothing short of amazing. While the rest of Europe went through a painful recession, followed by a weak and unstable recovery, Poland enjoyed continuous growth, ranging from 1.6 per cent at the epicentre of the crisis in 2009, to 4 per cent in 2010-11 (as shown in Figure 1 below), once the worst wave of the global financial turmoil had passed. Over a five-year period the country managed to increase its GDP by almost 19 per cent, while the EU’s GDP as a whole struggled to return to pre-crisis levels. As a result, the nation has improved its position within Europe, raising its GDP per capita from 54 per cent of the EU average in 2007, to 65 per cent in 2011, and probably to 66-67 per cent in 2012. Moreover, to the surprise of its own citizens, the country has demonstrated unexpectedly high progress in organisational skills, building an extensive network of new highways and adequately handling preparations for the Euro 2012 football championship. 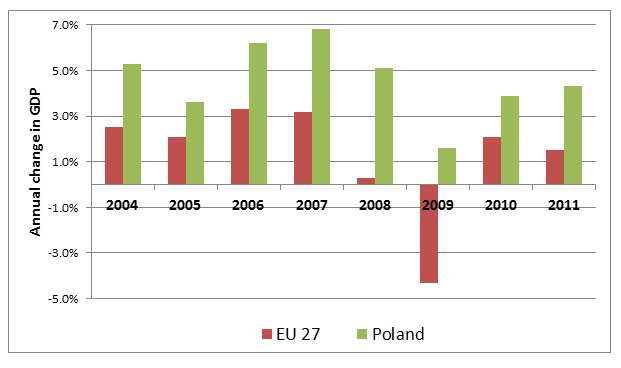 This success partly reflects the internal strength of the economy, and partly the impact of several external factors which helped Poland to deal with the global crisis. The list of internal strengths is quite extensive. First, the country is still benefiting from its attractiveness to foreign investors and the fundamental competitive advantage it enjoys within the EU as a production site. Although levels of foreign direct investment fell significantly during the crisis, lower labour costs and higher labour market flexibility helped to maintain growth in industrial output and exports. Second, growth has been supported by the fact that Poland – to a large degree by coincidence – did not join the Eurozone prior to the crisis and therefore has a more flexible exchange rate regime. The long-term weakening of the złoty led to an important shift from imported to domestic goods and helped protect jobs in export industries.

Third, a key advantage within the country is the relatively low level of debt among households and firms, leading to a high degree of financial stability and a strong portfolio of banking assets. Finally, compared to its Central and East European neighbours, Poland has a relatively big and developing internal market that proved quite resilient to the economic slowdown. In short, Poland has a flexible, entrepreneurial and healthy economy that went through a profound restructuring before the outbreak of the global crisis. Every Polish entrepreneur confirms that, compared with the purgatory of the economic transition period between 1990 and 2007, the current economic troubles look much more moderate.

As far as the external factors are concerned, the key advantage was the continuous inflow of EU structural funds that allowed for the continuation of big infrastructure development projects. The geographical distribution of the Eurozone debt problem also helps. Fortunately for Poland, the crisis is mainly hurting Mediterranean countries, with relatively weak economic links to Poland (except for Italy), while the key German market continues to grow.

The unpleasant effects of the global crisis came from the fiscal side. A combination of tax cuts and high public investment, only partly financed by the inflow of EU structural funds, helped in supporting domestic demand and maintaining a respectable GDP growth rate. However, this policy has led to an increase in public debt from 45 per cent to 55 per cent of GDP. Although this debt level still remains acceptable by West European standards, high deficits are unsustainable in the longer run. The excessive level of deficits may lead to Poland’s credit rating being cut and higher debt servicing costs. Moreover, the government has already pledged to the EU that it will reduce the public sector deficit to 3 per cent of GDP by 2012. As a result, a significant fiscal consolidation programme started this year, coinciding with the first effects of the approaching Eurozone recession and contributing to the major economic slowdown.

Unfortunately, the biggest challenges may still lie ahead. As the Eurozone crisis continues, the dangers of a much deeper recession and major financial turmoil remain high. If this occurs, the economic slowdown in Poland may be deeper and longer than expected, fully extending to the first half of 2013. Moreover, as the country has considerably high exposure to foreign financing, the market turmoil is likely to lead to a significant weakening of the złoty, with possible negative effects for the banking sector and for the fiscal situation. In the most extreme case, one may even expect a temporary lack of access to international capital markets for Polish banks and the government.

It can be argued, however, that Poland is well prepared to deal with these problems. The central bank reserves are sufficiently high, and the flexible exchange rate regime may help in coping with weak exports. The banking sector has already proven to be quite resistant to exchange rate shocks. The fiscal position of the government, albeit far from ideal, seems to be sustainable in the medium term if only a reasonable effort is made to curb expenditures.

The biggest long-term risk stems not from finance and economics, but from politics. As Poland stays outside the Eurozone, the country enjoys a lot of freedom in shaping its fiscal and monetary policy to counteract the recessionary impact. There is, however, a price to be paid. The prospects of deeper economic and financial integration within the Eurozone, leaving Poland as a second-class EU member with decreasing influence on the bloc’s policy and future budget, is an easily imaginable scenario. But the real nightmare, albeit still not plausible, is the potential disintegration of Europe, stripping Poland of the benefits of its EU membership. Joining the Eurozone looks feasible in the medium term from an economic point of view, but can be extremely difficult given the internal politics within the country and the nation’s obvious lack of enthusiasm for the euro. Staying outside, on the other hand, increases the risk of marginalisation. But, for the time being, the government does not seem to have any other option but to prepare ostentatiously for their accession, and to support the plans for Eurozone reforms, with the possibility of voluntary participation in some Eurozone policies.

The crisis in Cyprus not only threatens the Cypriot economy, but might also undermine the country’s relations with key partners and allies.

The consequences of a Euro collapse for both the Eurozone’s core and periphery are so dramatic, and their ramifications so uncertain, that all efforts should be made to shore up the European Monetary Union.