One of the main arguments against increased immigration is that it puts pressure on public services, by ‘crowding out’ other parts of the population. Using evidence from Germany and the UK, Jonathan Wadsworth investigates immigrants’ use of health services, finding that while there may be some difference in health outcomes, immigrants do not use health services substantially more than the native-born population.

The UK and Germany have experienced significant increases in their populations recently, driven, in the main, by increased immigration. While rising immigration is often accompanied by concerns over its net benefits, the determination of such a calculation is complex, involving the compilation of evidence on the resulting costs or advantages from many different sectors of the economy. In an effort to shed some light on these issues, we have used data that looks at individuals’ use of health services over time in both Germany and the UK to try to examine whether immigrants differ in their intensive or extensive use of health services from native born individuals, as captured by both the incidence of and number of visits to general practitioners and hospitals. Our evidence suggests that the relative net cost of immigrants to health services may be broadly in line with that of the rest of the population.

While the debate over the net fiscal contribution of immigrants is ongoing, most existing studies of welfare and public service use by immigrants do not extend to the study of one of the largest public services available to residents of the UK and Germany: state-provided national health systems. Indeed certain sections of the media have put forward the idea that increased immigration has put additional pressure on health and services. Clearly if the net gain from immigration is to be evaluated, knowledge about the relative use of public services, including health services, by immigrants is an important factor in that calculation.

Faced with a rising population, it may be that tax revenues would simply increase in line with the change in population, allowing continued provision of a given level of state-funded health resources. However if health budgets are sticky, or the composition of the population and hence demand for health services changes as a result of immigration, then there may be crowding externalities resulting from any increase in population competing for a quasi-fixed resource.

There is a general consensus in the academic literature that immigrants will be “positively selected” in terms of self-reported health. Healthier immigrants will have more to gain from migration, may be the recipients of higher incomes or may be less likely to return to the origin country. New arrivals to a country are also typically found to be healthier than the native-born population, on average, but the health of migrants who remain tends to converge toward that of the native population over time. Year of entry cohort composition or selective return migration are often advanced as reasons for these observations.

In some ways however, the issues of selectivity and the existence or otherwise of health gradients related to duration of residence do not directly address the question of whether immigrants, who remain in the host country, put differential pressure on health services than the native-born population, though they may of course help to explain why any result may arise. Similarly the possibility of discrimination in health care provision, differences across individuals in the willingness or ability to access health services, or other characteristics both observed and unobserved, known to be correlated with health, could all underlie any differences in outcomes between immigrants and the native-born.

Ultimately, the cost-benefit analysis of migration depends on whether, not how, immigrants make differential use of health services. We have estimates of the relative use immigrants make of the health services in Britain and in Germany: both unconditional differences and conditional on a set of socio-demographic characteristics. The former should help address the general macroeconomic question of the net cost of immigration on health services. The latter can help the understanding of the main drivers of the macroeconomic results.

The evidence is discussed at length in our LSE CEP Discussion Paper but the results can largely be summarised by Figure 1 and Figure 2 below. Over the sample period, there are no large differences in health service use between immigrants, on average, and the native-born populations of the British and German samples. Controls for differences in characteristics between immigrants and native-born sample populations make little difference to these broad findings.

Figure 1- Number of Visits to Doctor by Age and Nationality 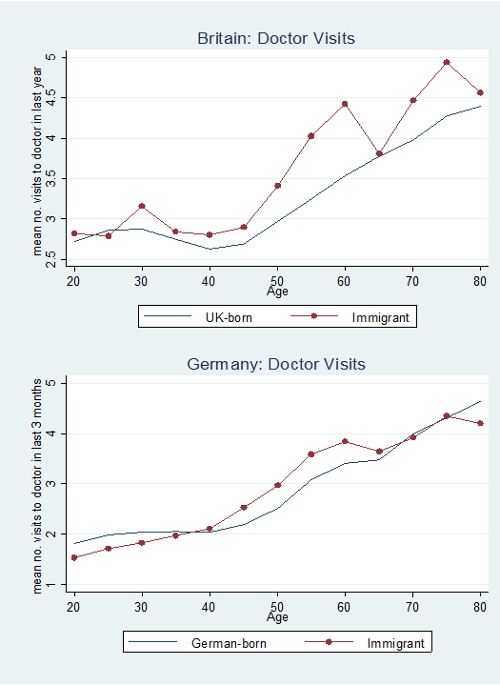 Figure 2- Number of Visits to Hospital by Age and Nationality 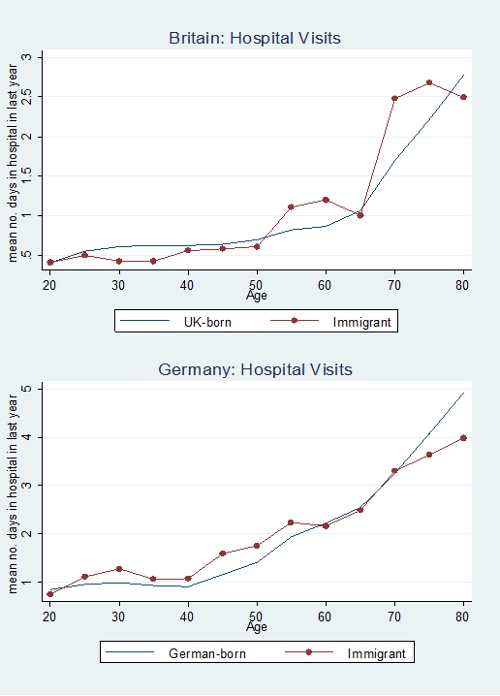 While immigrants to Germany, unlike immigrants to the UK, do appear to report a greater tendency to be in poor health than the native-born population, this does not appear to lead to a greater propensity to use the health services on offer. Moreover, unlike for self-reported health, there is less evidence of any systematic assimilation profiles over time in immigrant use of health services in both countries. For Britain immigrants are no more likely to be in poor health, make a little more use of GP health services (0.3 of a visit more in a year) but do not use hospitals any more or less than the native-born population.

These GP effects for Britain are confined to the sub-set of immigrants who arrived as adults and there may be some, though not systematic, differences in usage across different year of entry cohorts. Immigrants to Germany may be more likely to self-report poor health but there is no evidence of greater manifestation of health service use. Indeed if anything immigrants to Germany are less likely to use GP services, despite, on average, worse self-reported health. However these differences are again not large.

Rising immigration may not have placed undue pressure on the health services of these countries over the period investigated, meaning that on this evidence, the contribution of health service demands to the debate over the net fiscal benefit of immigration looks to be rather neutral.

An extended version of this article can be found here.