Dimitris Rapidis bids farewell to Jean-Claude Juncker who is soon retiring as the head of the Eurogroup (the meeting of the Eurozone’s finance ministers), saying that he is an emblematic EU figure. Meanwhile, Eurdemocracy at Blogactiv.eu accuses the European Commission of ‘debasing’ the euro since 2002.

Lost in EUrope says that the European Commission has carried out a ‘coup’ by announcing a project to collect passenger data without the consent of the European Parliament.

Lost in EUrope wonders why there are no documents or photos of a meeting between EU Commission President Barroso and French President Hollande concerning France’s military action in Mali. For Charlemagne, the question now is: for how long are the French prepared to intervene?

The European Council on Foreign Relations’ blog accuses the EU of being ‘asleep at the wheel’ over Mali, saying that France must now be joined by a concerted European security effort. Meanwhile the GMF blog argues that the situation in Mali, and the hostage crisis in Algeria, exposes Europe’s security shortcomings.

On a different topic, the European Council on Foreign Relations’ blog looks at the difficulty in assessing the EU’s sanction regimes of recent years.

This week, Open Europe warns European Central Bank President, Mario Draghi, not to get ahead of himself, with his recent comments that the eurozone was returning to a normal financial situation. Meanwhile, Lost in EUrope wonders if Germany is already in the midst of recession, and the FT’s Brussels blog looks at the continuing uncertainty about whether Ireland will be able to emerge from its bailout when its funding ends in November.

Jonathan Portes at Not the Treasury View takes an in-depth look at a recent report by the European Commission, “Employment and Social Developments in Europe 2012”. He highlights six key points from the report that are of crucial importance for Europe’s economies.

The GMF blog looks at the difference between philanthropic culture in the USA and Europe, and argues that in the face of austerity, Europe has much to learn from its transatlantic neighbours.

This week was due to see the UK Prime Minister, David Cameron, make his widely anticipated speech on the country’s relationship with Europe, but it was postponed on Thursday due to the ongoing hostage crisis in Algeria. Prior to its cancellation, the European Citizen said that it would not please anyone on either side of the debate.

Europe mon beau souci uses Russia’s gift of a passport to Gerard Depardieu as a starting point to look at the rise of ‘show’ passports in other European countries such as Hungary.

Croatia, the war and the future looks at a row between the Croatian government and the Catholic Church over sex education in Croatian schools.

Chris Dillow at Stumbling and Mumbling writes broadly on the concept of incentives as a motivation for innovation. A general assumption is that financial incentives (such as bonuses) provide motivation for individuals to increase productivity and find new solutions to existing problems. However recent research has called this idea into question.Image of the week

This week, Contentious Politics Russia looked at the art of politics in today’s Russia: 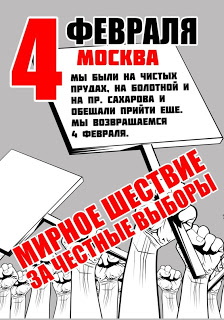 What has President of the European Council, Herman van Rompuy been up to? This week he visited Egypt, Tunisia, met with the Prime Minister of Finland, Jyrki Katainen,

Jon Worth is frustrated with border checks in Denmark (which should not occur under the Schengen Agreement).

Brussels blog round up 11 – 17 January: EU reform, voting rights, and is the PP-PSOE era nearing its end in Spain?

Brussels blog round up for 3-9 March 2012: The European Commission discovers social networks, Greece survives in the Euro. And will Merkel get a majority?