There is growing concern in France that Muslim immigrants from North Africa are poorly integrated into French society, often due to discrimination. But are they discriminated against because of their religion, or because of their national or ethnic origins? Claire Adida, David Laitin and Marie-Anne Valfort address this very issue, and find that Muslims face significantly higher levels of discrimination from rooted French (defined as French nationals with four grandparents born in metropolitan France) than do their Christian counterparts, and that the dynamics leading to such discrimination are likely to endure.

According to an IFOP survey conducted in October 2012 for the French magazine Le Figaro, 67 per cent of the French population believes that people of Muslim descent are poorly integrated into French society. This survey echoes several studies that have found evidence of discrimination against Muslim immigrants from the Maghreb (North Africa). But what, exactly, do these results highlight: Maghrebi-based or Muslim-based discrimination?

Since 2009, we have conducted research aimed at investigating the integration of Muslims in France. In Western Europe, France is home to the largest proportion of Muslims, or 7.5 per cent in 2010. Our goal was to answer the following questions: are Muslims discriminated as Muslims (rather than as Arabs or Maghrebis) in the French labour market? If so, what is the nature of such discrimination and what sustains it? We investigated these questions by focusing on a group of immigrants from two ethnolinguistic groups in Senegal, the Joolas and the Serers. These groups are divided by religion, with one portion of them being Muslim and another Christian. With the exception of religion, these Senegalese Muslims and Senegalese Christians are similar. They share the same culture and migrated to France in the same era (during the early 1970s) and with the same economic motivations. This sample therefore allows us to isolate the religious effect from national, ethnic and racial factors.

Are Muslims discriminated on the French labour market? 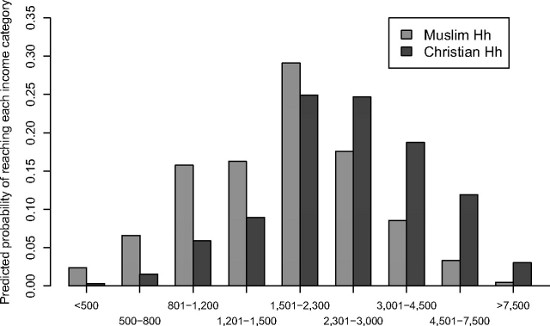 What is the nature of such discrimination?

Results indicate that the Senegalese Muslim and rooted French participants are stuck in an unfortunate cycle of behavior, in which (i) the rooted French harbor a taste for discrimination against those individuals they can identify as Muslims, and (ii) Senegalese Muslims, anticipating such discrimination, withdraw from their host community, thus strengthening their identification as Muslims by the French participants.

However, a form of statistical discrimination may take place in the context of the French labour market. Here, HR personnel are better informed about the average characteristics of candidates from various communities. They are therefore more likely to discriminate against Muslim applicants because they expect them to assimilate less and thus to have deleterious effects on the esprit-de-corps of the company. This form of statistical discrimination reinforces the outcome that we have identified in our research, that Muslim immigrants and rooted French are stuck in a self-sustaining vicious circle of attitudes.

The recognition of this discriminatory circle gives us clues as to why the current situation is so difficult to overturn – no party has an incentive to change its behavior. But to simultaneously induce a change in Senegalese Muslims’ expectations of discrimination by rooted French (and therefore encourage greater levels of assimilation) and a change in rooted French reactions to Muslim signals – such as first names – is a fundamental challenge to equality in our time.

This article is a shortened version of the IZA paper Muslims in France: Identifying a Discriminatory Equilibrium.

Professor David Laitin will also be speaking at the LSE on 28 February on this topic. More information and event listing.

Claire L. Adida – University of California, San Diego
Claire Adida is an Assistant Professor in the department of Political Science at the University of California, San Diego. Her research is in Comparative Politics, and more specifically in the study of ethnicity and identity, government and non-state provision of public goods, inter-group cooperation and violence, and trust and informal institutions.

David D. Laitin – Stanford University
David D. Laitin is the James T. Watkins IV and Elise V. Watkins Professor of Political Science at Stanford University. Before his research project on Islam in France, he conducted field research in Somalia, Yorubaland (Nigeria), Catalonia (Spain) and Estonia, focusing on issues of language and religion, and how these cultural phenomena link nation to state. His books include Politics, Language and Thought: The Somali Experience, Hegemony and Culture: Politics and Religious Change among the Yoruba , Language Repertoires and State Construction in Africa , Identity in Formation: The Russian-Speaking Populations in the Near Abroad , and Nations, States and Violence.-