Bavaria is due to hold a referendum on the abolition of university tuition fees, following a successful petition last month. As Malte Huebner writes, Bavaria is one of only two German states to use tuition fees as a funding mechanism, with the other – Lower Saxony – also expected to abolish the practice later this year. He argues that while German universities do face a genuine funding shortage, the rejection of tuition fees throughout the country is likely to leave financial contributions from the federal government as the only alternative.

In January, a petition by citizens in Bavaria successfully reached the threshold required to force a referendum on the abolition of university tuition fees. The referendum will be held unless the Bavarian parliament chooses to scrap the fees within the next three months. With public opinion strongly in favour of ending the practice, the short era during which tuition fees were levied in several German states is likely to come to an end. Even though early empirical studies have only identified a modest impact on student enrollment, tuition fees might soon become a thing of the past. State governments will therefore have to rely on federal funds to finance their universities once Germany’s ‘debt brake’ begins to constrain their expenditure.

Tuition fees only began in 2005 in Germany, when the constitutional court ruled that federal legislation preventing state governments from charging them interfered with the rights of the German states to determine their education policies autonomously. Soon after this decision had been made, seven out of the sixteen German states began collecting tuition fees. In these states students had to pay an annual fee of about 1,000 euros from 2006 or 2007 onwards. The decision to introduce fees was made strictly along party-lines. All states being ruled by a coalition of the centre-right Christian Democratic Union (CDU) and the liberal Free Democratic Party (FDP) decided to introduce fees, while all other state governments abstained from this possibility. When governments in the fee states were replaced by coalitions under participation of the Greens or the Social Democratic Party (SPD), tuition fees were soon abolished. Currently, Lower-Saxony and Bavaria therefore remain the only states in which students have to pay for higher education. However, in Lower-Saxony the newly elected red-green (SPD-Green) government is already planning to end the collection of fees and with the referendum in Bavaria likely to lead to a similar outcome, tuition fees in Germany may have become a thing of the past by the end of this year. 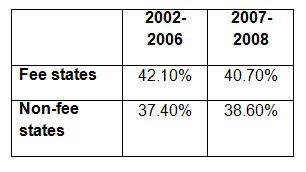 Proponents of tuition fees in Germany often argued that the introduction of tuition fees would foster competition between universities. This argument is, however, not entirely convincing. The same effect would have already been achieved by granting universities greater autonomy in choosing their students. Neither can fiscal constrains explain the introduction of tuition fees. While some of the states which introduced fees, notably the Saarland, North Rhine-Westphalia and Hessen, were running sizeable budget deficits, other fee states, such as Bavaria and Baden-Wurttemberg have on average reported fiscal surpluses. Moreover, with tuition levels not exceeding 1,000 euros per annum, revenue from tuition fees only constitutes a small fraction of state revenue. In fact, it might have been the relatively low level of the fee that made it easy for newly elected state governments to give in to public opposition against tuition fees.

This does not mean that Germany’s universities might not face a funding problem in the near future. Even though state finances did not yet require the introduction of tuition fees, Germany’s ‘debt brake’, which has been enshrined in the constitution in 2009, will severely constrain state finances in the future. At the same time, an ageing population will cause rising expenditure on pensions for former state employees. On the revenue side, a number of special transfers from the federal government, which have so far helped the East-German states to finance investment in infrastructure, are set to expire in 2019. According to calculations of the German Council of Economic Experts, these developments require most state governments to cut expenditure by between 10 per cent and 20 per cent before 2020. At the same time, the number of newly enrolled students is projected to remain well above the level reached in 2007 for some time. If annual expenditure per student is to be kept constant, Germany’s universities will need an additional source of funding. As Germany’s recent tuition fee experiment has shown, increasing private contributions does not seem to be an option. This leaves the federal government as the only ‘spender of last resort’. Last year the federal government initiated a change of the constitution, which would allow it to help states to finance higher education institutions. It appears that this is likely to be the way forward in solving the funding problem at German universities.