Parliamentary elections are due to be held in Italy on 24-25 February. As part of EUROPP’s series previewing the election, Chris Hanretty predicts the final results by pooling the most recent polling data. His findings indicate that the centre-left coalition, led by Pier Luigi Bersani of the Partito Democratico (PD), is almost certain to win a majority in the Chamber of Deputies. However they are very unlikely to gain a majority in the Senate, falling just ten seats short.

With the publication of polls now banned in the run up to the Italian general election of the 24th and 25th February, we’ll never have a better opportunity to examine party support, and how that translates into seats. Over the past four weeks, I’ve collected information from 180 different polls asking about vote intention nation-wide and in the different regions used to allocate seats in the upper chamber, the Senate. Through pooling these polls using Bayesian methods (similar to the methods used by Rob Ford and others for the UK, and originally by Simon Jackman), and through estimating the link between national support and support in each of the regions, I’ve been able to generate a forecast for the distribution of seats in both chambers.

There are two clear conclusions from this forecast. The first is that the centre-left is almost certain to be the largest coalition by vote share in the Camera (Chamber of Deputies). Under the Italian electoral system, that means that it picks up a guaranteed majority of 340 seats, or 55 per cent of the seats available.

The second conclusion is that the centre-left has a vanishingly small probability (around 5 per cent) of winning a majority in the Senate. It is likely to be the second largest coalition in the key regions of Lombardy and the Veneto. That means that instead the centre-right picks up the winner’s bonus for those regions, leaving the centre-left a handful of seats short of a majority. Figure 1 shows the predicted Senate seats for each of the main parties (based on the median value of projections).

Figure 1: Predicted Seats by Party in the 2013 Italian Senate Elections 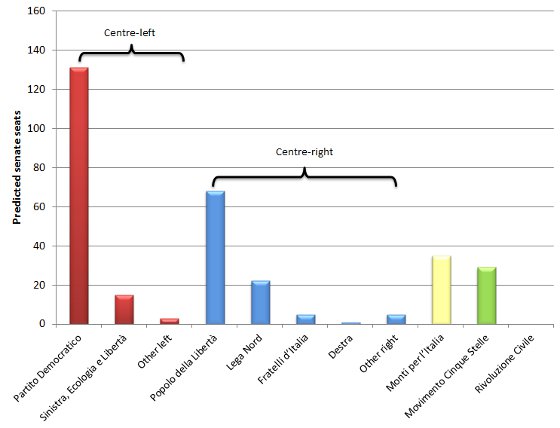 The fault lies not with the incredible policy promises made by Berlusconi (whose party has nevertheless recouped around four percentage points since mid-December), but with the electoral system. There were many objectives behind the 2005 reform of the electoral system (objectives which I’ve discussed in a paper together with Alan Renwick and David Hine), but one objective was to create incentives for clear alternation between competing left and right wing majorities. The winner’s bonus in the Camera — which gives the largest coalition or largest single party a top-up to 340 seats — was introduced with this objective in mind. A similar bonus is also found in Greece. This is a very inelegant form of institutional engineering, but at least the link between objective and means is clear.

The same can’t be said for the winner’s bonuses in the Senate. Because the Italian constitution specifies that the Senate must be elected on a regional basis, the bonuses are not applied nationally, but rather in a series of different regional contests. Because party support is not uniformly distributed across the country, that means that the party which loses the popular vote is very likely to recoup a substantial haul of seats in at least one Senate region. The Senate makes a majoritarian mechanism into a counter-majoritarian check. It’s a minor miracle that the system hasn’t delivered a split outcome in the two previous elections in which it’s been used.

There’s no use crying over spilt milk — or in this case, misallocated regional premia. What is the most likely outcome for government if the distribution of seats is as I predict? It is fair to say that the most widely rumoured post-electoral coalition is not, in fact, a coalition between the members of the centre-left electoral coalition, but a coalition between the Partito Democratico (PD) and Mario Monti: with PD leader Pier Luigi Bersani as Prime Minister and Monti as Finance minister. This scenario would be far from ideal in a number of ways.

First, this would resurrect a traditional vice of the First Italian Republic: governments chosen not by voters presented with a clear choice between opposing teams, but by politicians engaged in post-electoral coalition formation. This vice was thought to have been eliminated by the electoral reforms of 1992 and that of 2005. If the government that formed were not chosen by the voters, and included a large centrist element, it would mean that the reform of 2005 had failed to achieve any of its intended goals.

Second, such a coalition would also depend on an unusual degree of unity from all parties in the coalition. Centrist members of the coalition in particular would face considerable pressure, or considerable inducements, to defect to the opposition. This, indeed, was precisely what happened during the short-lived second Romano Prodi government of 2006 to 2008.

It is therefore difficult to look at the seat shares shown in figure 1 and envisage the parliament elected in 2013 lasting until 2018. Premature elections seem likely. Whether they take place six months after the polls, in the hope that fresh autumn elections can provide clarity where spring elections failed, or instead take place two years after the polls, following the dissolution of a fractious centre/centre-left coalition, is not yet clear.

A more detailed discussion of the results is available at: “The 2013 Italian election: a poll-based forecast”

Chris Hanretty – University of East Anglia
Chris Hanretty is a Lecturer in Politics at the University of East Anglia. His research interests include institutional design, in particular the design of non-majoritarian institutions like regulators and broadcasters. He is also interested in judicial behaviour, and in particular the patterns of dissent on new constitutional courts in Central and Eastern Europe. His most recent book is, Public Broadcasting and Political Interference (Routledge, 2011).

The re-election of Giorgio Napolitano as Italian President merely represents the ‘calm before the storm’ in Italy’s political system.