Last week, the European Council agreed to a deal that would reduce the European budget in real terms for the first time (Open Europe has a good budget breakdown). On her blog, Neelie Kroes, Vice-President of the European Commission says that the budget is one for European growth, but Romanian MEP Corina Cretu believes that the budget’s cuts to education, research and infrastructure show that it ignores the priorities of Europe’s citizens. Au Cafe de L’Europe warns that the European Parliament is likely to try and renegotiate the budget when it comes before the body in a few weeks. PolsciEU says that the current budget debate sounds very much like traditional democratic politics, despite some commentators criticisms.

On Tuesday, French President Francois Hollande gave a pro-federalist speech to the European Parliament on the EU. Au Cafe de L’Europe says that Hollande’s ‘euro-romantic’ strategy is to counterbalance the more sceptical UK and Germany (or the Anglo-German axis according to Open Europe).

Looking at the horsemeat scandal, Europe mon beau souci says that the case shows the need for more EU cooperation and oversight in the area of food standards and safety, while Debating Europe wonders if tougher rules would have actually prevented the scandal. Meanwhile Coulisses de Bruxelles tries to find if there is any truth in the assertion that the surplus horsemeat originated from an alleged Romanian law banning carts.

New Eastern Europe writes that US President Barack Obama’s recent appointment of John Kerry as Secretary of State is unlikely to change US relations with Russia and Eastern Europe, given that he is a supporter of Obama’s “reset policy” towards Russia.

The summit last week also called for an EU-US free trade summit. Lost in EUrope says that such a deal will not help growth in the EU, only globalization. Karpenteich at Blogactiv.eu takes the oppostie view, saying that plans for the transatlantic free trade area have been rightly applauded. The FT’s Brussels blog looks at the potentially ominous ramifications of the horsemeat scandal for the potential trade pact.

The European Council on Foreign Relations says that unlike in budget negotiations, the EU’s smaller states are increasingly having greater influence on European foreign policy.

Eurosearch looks at the recent EU budget negotiations from the Dutch point of view, saying that Prime Minister Rutte achieved two of his goals (securing the Dutch rebate and lowering the EU budget), but was not successful in achieving a more modern EU budget. Open Europe says that the EU budget deal has led to a highly unusual consensus in the UK’s parliament.

Beyond the Transition looks at infighting in Poland’s centre-left Palikot movement, which has been wracked by scandal and abuse comments.

The GMF blog says that despite domestic political uncertainty, Germany is likely to continue to lead Europe, and to remain pro-European no matter the result of parliamentary elections later this year.

With elections in Italy less than two weeks away, scandals in that country’s political parties have been erupting according  to Open Europe. Meanwhile, Craig Willy looks at the various candidates, some of them ex-Communist Party members.

This week sees the release of new figures that show the eurozone economies experienced a 0.6% drop in GDP in the last quarter, according to Open Europe, which also talks of a ‘trend of slow, grinding decline’. 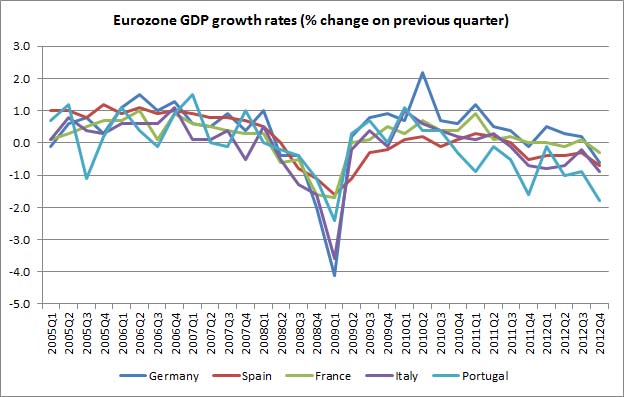 Brussels blog round up for 24-30 March 2012: Strikes in Spain, a new €800 billion bailout fund, and divine intervention for the Euro

Brussels blog round-up for 27 April – 3 May: A dreary May Day, the ECB cuts rates, and could Spain become the Florida of Europe?