Brussels blog round-up for 30 March – 5 April: A turbulent Easter for Cyprus, Iceland’s crowd-sourced constitution canned, and is the Eurogroup opaque?

Brussels blog round-up for 30 March – 5 April: A turbulent Easter for Cyprus, Iceland’s crowd-sourced constitution canned, and is the Eurogroup opaque?

In the aftermath of the Cyprus bailout crisis, The New Federalist wonders if the Cyprus bail-in is now a model for rescuing EU member states. Meanwhile, Lost in EUrope says that the crisis has shown that the ‘euro bosses’ act arbitrarily, and that the monetary union has become a ‘reign of terror’. Global Perspectives at Blogactiv.eu says that Brussels’ demand for bank depositors to pay for Cyprus’ bail-in has changed the way we define risk in Europe. On Tuesday, Charlemagne reports on the resignation of Cyprus’ Finance Minister Michalis Sarris, following the conclusion of IMF-EU bailout negotiations. Open Europe says that the resignation is part of a what has been a turbulent Easter for Cyprus. Looking over the handling of the crisis, Coulisses de Bruxelles writes that the Eurogroup of eurozone finance ministers is unaccountable and opaque, and argues for more democratic control so that the euro can survive.

Grahnlaw wonders if Berlin is actually the capital of Europe, while Au Cafe de L’Europe looks at proposals being debated by the European Parliament to reinstate a single constituency for all of France, as was the case between 1979 and 2004. In 2014, EU leaders Herman Van Rompuy, José Manuel Barroso and Catherine Ashton are due to step down. The Centre for European Reform looks at who might  replace them, especially in light of the European Parliament’s new role in in electing them.

Lost in EUrope says that unemployment across Europe now stands at 19 million, a rise of 2 million since 2012. Meanwhile, on Thursday the European Central Bank announced that it would leave interest rates unchanged. It’s not that simple has an interesting annotated version of the press conference.

Verfassungsblog reports this week that Iceland’s much lauded crowd-sourced constitution has been killed by that country’s parliament.

A Fistful of Euros says that President Francois Hollande’s policies to reduce France’s deficit are unlikely to be successful, given the currently poor state of the European economy. Tuesday sees a confession by former French Minister of the Economy Jérôme Cahuzac that he possessed a foreign bank account of €600,000, according to French Politics. Cahuzac had denied this until now.

Beyond the Transition says that Poland’s worsening public finances are likely to mean that a 2011 increase in VAT to 23% will remain in place. This relatively high level of VAT exposes the regressive nature of much of Poland’s tax system according to the article.

As Madrid continues with its bid to host the 2020 Olympic Games, Nada es Gratis looks at the differences of opinion between economists, who are against holding the Games, and politicians and citizens, who are in favour.

On Wednesday, Open Europe reports on the continued efforts to form a government in Italy. President Giorgio Napolitano has created two commissions to find common ground between the political parties with the hopes of forming a coalition government within ten days.

This week, UK Prime Minister David Cameron gave a speech on the rights of immigrants to access benefits. Beyond the Transition says that the speech has been praised by the far-right French party, the Front National, and that it is an attempt by Cameron to blame ‘external enemies’ for the country’s economic problems.

European Geostrategy looks at defence corporation EADS’ moves to reduce its political dependence on Germany and France, in the wake of its failed merger with BAE Systems last October.

The FRIDE blog takes a close look at the EU’s relations with Georgia, saying that if the country is to become closer to the EU it needs to strengthen its democracy, reform its judiciary, and tackle corruption.

European Union 2.0 discusses the European Public Sphere, finding that there have been over 1 million tweets about Cyprus in the past month: 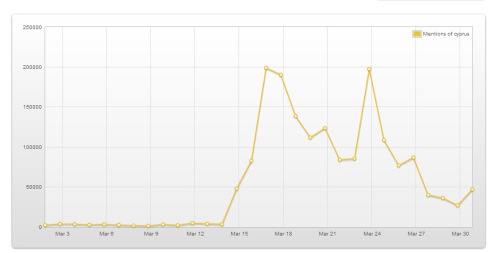 Jon Worth calls for adjustment to daylight savings time to give Europeans four more weeks of lighter evenings, while PolsciEU heads out of the Eurobubble and back again.

On 1 April, Coulisses de Bruxelles reports that the European Commission is looking to standardise animal sounds in comics.

Brussels blog round up for 29 September – 5 October: Georgia votes, the third phase of the eurocrisis, and is Mitt Romney anti-EU?

Blogs on European affairs are written by insiders. There is a need for these EU specialists and academics to bring their debates to the digital public.