John Van Reenen analyses the economic legacy of Margaret Thatcher. In the late 1970s, when the UK was behind other developed nations in terms of material wellbeing, her supply side policies spurred economic revival. There is a substantial body of evidence suggesting that a range of important policy changes initiated by her underpinned these economic gains. Nevertheless, there are many important economic and social failures that are part of the Thatcher legacy.

Much virtual ink has been spilled this week on the legacy of Mrs. Thatcher, so it is with trepidation that I make yet another contribution. And as with all social science it is notoriously hard to know what the world would have looked like “but for” the election victories of Mrs T. But we must try.

As a student I was not a fan of her government, but in retrospect I believe it is clear that the important changes in economic policies that began at the end of the 1970s contributed to the reversal of a century of UK relative economic decline. Her macro-economic policies have a mixed record, but the micro-economic policies have had a more enduring success. In particular, the supply side policies she launched to make labour and product markets more competitive and flexible have been broadly continued under subsequent Conservative (under John Major) and Labour (under Tony Blair and Gordon Brown) administrations.

Although the UK has enjoyed significant improvements in material wellbeing for well over two centuries, UK GDP per capita was in relative decline compared with other leading countries, such as France, Germany and the US, from at least 1870 onwards (see Figure 1). The UK’s relative decline reflected an almost inevitable catch-up of other countries whose institutions created the right kind of investment climate. But by the late 1970s the UK had been comprehensively overtaken: US GDP per capita was 40 per cent higher than the UK’s and the major continental European countries were 10-15 per cent ahead. The subsequent three decades, in contrast, saw the UK’s relative performance improve substantially so that by 2007, on the eve of the crisis, UK GDP per capita had overtaken both France and Germany and reduced significantly the gap with the US. 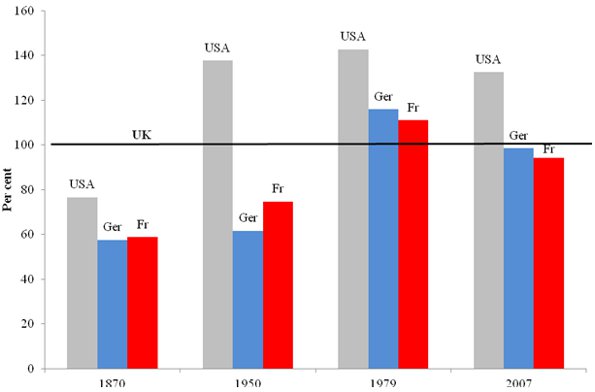 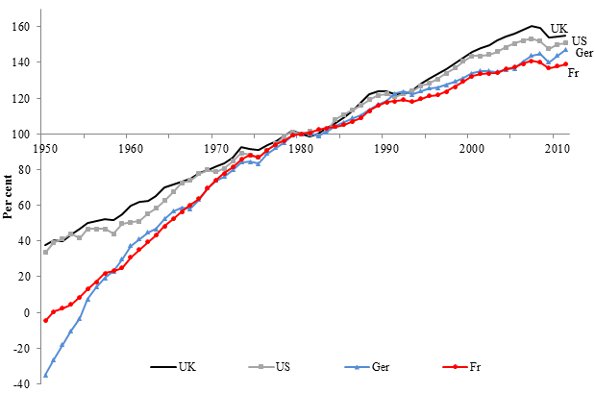 Notes: GDP is US$, constant prices, constant PPPs, base year 2011. For each country the series is set to one hundred in 1980, so the level of the line in any year indicates the cumulative growth rate (for example, a value of 110 in 2001 indicates that the series has grown by 10% between 1980 and 2001). The steeper the slope of the line, the faster growth has been over that period.

Figure 2 shows trends in UK GDP per capita since 1950. After falling behind for most of the post-war period, the UK had a better performance compared with other leading countries after the 1970s. This continues to be true even when we include the Great Recession years post-2008. Part of this improvement was in the jobs market (more people in work as a proportion of the working age population), but another important aspect was improvements in productivity. Figure 3 illustrates this for GDP per worker covering the current downturn after 2007. Contrary to what many commentators have been writing, UK performance since 1979 is still impressive even taking the crisis into consideration. Indeed, the increase in unemployment has been far more modest than we would have expected. The supply side reforms were not an illusion.

The productivity performance in the pre-crisis years do not simply reflect the dominance of the financial services “bubble” over all other aspects of the economy like manufacturing. First, the improvements were spread across industrial sectors (Figure 3). Financial services contributed only about 10 per cent of the productivity growth seen since 1979. Second, the way the Office of National Statistics measures GDP places substantial limitations on the potential for the measurement of financial services to bias GDP calculations significantly. 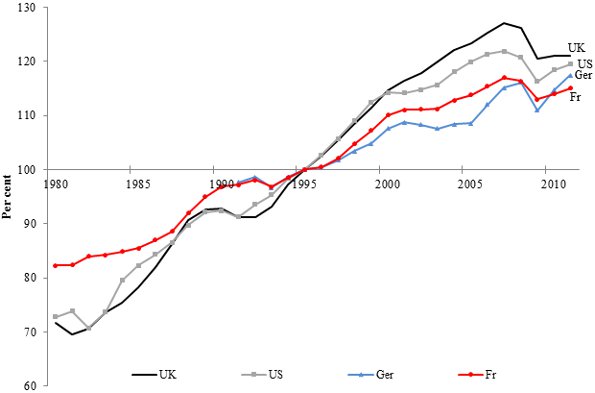 Notes: GDP is US$, constant prices, constant PPPs, base year 2011. The number of working age adults, which is obtained from the US Bureau of Labour Force Statistics, includes the civilian population aged over 16. Data for unified Germany is from 1991. For each country the series is set to one hundred in 1995, so the level of the line in any year indicates the cumulative growth rate (for example, a value of 110 in 2001 indicates that the series has grown by 10 per cent between 1995 and 2001). The steeper the slope of the line, the faster growth has been over that period. 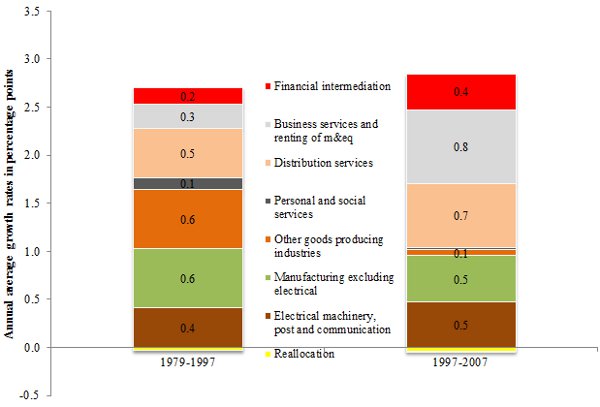 Notes: These numbers are for the ‘market economy’. This excludes the sectors where value added is hard to measure: education, health, public administration and property.

Her policies did matter

There is a substantial body of evidence suggesting that a range of important policy changes underpinned these economic gains (see for example Corry, Valero and Van Reenen 2011; Card, Blundell and Freeman 2004; OECD 2012a). These include increases in product market competition through the withdrawal of industrial subsidies, a movement to effective competition in many privatised sectors with independent regulators, a strengthening of competition policy and our membership of the EU’s internal market. There were also increases in labour-market flexibility through improving job search for those on benefits, reducing replacement rates, increasing in-work benefits and restricting union power. And there was a sustained expansion of the higher education system: the share of working-age adults with a university degree rose from 5 per cent in 1980 to 14 per cent in 1996 and 31 per cent in 2011, a faster increase than in France, Germany or the US. The combination of these policies helped the UK to bridge the GDP per capita gap with other leading nations.

Most, but not all of these were initiated by Mrs Thatcher. She was initially against large-scale foreign investment in the UK and takeovers. But the success of new plants, such as Nissan’s car plant in Sunderland (still the most productive in Europe) convinced her of its benefits. The “Wimbledon” economy where we are relaxed about the nationality of who provides high quality jobs so long as they are here has persisted. Her approach to union reform and privatisation was also pragmatic and step by step: she was less of an ideologue that often believed.

Her Failures and the Future

Nevertheless, there are many important economic and social failures that are part of the Thatcher legacy. First, there was a tremendous growth of inequality both in pre-tax incomes and through changes to tax and benefit policies that favoured the rich. Figure 5 illustrates this for wages showing a dramatic upswing in inequality between the richest and poorest 10 per cent. Some of this inequality was addressed by the Labour governments through tax credits and the minimum wage, but the share of income going to the top 1 per cent continued to rise inexorably, driven by the financial sector. This was the second failure – excessive deregulation of financial services starting with Big Bang in 1986, but continuing until the eve of the 2007 crisis. Even free markets need to be properly regulated. Third, her early years were marked by a failure to understand that the public employment service needs to be active in helping people find jobs. A major mistake was splitting benefit offices from job centres and pushing many unemployed onto disability benefits (which are much harder to escape from) in an effort to massage down the unemployed claimant count statistics. Unemployment claims peaked at over 3 million in 1986 when Restart was launched – a policy that finally put more effort into getting the unemployed searching for work and was deepened under the “New Deal” policies after 1997. 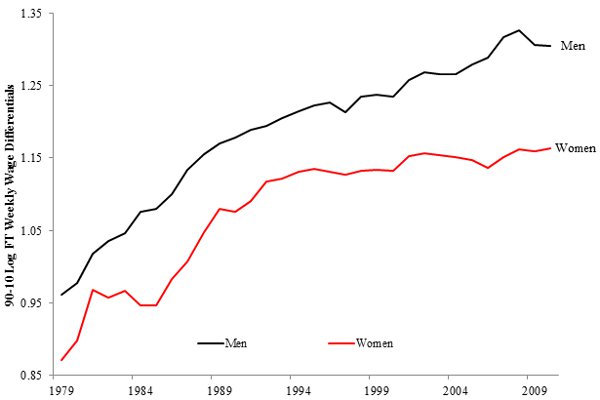 Finally, and perhaps most importantly, there was been a failure of long-run investment: in infrastructure, in the skills of those at the lower end of the ability distribution and in innovation. The UK addressed some of its problems but this failure to invest in prosperity is the main challenge we face as a nation over the next 50 years. The LSE Growth Commission has put forward some proposals to deal with this – let’s hope the current generation of political leaders takes heed.