How does regional economic integration impact upon global economic governance? André Broome examines the evolution of bureaucratic cooperation between the International Monetary Fund (IMF) and the European Union between the signing of the Maastricht Treaty in 1992 and the launch of the euro in 1999. He finds that the exercise of informal influence by advocates for change within international organisations can shape the outcomes of formal decision-making processes, even when these cut across the national preferences of powerful states, but can also impede the development of robust formal structures for institutional cooperation that are needed for effective crisis management.

In the aftermath of the global financial crisis and the continuing Eurozone sovereign debt crisis, the IMF has become a major player in the European economy through its role as a policy enforcer and financial sponsor of sovereign bailout packages. This marks a critical turning point in the IMF’s relations with the European Union and with individual EU borrowing states. In contrast to the IMF’s declining relevance and reduced financial resources during the decade following the Asian financial crisis in 1997-98, the boost to the organisation’s lending capacity following the Group of Twenty leaders’ summit in London in 2009 has enabled it to play a key role as a financial contributor to bailouts for European countries in financial distress. Following the financial meltdown in Iceland in 2008, before which no West European country had borrowed from the organisation for three decades, the IMF has negotiated loan programmes in conjunction with its ‘troika’ partners the European Commission and the European Central Bank for an increasing number of Eurozone economies. As the most recent IMF-sponsored Eurozone bailout for Cyprus has starkly demonstrated, effective crisis management for economies in financial distress is impeded by the competing bureaucratic mandates and political pressures that different organisations must respond to.

These events were hard to imagine during the lead-up to the launch of the euro in 1999. Indeed, for three decades prior to the onset of the global financial crisis European economies had been able to avoid turning to the IMF for financial support when they faced financial difficulties by drawing on regional balance-of-payments assistance. European countries in financial distress could access the Medium-Term Financial Assistance Facility for balance of payments support, as well as the Short-Term Exchange Rate Support arrangements for currency interventions, which were initially established in 1971 and were accessed during the two decades preceding the launch of the euro by countries such as France (1983), Greece (1985, 1991), and Italy (1993). Yet by cutting off access to existing regional support mechanisms once countries adopted the euro, the process of Economic and Monetary Union (EMU) during the 1990s increased the probability that Eurozone member states would need the IMF’s financial assistance in future financial crises.

The contemporary politics of IMF–EU cooperation has been shaped by the co-evolution of bureaucratic change within both the EU and the IMF in response to European monetary integration during the 1990s. Specifically, the dynamics of EMU presented four key policy challenges for the IMF, relating to:

Each of these challenges posed significant problems for how EMU would affect the international monetary system, as well as the rights and obligations of Eurozone member states within the IMF. The implications of these challenges are summarised in Table 1, below. Two of these are of particular significance for the dynamics of IMF and EU cooperation in Eurozone crisis management: the IMF’s macroeconomic surveillance role and its emergency financing role.

Table 1: The Policy Challenges of EMU for the IMF 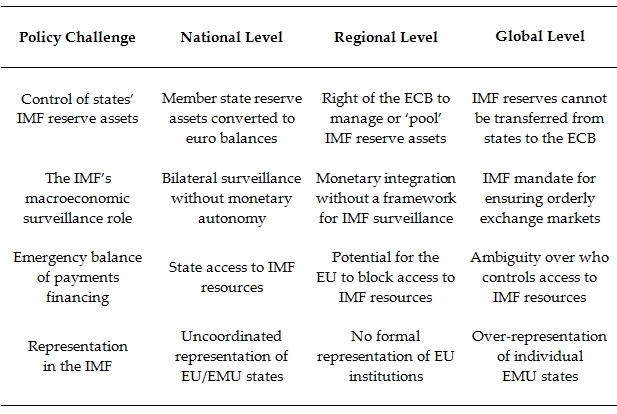 Source: Broome, André (2013) ‘The Politics of IMF–EU Cooperation: Institutional Cooperation from the Maastricht Treaty to the Launch of the Euro’. Journal of European Public Policy 20(4): 589-604.

The IMF’s bilateral surveillance role is the primary building block for its policy dialogue with both borrowing and non-borrowing member states. Faced with the prospect of the euro gaining overnight status as the world’s second most important currency, bureaucratic actors within the IMF used their sources of informal influence to gradually push the organisation to formalise regular surveillance at the regional level for the Eurozone. This encountered strong opposition from both Eurosceptic EU members such as the United Kingdom, as well as pro-EMU members such as Germany and France. The former sought to avoid the IMF treating the EU ‘like a state’, while the latter wished to marginalise the potential for external criticism of Eurozone policies. Through the construction of an internal bureaucratic consensus on how to adapt the IMF’s surveillance policies to the advent of EMU, the IMF drew on the organisation’s formal mandate for international monetary stability to overcome state opposition to IMF surveillance over the Eurozone. This was helped by strong support for formalising the IMF’s policy dialogue with Eurozone officials from the United States. Despite eventually reaching an agreement in 1998 that the IMF would conduct regular ‘Article IV’ surveillance consultations with the Eurozone, similar to bilateral member state policy dialogue, continuing political sensitivities and member state opposition to deepening policy cooperation between the IMF and Eurozone policymakers constrained the potential for strong bureaucratic ties to develop prior to the global financial crisis.

Economic and monetary union also raised important questions about the ability of Eurozone members to access emergency financing, should the need arise, from the IMF. At the heart of debates over how EMU would impact upon the rights and obligations of member states in the IMF was a concern with whether monetary integration could lead to individual countries being shut off from the IMF’s support in a financial crisis, if this was opposed by other Eurozone members, the European Commission, and the European Central Bank. Short of the merger of Eurozone members into a new political unit that could amalgamate existing state membership rights and obligations, the IMF drew on the legal principle of res inter alios acta to argue that an agreement between others – such as monetary integration – cannot adversely affect the rights of an organisation that is not party to it. The IMF therefore decided that any EMU decisions or policies that were incompatible with the rights and obligations of states as individual members of the IMF could not affect the exercise of those rights, nor could it exempt them from their existing legal obligations.

In short, Eurozone members would maintain in full their ability to request the IMF’s financial assistance in the event of an economic crisis, regardless of whether this was supported or opposed by other Eurozone member states or institutions (notwithstanding the potential for a loan to be blocked by larger Eurozone member states through their representation on the IMF’s Executive Board). While these decisions over IMF surveillance policies and loan access policies for Eurozone members upheld the principle that states’ existing obligations within international organisations trump the development of new regional agreements, they left unresolved a host of broader questions about how the dynamics of crisis management in Europe might work in response to crisis events such as those of the last few years. One result of this process of co-evolution between the EU and the IMF without a clear institutional design for crisis management during the 1990s has been the problem of a ‘clash of organizations’ in Europe’s debt crisis.

EU institutions, Eurozone member states, and the IMF are each responsive to different bureaucratic mandates, incentive structures, and political environments. In crisis conditions, however, ad-hoc processes of co-evolution for institutional cooperation are likely to come under severe strain at best, or at worst may simply breakdown. What is needed instead is a clear institutional design that formalises organisational roles and responsibilities between the EU and the IMF for the management of sovereign bailouts for distressed Eurozone economies. Such a framework could continue to allow sufficient policy flexibility to avoid rigid uniformity of treatment across countries with different economic conditions and challenges, while helping to stabilise the expectations of different actors – from households to national policymakers to bond-holders – over the dynamics of Eurozone crisis management and the terms of bailout packages. A system of multi-level governance within clearly-defined parameters of policy responsibility could have helped to avoid the debacle of the Cyprus bailout, where proposals to tax retail bank deposits in one of the smallest Eurozone economies risked undermining social trust in banking across the Eurozone as a whole.