As the European Commission predicts that the EU will exit recession in the autumn, Lost in EUrope wonders why EU experts are so optimistic given poor domestic demand, and their reliance on the (unlikely) chance of recovery in the global economy. Meanwhile, A Fistful of Euros unpacks the different interpretations of the reasons for the crisis among the Troika, finding that the IMF’s interpretation is the most radical in its focus on the political reasons behind the crisis. At Blogactiv.eu MEP Marek Siwiec looks at unemployment rates across the EU, arguing that there is no connection between a country being a member of the Eurozone and its unemployment rate. Finally, It’s not that simple says that austerity is an “answer that appears to be in search of a question”.

Commenting on recently leaked European Commission plans to regulate the shadow banking sector, Open Europe says that while the proposals are still at an early stage, the Commission must be wary of perverse effects from regulating specific financial instruments. Meanwhile, Real Time Brussels says that there has been little progress towards a common framework for winding down failed banks, something that EU Finance Ministers have previously said will be agreed by June. As plans for a Financial Transactions Tax across 11 EU members continue, Lost in EUrope looks at ongoing efforts against the tax. This week, the criticisms are from the Netherlands’ Finance Minister, Jeroen Dijsselbloem, who also heads the Eurogroup of Eurozone Finance Ministers.

Discussing new European Commission proposals to modernise the agri-food chain in Europe, Lost in EUrope also says that criticisms from the Green party show that the Commission has again made an unnecessary proposal at the wrong time. Meanwhile, the Centre for European Reform, commenting on the EU’s efforts to reform its Emissions Trading Scheme, argues for a price floor to make the price of carbon high enough to attract investment in low-carbon options.

Ahead of the 63rd anniversary of the Schuman declaration (which led to the creation of the EU) on Thursday, Kiels Prat in Europe wrote that, in the face of efforts aimed at its deconstruction,  the EU needs to get sexy for its citizens. On Europe Day itself, Mary Honeyball MEP looked at the foundations of the EU with a profile of Robert Schuman, while European Commissioner Kristalina Georgieva says that “despite all the problems we [Europe] have, we still live in one of the world’s most secure, wealthiest, freest spots”. Meanwhile, Rhein on Energy and Climate has six ways for the EU to mitigate its current difficulties in policy making that arise from differences in member states’ national mentalities.

Dr Sean’s Diary looks at how the drift towards technocratic crisis management has affected Central and Eastern Europe. He argues that technocracy is relatively rare in that part of Europe, and that when it has arisen: “technocratic caretaker administrations often seem as much as a tactic to buy time and placate angry electorate[s] and ensure business as usual”. This week also saw Lithuania awarded the Charlemagne Prize for the way it has handled the crisis, according to Lost in EUrope. But, he says, the prize belies a number of social problems in the country such as high rates of unemployment and emigration in the country.

Au Cafe de L’Europe looks at whether or not France is a ‘dunce’ on energy transition and the fight against global warming, given the importance still placed on the country’s nuclear policy. The GMF blog has a close look at France’s just released White Book on Defence and Security, which outlines cuts to French forces in the face of budgetary pressures. They say that despite the cuts, France will remain in the top tier of Europe’s military powers. Meanwhile, French Politics looks at whether or not the recent vote in favour of gay marriage in the French National Assembly has contributed to a Catholic revival in the country. French President François Hollande recently announced a new ten-year plan for public investment. French Politics is supportive of the plan, but says that the ‘collaborative’ approach of its announcement, together with the Prime Minister, makes the President look vague.

Revolting Europe looks at lessons from Italy’s privatisations over the past thirty years, saying that it has led to savings of €38 billion in debt interest repayments, but also 225,000 job losses. Wishing on Europe at Blogactiv.eu looks at the new Italian government’s very difficult position – it must find a source of growth, but from where?

In the wake of World Press Freedom Day last week, New Eastern Europe looks at a recent decision by Romania’s Constitutional Court that an earlier Supreme Court decision that insult and slander was unconstitutional. This decision may make it difficult for journalists investigating corrupt politicians.

Lost in EUrope looks at recent claims that Germany is now richer than ever, despite the Euro crisis. The German Alternative für Deutschland party, which advocates an exit from the Euro has been in the news recently. Eurotales at Blogactiv.eu says that the party’s popularity should lead those in Germany who support the EU and the euro to have more open arguments and better explain their point of view to the public.

The UK faces a similar issue with successes for the anti-EU UKIP party in local elections last week. Euromove at Blogactiv.eu argues that UKIP’s successes do not mean that the UK’s three main parties should copy its discourse and rhetoric. On Tuesday, former Conservative Minister Lord Lawson announced that he would vote ‘No’ in a UK EU referendum. Open Europe assessed the impact of his intervention, surmising that it was not game-changing, and more important to the Westminster bubble than to the wider EU-debate. The European Council on Foreign Relations argues that UKIP is part of a broader phenomenon that has been appearing across the developed world: a backlash against globalisation.

The European Council on Foreign Relations reflects on Vladimir Putin’s first year back in power as Russia’s President, saying that while he remains personally popular, there is growing discontent among many who see his government as corrupt.

The GMF blog looks at Iceland’s strategic relevance, saying that its role in global affairs is at a critical juncture, given its increasingly close relations with China and uncertainty over its relationship with the EU.

Graph of the Week

A Fistful of Euros wonders if Ukraine is heading for a demographic meltdown, given its relatively low birth rate: 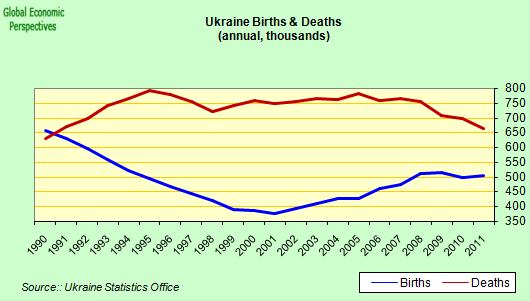 What has President of the European Council, Herman van Rompuy been up to this week? This week he visited a Brussels open day.

Real Time Brussels says that the outgoing US Ambassador to Belgium has now visited every single one of the country’s 589 towns.

Lost in EUrope looks at the cost explosion of ‘Herman’s Egg’ (the new building for the Council of Ministers in Brussels), the budget for which has gone from €250 to €327 million.

Brussels blog round up 5 – 11 April: Hungary’s radical right, Finland’s economy, and is Greece on the road to recovery?