Low bond yields have saved the German government €80 billion in interest since 2009.

Low bond yields have saved the German government €80 billion in interest since 2009.

The Eurozone crisis has created huge volatility in the market for government bonds, with the heavily indebted countries on the Eurozone’s periphery facing significantly higher rates. One side effect of this volatility, writes Jens Boysen-Hogrefe, is that Germany has been seen as a “safe haven“ for those who wish to invest in government debt, leading to unusually low yields for government bonds. He finds that these low yields have saved the German government over €80 billion in the past five years.

Yields for German government bonds reached record lows in recent months. The downturn in yields has now lasted since the start of the Great Recession, apart from a short disruption in the first half of 2011, and this has affected bills and bonds over all maturities (as shown in Figure 1 below). Papers with short maturities have partly reached negative yields. Having these low yields for such a long time have made a sizable relief for the public budget in Germany. This relief has been especially pronounced for the federal government which is responsible for roughly one half of Germany’s public debt. The gains of the federal government may be especially pronounced, since the bonds that they hold may function as a “safe haven” in Europe’s debt crisis. Other German public debtors, like the Länder and communities, are benefiting from low yields, too, but to a somewhat smaller extent. 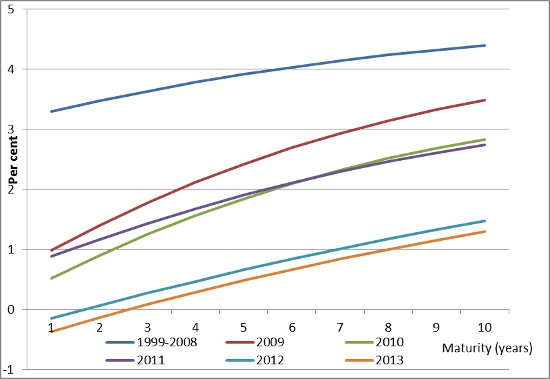 Quantifying the level of relief for the federal government from these lower rates is only possible with some strict assumptions, since bond yields depend on several impact factors. However, one may argue that the ten years before the crisis were rather “normal” with respect to interest rates and business cycle movements. Accordingly, the mean interest rates from that period can be used as a benchmark. A calculation for all bills and bonds that have been issued since 2009 shows that current interest payments in 2012 were lower by roughly €10 billion than in the benchmark scenario (in the benchmark scenario bills and bonds accrue interest according to their mean interest rates from 1999-2008). It can be expected that the relief for the federal budget will increase to €13 billion this year. Summing up all the gains that are due to lower interest rates for federal government bonds and bills issued between 2009 and 2013, gives the sizable figure of roughly €80 billion.

The decline of bond yields is mainly driven by the low business cycle dynamics in the euro area and the interest rate policy of the European Central Bank (it can be assumed that bond markets in the euro area are highly integrated and therefore German bond yields should depend on euro area macro data). A model that mimics bond yields in the years 1999-2008 and that controls for business cycle conditions and for ECB interest rates also shows a substantial drop in bond yields during the Great Recession and the debt crisis. However, since 2011 actual bond yields and those predicted by the model differ remarkably. This difference can be interpreted as the gains that the German federal government has experienced due to the “safe haven” effect. They would presumably not exist if other countries were not in trouble. The same calculation as above but with interest rates stemming from the model instead of historical mean values shows that almost €2 billion €10 billion interest reduction in 2012 has been due to the “safe haven” effect. In 2013 the corresponding figure increases to roughly €3 billion.

Interestingly, the result of the model also fits French bond yields in recent years. Note that French and German bond yields were almost identical before 2008. It seems that the relation between French bond yields and euro area macro data has been changed by neither the Great Recession nor the debt crisis. This means that there is no particular additional risk premium, as is the case for Italy, and no “safe haven” effect like for Germany, as can be seen in Figure 2. The comparison between French and German bond yields show that the “safe haven” effect increased during 2011 when rumors about a break–up of the euro area became more intense. Finally, close to the announcement of the open market transactions program by the ECB, spreads between French and German bonds shrank but did not vanish. The French budget is benefiting from low bond yields, too, but without the “safe haven” effects that Germany currently enjoys. 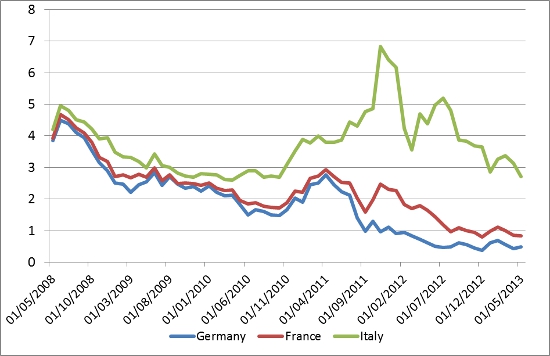 The overall-effect on the public budget in Germany will further grow in the coming years. The ECB has just lowered its main interest rates (to 0.5 per cent), which are also relevant for the pricing of bonds, and there are still several billions worth of federal government bonds with maturities of five to thirty years that were issued before the current low yield period and that will soon be replaced. An overall benefit of more than €100 billion may be the case. (Note that these figures do not include effects that are due to debt that is hold by the Länder and communities. Both have benefited from lower interest rates in recent years, too, but not at the same scale as the federal government.) However, sooner or later the turnaround in bond yields will come. Thus, the gains from these low interest rates should not be taken as a signal to boost public debt in Germany. These gains are one-offs, rather than a structural improvement of the budget. Accordingly, the current excellent German budget figures should be interpreted with some care.

From a European perspective, it might be argued that these remarkable one-offs are benefits that the German government have experienced due to the debt crisis and that it would be reasonable to spend this amount for support of those countries in the euro area that are most affected by the debt crisis. However, one might also argue that only those benefits should be counted that are due to the “safe haven” effect since countries like France are benefiting from effects that are due to the ECB policy as well. The “safe haven” effect is only a fractional amount and is comparatively low given the financial needs of the distressed countries. Finally, benefits due to low government bond yields should not be the basis to calculate the commitment Germany is willing to make in the debt crisis.

Jens Boysen-Hogrefe – Kiel Institute for the World Economy
Jens Boysen-Hogrefe is a research fellow at the Kiel Institute for the World Economy (IfW). His research interests include fiscal and monetary policy, financial markets ad business cycle forecasts. He is member of the “Arbeitskreis Steuerschätzungen”, a council of experts that makes official tax projections for the German government, and a regular participant of the “Gemeinschaftsdiagnose”, a working group of economic research institutes that provides a benchmark business cycle forecast for the German government.

While Europe’s political leaders continue their diplomatic dance, real power in the eurozone has shifted to central bankers.

For Greece, participatory budgeting may be a solution to the tension between austerity and democracy.

One-dimensional austerity programs to deal with “guilty” countries are endangering the Euro and the European Union.