Despite the use of qualified majority voting, a high percentage of decisions in the Council of the European Union are still made by consensus. Frank Häge outlines a model which can potentially explain this phenomenon. He argues that the high numbers of decisions made by consensus are in fact an unintended by-product of coalition building within the Council: states band together to form blocking coalitions, with eventual decisions reflecting a compromise between these coalitions (and therefore a consensus between all states). This explains why decisions made by consensus are still extremely common, despite the EU enlargements which have taken place since the mid-1990s.

In recent years, media reports about how the EU is trying to tackle the financial crisis have often given the impression that EU policy is dictated by a few large member states. This picture is quite a misrepresentation of how the EU actually works. When it comes to the adoption of new laws, the Commission and especially the European Parliament play a significant role in the decision-making process; and decision-making amongst government representatives in the Council is much more equitable than often suggested. In fact, one of the major puzzles about Council decision-making is the high rate of consensual decisions even in areas where the formal rules allow for the adoption of law by a qualified majority of member states. Every year, about 75 to 85 per cent of the Council’s legislative decisions are made without negative votes or abstentions.

A number of explanations have been proposed to account for the high consensus rate of Council decisions. First, consensus might simply reflect common agreement about the desirability of policy change. Second, governments might try to make sure that everybody is ‘on board’ because of concerns about the correct and timely implementation of EU policies at the national level. Third, vote trading between member states across issues or proposals allows the creation of larger compromise packages. Finally, a ‘consensus reflex’ developed as a result of years of Council decisions requiring unanimous consent might still be operating in the Council even though the institutional context that originally required unanimous agreement is not present anymore.

Each of these theories is a generally plausible candidate for explaining the high consensus rate. However, all of them have trouble accounting for the lack of change in the consensus rate despite large increases in EU membership size. The big bang enlargement in 2004 increased the preference heterogeneity of member states, so common agreement on policy change should have become less likely. The cost-benefit calculations of bringing everyone ‘on board’ should also have tilted in favour of less accommodation towards recalcitrant member states. Accommodating everyone becomes more costly the more member states there are. Successful exchanges of votes that make all member states better off should have become exponentially more difficult as well. Identifying beneficial vote trades is much easier with 15 than with 25 member states. Finally, informal norms and rules of behaviour that underlie the consensus reflex should have been harder to sustain and enforce after an influx of a large number of uninitiated new member states. In short, based on existing theories, we would have expected the consensus rate to drop after successive enlargements, yet as Figure 1 shows, the empirical record does not bear out this expectation. 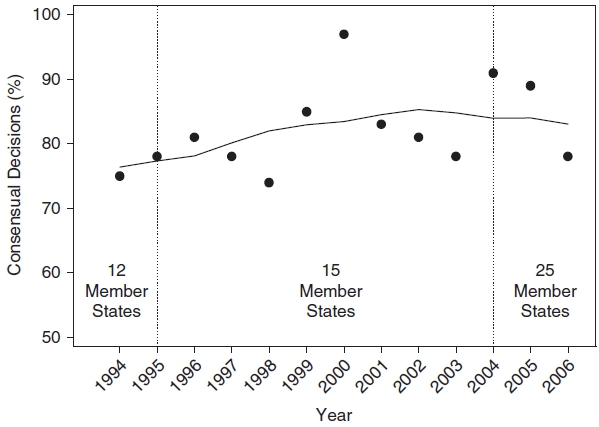 Notes: The figure plots the percentage of consensual legislative decisions of the Council per year from 1994 to 2006. The curve was produced by a locally weighted regression (Lowess) smoother. The two vertical dotted lines indicate the enlargements of the EU in 1995 and 2004, respectively.

In my research, I developed a coalition-building model whose predictions are both consistent with the observed consensus rate and the insensitivity of the rate to changes in membership size over time. I argue that consensus emerges more or less coincidentally from the coalition-building process itself. If the formal rules allow the adoption of Council decisions by qualified majority, member states have an incentive to actively engage in the negotiation process to ensure that they are not marginalised. Government representatives are considered to be boundedly rational actors. Their behaviour is goal-oriented, but in the complex environment of multilateral multi-issue negotiations of the Council, they follow relatively simple heuristics to pursue their policy goals.

A plausible heuristic for government representatives is to band together with negotiators from other states with similar positions until their coalition is large enough to formally block a decision. Being part of a blocking coalition ensures that the member state’s views cannot be ignored; and forming those coalitions with like-minded states ensures that policy losses remain relatively small. As a result of this behaviour, larger and larger coalitions form until either one coalition is large enough to ‘unilaterally’ adopt the proposal through a vote, or all member states are organised in two or more blocking coalitions. In the latter case, the agreement of all blocking coalitions is required to adopt the proposal. Thus, in this situation, consensus emerges endogenously as an unintended by-product of the coalition-building behaviour of negotiators who seek to form blocking minority coalitions.

I formalised the theoretical argument in a computational agent-based model and used a case study of the adoption of the Council’s common position on the batteries directive to illustrate the empirical plausibility of its coalition-building dynamics. In the case of the batteries directive, as in many of the model simulation runs, larger and larger coalitions formed over time until the final compromise was in the end brokered amongst a number of blocking minority coalitions. In addition, the assumption of Council negotiators as blocking-minority seekers is supported indirectly by evidence from existing qualitative research, interview studies, and practitioner reports that stress the central importance of coalition-building in the Council negotiation process.

However, the model is not only based on empirically plausible behavioural rules governing the interactions of agents; it is also able to predict the consensus rate in the Council with quite some accuracy. For the three periods with different membership sizes between 1994 and 2006 (12, 15, and 25 member states, respectively), the model predicts consensus rates of 89, 85, and 85 per cent, compared to the observed mean consensus rates over those periods of 75, 82, and 86 per cent, respectively. Furthermore, this prediction accuracy is achieved without taking into account any empirical information about the particular negotiation processes during that period of time. The only changeable parameters of the computational model are the voting threshold and the number of member states. To generate the predictions about the consensus rate, the voting threshold was set to the real-world threshold of 72 per cent and membership size to the respective number of member states during the particular time period. The simulation was then run 1,000 times with initial policy positions of actors chosen randomly at the beginning of each run. Note also that the predicted rate is rather insensitive to changes in membership size, although the model was not explicitly designed to reproduce this feature of the observed consensus rate.

Given the good predictive record of the model, I further investigated various ‘if then’ scenarios by varying the number of member states and the size of the majority voting threshold. The findings of those computational experiments further confirm that the model predictions of the consensus rate are relatively insensitive to changes in membership size. In contrast, higher voting thresholds are predicted to significantly increase the consensus rate. If the model is correct, future enlargements of the Union should not have any significant effect on the extent of consensual decision-making. However, the decrease of the voting threshold from 74 to 65 per cent in 2014, as envisaged by the Lisbon treaty, should considerably reduce the number of consensual decisions in the Council.

For a longer discussion of the topic covered in this article see: Häge, Frank (2013) Coalition Building and Consensus in the Council of the European Union, British Journal of Political Science, Vol 43 (3).