Many of the decisions made in the Council of the European Union are based on qualified majority voting, in which EU legislation can be passed if a certain threshold of support is met among member states. Frank Häge assesses the potential implications of the changes to qualified majority voting rules under the Lisbon Treaty, which came into force in November 2014. He notes that while the precise impact of the changes remains to be seen, they will have important ramifications for the overall legitimacy of the EU’s legislative process.

The Council of the European Union has been operating under a complex, non-transparent and inefficient voting system. This voting system was the outcome of political bargaining in the formulation of the Nice Treaty and has been in force since 1 February 2003.

The qualified majority rules of the Nice Treaty specify differential voting weights for member states and a triple majority threshold for the adoption of European legislation. The three thresholds are 74 per cent of member states’ weighted votes, 62 per cent of the population of the EU, and a majority of member states. The voting weight threshold raises at least two problems: At the level of individual member states, the allocation of a particular voting weight is not linked to any objective or neutral criterion, which raises equality and fairness issues. At the collective level, the high majority threshold makes it hard to reach decisions, potentially leading to gridlock and inefficient decision-making processes. Both problems throw a negative light on the democratic legitimacy of Council decisions.

To limit the ability of coalitions of large member states to block legislation, it also required that any blocking coalition must consist of at least 4 member states. In other words, the population threshold does not need to be passed when an overwhelming majority of member states (i.e. less than four are opposed) support the legislation. After the Constitutional Treaty was abandoned following rejections in referenda in France and the Netherlands, the voting rule provisions were incorporated into the Lisbon Treaty. However, to appease Poland, which reopened the issue of the voting rule in the negotiations, the application of the new voting rules was postponed until 1 November 2014.

How will the new voting rules affect Council negotiations?

In terms of voting power, individual states are affected by the new rules in different ways. Most formal analyses indicate that the large and small member states are the winners, while the medium-sized states lose out in comparison to the Nice Treaty rules. Poland and Spain are amongst the worst affected, but to a large extent because the Nice Treaty rules granted them a disproportionately large voting weight. Still, it is not surprising to find these states amongst the staunchest supporters of the old rules. The Chart below illustrates the changes by showing the difference between the percentage of votes held by each state under the old system, and the percentage of the total EU population in each state.

Chart: The changes in vote weights for the 28 EU countries under QMV (qualified majority voting) 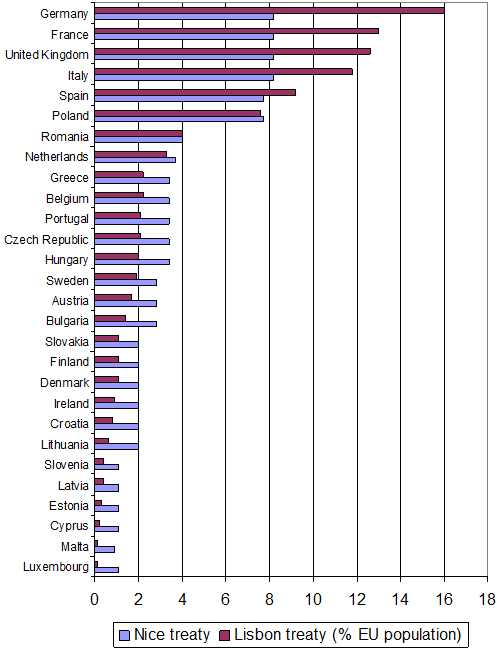 Note: The Chart shows the percentage of the total votes held by each state under the Nice rules, and the percentage of the total EU population in each state (which will determine how much of the 65 per cent threshold can be made up by an individual state under the new rules). Population percentages are based on 2013 Eurostat figures. Note that small states benefit from the second threshold, which requires a larger majority of the total number of states in the Council to agree, whereas medium-sized states do not benefit from this change to the same extent.

In terms of collective decision-making capacity, the Lisbon Treaty rules are expected to allow for considerably less efficiency than the original Convention proposal, but still much more than current Nice Treaty rules. Thus, voting power analyses would lead us to expect that the new Lisbon Treaty rules lead to more legislative decisions that are adopted quicker, and that larger and smaller states are better able to shape the outcome of negotiations than they are at the moment, while medium-sized states will have less influence. However, these expectations are based on the assumption that the formal voting rules matter for decision-makers’ behaviour and for the type and content of collective decision-making outcomes. Empirical research on Council decision-making sheds some doubt on this assumption.

In practice, member states adopt most legislative decisions by consensus. On average, only about 20 per cent of legislative acts are adopted against the expressed dissatisfaction, in form of an abstention or a negative vote, of a minority of member states. Thus, despite considerable conflict over the specifics of the formal voting rule during Treaty negotiations, the act of voting appears to be of little relevance for overcoming disagreements in day-to-day decision-making of the EU. However, whether the high consensus rate really means that voting rules do not affect the efficiency and the substantive outcome of Council decision-making depends on the reasons for why member states do not vote.

The in some respects simplest argument suggests that the high consensus rate is just the result of a genuine lack of disagreement amongst member states. According to this view, many EU policies are designed to solve collective action problems, where the gains of cooperation far outweigh comparatively minor redistributive losses. No member state has an incentive to fundamentally oppose this type of legislation. Note that this argument does not suggest that the formal voting rules do not matter in principle, it just suggest that the voting rules do not matter in practice given the types of policy problems currently addressed by the EU and the policy preferences of its member states.

While the previous argument essentially suggests that member states do not cast negative votes because they do not disagree, most other arguments suggest that disagreement is overcome or accommodated in some way to ‘neutralise’ the effect of the formal voting rule. Chief amongst them is a sociological argument stressing the importance of informal norms, values, and procedures sustaining a ‘culture of compromise’ and a ‘consensus reflex’ in the Council, which is passed on to new entrants through socialisation. According to this view, norms prescribe consensus-seeking behaviour as the appropriate course of action in Council negotiations and thereby supplant the formal voting rule.

Another perspective suggests that consensual decisions result from concerns about compliance. Most EU legislation has to be implemented, often in legal as well as in practical terms, by member state governments and national administrations. In this view, the concerns of a minority or even individual member states’ need to be taken into account in the formulation of EU policy to avoid late, incorrect or non-implementation at the national level. If compliance problems induce member states to try to get everybody on board, the informal decision-rule is effectively unanimity, regardless of the majority threshold of the formal voting rule.

However, while the previous arguments predicted consensus regardless of the size of the voting threshold, and thus no effect of changes in the voting rule, it is likely that a lower voting threshold will require fewer vote trades to reach an agreement, and that the decision-making process will speed up accordingly. As a result of fewer vote trades, the size of the oversized majority should get smaller and the substance of the agreement should change as well.

In sum, the existing theoretical literature provides divergent expectations about the effect of a change in the voting rules. Which prediction will prevail, and thus whether or not the new rules will make decision-making faster and/or result in a (moderate) redistribution of influence and power in the Council, depends on which theories best reflect the reasoning and behaviour of actual decision-makers in that institution. To be certain, any changes or a lack thereof in Council decision-making following the entry into force of the new voting rules will not only have implications for the democratic legitimacy of the EU, but also greatly increase our understanding of how that institution arrives at its decisions.