David Cameron has promised to hold a referendum on Britain’s EU membership in 2017. Costas Milas argues that talk of an exit from the EU has been a hugely unnecessary distraction that has led to economic uncertainty and higher borrowing costs. He shows this by plotting the 10-year UK yield together with the Google trends search queries index for “Brexit”. Policymakers in favour of continuing EU membership need to be vocal about why an exit would be harmful and the Bank of England should monitor Brexit talk in order to counteract its impact.

The Bank of England’s Monetary Policy Committee (MPC) has just noted that the recent rise in sterling borrowing costs is not justified by developments in the domestic economy. In fact, a number of commentators relate the recent rise in the 10-year UK yield to Fed’s talk about reversing its economic stimulus (also known as Quantitative Easing).

In our view, this is partly true as it ignores the possible effects of the so-called Brexit talk on the domestic economy. Prime Minister David Cameron promised in January 2013 to try to renegotiate Britain’s membership of the EU and to hold an in/out referendum on the issue if he wins the next national election in 2015. Since then, Britain’s policymakers have done almost nothing in spelling out the possible economic benefits of an EU exit. Instead, Brexit is a big and unnecessary distraction which adds to economic uncertainty and already impacts negatively on the economy through higher borrowing costs.

To see this, Figure 1 plots the 10-year UK yield together with a Brexit talk index.  The latter refers to the Google trends search queries index for “Brexit” (this is freely available here). The index, which peaked in January 2013 (at the very time of David Cameron’s referendum announcement), is highly correlated with the UK yield (the correlation is equal to 0.67). 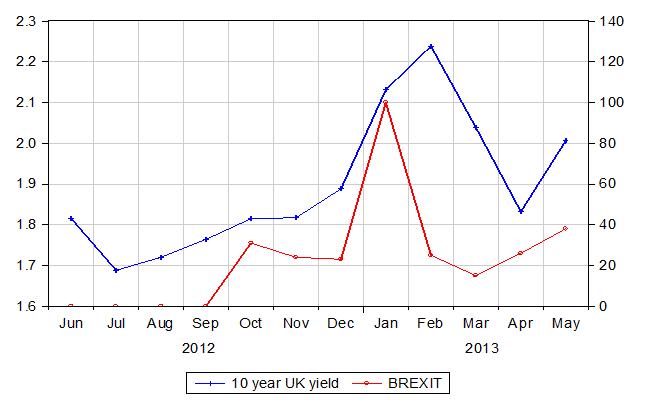 Noting that (high) correlation does not necessarily imply causation, we pursue the issue further by running a Granger causality test (named after Clive Granger, the 2003 Nobel Prize Winner in Economics) which suggests that Brexit does indeed cause movements in the 10-year yield (the null hypothesis of lack of causality is rejected at the conventional 5% level of statistical significance). Obviously, the statistical test result needs to be treated with some caution because of the short sample. Nevertheless, the policy implications of our analysis are the following:

Iceland’s economy has entered a period of recovery since 2011, however the on-going Icesave dispute has reduced public support for EU membership and the country’s government.

To ease the pain of devaluation countries should quit the euro – then instantly re-join at a weaker rate.