In Policy without Politicians a leading expert on public policy has devoted four years to interviewing middle-ranking civil servants in three languages over six jurisdictions to construct a comparative survey of bureaucratic influence on secondary legislation.  The venture may sound worthy at best, but Patricia Hogwood finds that Edward C. Page has produced a little gem: an intellectually honest, well-constructed, impeccably executed comparative study that probes beyond the speculative answers about bureaucratic influence we have become accustomed to reading. 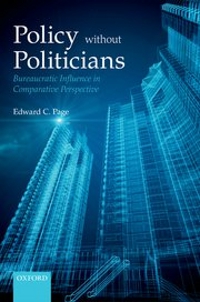 In practice, political executives can only get involved in a tiny proportion of the negotiations that produce policies in their names. This gives rise to the central questions of Edward C. Page’s book, Policy without Politicians: when do politicians get involved in policy-making, what happens when they do, and what happens when they don’t? Using a comparative framework, Page tracks the politician-bureaucrat relationship through six case studies of France, Britain, Germany, Sweden, the United States and the European Union, before assessing his findings to understand the motivations behind bureaucratic activity and the bureaucrats’ contribution to substantive policy and democratic governance. Page rightly acknowledges that a study of only fifty-two decrees cannot yield predictive theory: his more modest aim is to shed some light on processes of decision making that are generally poorly understood and to gain a fresh perspective on patterns of policy-making in western democratic systems.

What we know and think we understand about the way politicians and civil servants work together is derived from a small and rather unrepresentative sample of their work: the high-profile, high-risk sector of primary legislation. Page elects instead to test the politician-civil servant relationship through the everyday business of governance, the delegated legislation that is largely shielded from the interest of the media, the spin of the advisers and the risk of high-profile decisions for a party career. It is often assumed that this level of backroom policy-making is simply too mundane to hold much interest for politicians, but this is precisely where its value lies. Secondary legislation covers the full gamut of policy-making, offering a window on ‘what happens when politicians are silent as well as when they speak’ (p.19).

Overall, Page finds that the tendency for politicians and their auxiliaries (advisers and political appointees) to be involved actively in legislative development is higher than he had anticipated – 40 per cent of the decrees he studied demonstrated the active involvement of politicians, even if this engagement was not always strategic or sustained (p.148).  He finds that even where politicians do not intervene directly in secondary legislation, mutual adjustments take place between politicians and their advisers. These may be sporadic, non-conflictual and even tacit, but taken together, they can have a notable impact on the finished article.  Perhaps surprisingly, secondary legislation also emerges as a potential space of contestation where the political stakes may be high.  Far from dreary routine, major partisan initiatives with the potential to generate intense opposition may be channelled through executive orders (p.19).  I wonder if this (ab)use of secondary legislation is set to become more common in an era of governance by stealth? The finding echoes the recent high profile ‘Poundland’ case, where Iain Duncan Smith, UK Minister for Work and Pensions, rushed retrospective emergency legislation through Parliament in order to defuse a court ruling that had found against government employment schemes requiring jobseekers to work unpaid or have their benefits cut.

‘Turning to the bureaucrats, Page finds some evidence for the cultural character of bureaucracies (see, for example, Crozier, Hood and Lodge).However, there is little to support the assumption, common in public choice approaches, that civil servants have their own agenda which invariably conflicts with that of their political masters and will set out to ‘shirk’ or subvert the politicians’ will to further their own interests.  Far from seeking to exploit potential policy controversies that might embarrass their political masters, bureaucrats generally alert their politicians to controversial issues and keep them informed about the progress of non-controversial matters (pp.151-2).  All this is in line with a ‘logic of appropriateness’ involving socialised conventions on courtesy and procedural correctness.

Page demonstrates his skill as a comparativist both in his exemplary research design and in the way he constructs his analytical findings. For example, he classifies cases of political involvement in the development of a decree as: directed bureaucratic policy-making (cases of active political engagement resulting in substantive impacts on existing policy); undirected bureaucratic policy-making (where civil servants operate independently of politicians, or under indirect instructions); consequential policy-making (where civil servants operate independently, but where any discretion is pre-empted by prior decisions or decisions of other authorities); and the largely academic category of ceremonial policy-making, where there is active politician involvement but no policy deliberation takes place, for example, legislation produced to cement cross-national diplomatic initiatives (pp.148-51). More significantly, he crystallises the contribution made by civil servants to democratic governance as follows: they routinize public policy, ensuring that policy processes are legitimate and consistent with an existing ‘acquis’ of policy measures; they regularise policy to ensure the legal integrity of the measure; and they suggest improvements to existing policy to effect policy adjustment (pp.168-171). These and his other findings, based on rigorous inductive research, will serve to guide future scholars in many fields of public policy.

Overall, this book will delight comparativists for its methodological integrity; policy researchers and practitioners for its faultless rendering of a complex and reciprocally demanding relationship; and the general reader for the extraordinary way in which it reveals the red-blooded politics in the quiet world of secondary legislation.  To quote our students: ‘Who knew?’

Patricia Hogwood – University of Westminster
Patricia Hogwood is Reader is European Politics at the University of Westminster.  She has published on UK devolution and EU policy-making in a comparative context. Her other research interests include EU immigration policy and the externalisation of internal security and the impacts of German unification on German identity, democracy and public policy.