Policies aimed at encouraging the take-up of green cars may have unexpected results on both emissions and markets.

Policies aimed at encouraging the take-up of green cars may have unexpected results on both emissions and markets.

Road transportation currently contributes to 19 per cent of CO2 emissions in Sweden, a figure that is higher than the EU’s average. From 2007 to 2009, the Swedish government put in place a Green Car Rebate to encourage people to buy lower emission cars. Cristian Huse and Claudio Lucinda assess the effectiveness of the policy, finding that while it did reduce CO2 emission levels, there was also little need to subsidise the purchase of vehicles that can use both petrol and alternative fuels.

Policymakers worldwide face the challenge of designing efficient environmental policies. To do so, besides navigating the waters of politics, they need to account for the consequences of regulation in great detail. That is how consumers and firms are likely to react to a policy and, with increasing importance, how technologies are affected by regulation and how they in turn shape its outcomes. In our study, we examined such issues by looking at the Swedish Green Car Rebate (GCR), an environmental policy applied to the new car market. We found that this rebate did lead to a reduction in lifetime CO2 emissions, though this was in the context of ‘green’ cars already having a substantial market share in Sweden.

The importance of road transportation cannot be understated, as it is responsible for 20 per cent of the CO2 emissions generated by fuel consumption worldwide. Moreover, with the growth of emerging economies, the number of passenger cars is set to double to almost 1.7 billion worldwide by 2035. Within the EU, passenger cars are responsible for about 12 per cent of the overall emissions, but this share is a much higher 19 per cent in Sweden, as its car fleet has average CO2 emissions lower only than those of Estonia and Latvia within the EU 25 countries. Reducing emissions from passenger cars is thus essential for Sweden to meet EU-wide environmental goals. In practice, this essentially involves raising fuel taxes, increasing fuel economy standards of the means of transport and/or investing in alternative fuels and transportation technologies.

The GCR (in place from April 2007 to June 2009) is one of a number of policies designed to incentivize the purchase of fuel-efficient vehicles amid the ever growing concern with emissions and the quest for oil independence. It consisted of a 10,000 SEK (about $1,400) rebate paid to private individuals purchasing new environmentally friendly (“green”) cars. Two features distinguish the GCR from policies elsewhere. First, the GCR was broad in that green cars already commanded a 25 per cent share of the new car market in 2008. Second, the GCR relies on alternative (renewable) fuels to achieve its aims, likely due to the Brazilian success with ethanol and to get the Green Party onboard.

The GCR defined a green car, and thus eligibility for the rebate, according to which fuels it is able to operate on and on how much CO2 it emits. Those able to run only on fossil (“regular”) fuels had to emit at most, 120g CO2/km, while those able to run on alternative fuels (mostly ethanol) were given a more lenient treatment roughly equivalent to 220g CO2/km. As a result, 54 among the 120 green cars marketed in 2008 were alternative ones and two-thirds of the new green cars registered in 2008 were able to operate using renewable fuels. Among these, the dominant ones are FFVs (flexible-fuel vehicles), which seamlessly operate using any combination of ethanol and petrol.

We estimated an economic model for the Swedish car market and evaluated three counterfactual (what-if) scenarios to examine the effects of the GCR on CO2 savings as well as on brands and fuel segments market shares. This allowed us to evaluate the role of the skew towards renewables and how the program affected different car manufacturers. In the first scenario, we assessed the overall impact of the GCR by considering a scenario with no policy. Next, we addressed what would have happened had regular and alternative fuels been treated the same way by letting only vehicles emitting at most 120 gCO2/km be classified as green cars and thus qualify for the rebate. One immediate effect of such a symmetric policy is that since no single FFV emits less than 120 g CO2/km, none qualify for the rebate.

Finally, we examine what would have happened had all carmakers decided to turn their captive petrol cars into FFVs to benefit from the program. Although arguably extreme, this scenario is consistent with what has happened in the Brazilian market in the mid-2000s, where all major carmakers decided to phase out petrol vehicles in favour of FFVs. This scenario thus stresses a potentially perverse effect of the program whereby ‘too many FFVs’ would qualify for the rebate and increase the total cost of the program, without necessarily using ethanol. 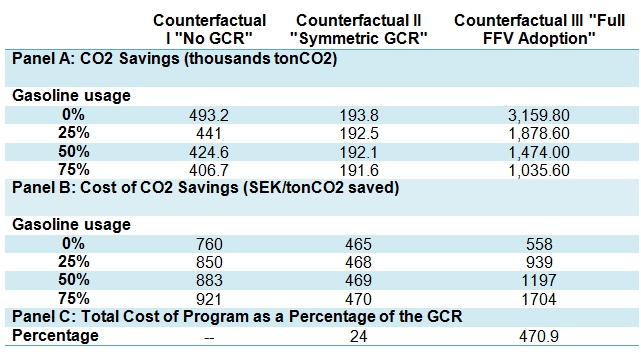 Note: This table reports the total cost of the program in each scenario in Panel A, lifetime savings in tons of CO2 emissions induced by the different counterfactuals in Panel B and their associated costs in SEK/tonCO2 in Panel C. Results are reported for the assumption of Bertrand-Nash pricing as well as different levels of gasoline usage among FFV owners to illustrate the impact of fuel arbitrage on the program. All computations assume the lifetime of a vehicle to be 15 years.

As Figure 1 above illustrates, on the environmental front, the GCR resulted in a 493.2 thousand ton decrease in lifetime CO2 emissions, for the vehicles sold during the period in which the policy was in place, with a cost of 760 SEK/tonCO2 ($109), thus typically lower than estimates for the US market yet higher than the price of European emission permits and the social cost of carbon. Accounting for the fact that a substantial share of FFV car owners switched to the cheapest alternative between petrol and ethanol, results in non-trivial cost increases. For instance, if petrol usage among FFV owners is 50 per cent, CO2 savings decrease by 14 per cent, and the costs for these CO2 savings reaches 883 SEK ($126). That is, the FFV technology makes fuel choice an additional dimension to be taken into account by regulators in policy design. Removing the asymmetry of the GCR (Counterfactual II) would result in lower CO2 savings but also a lower cost. Importantly, since such a policy would no longer cover FFVs, fuel switching does not affect the cost of the policy.

Finally, in a scenario where carmakers were to fully replace their captive petrol models with FFVs (Counterfactual III), CO2 savings would increase substantially, but at a high total cost for the taxpayer: this alternative policy would result in a roughly fivefold cost increase as compared to the GCR. When compounded with fuel switching, its cost could easily increase over 35 per cent as compared to the actual policy.

On the market front, the first scenario highlights that high-emission vehicles, especially those running on petrol, suffered an ever increasing competition from fuel segments benefiting from the GCR, as shown in Figure 2 below which illustrates the difference in the market share for various fuel segments if there had been no GCR. The main brands losing out from the policy were Swedish carmakers Volvo and Saab as well as (high-end) German carmakers, all of which have a strong presence in the high-emission petrol segment.

Figure 2 – Changes in fuel segment market shares under no GCR 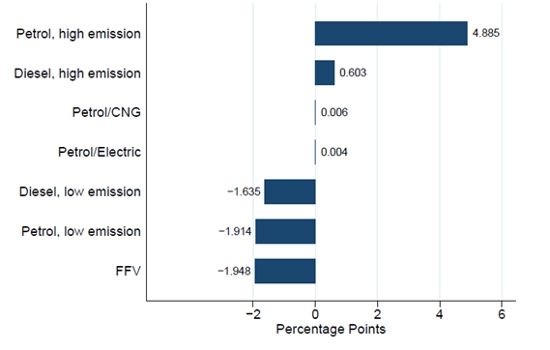 A symmetric version of the GCR would make Saab and high-end German brands better off as compared to the actual policy. Importantly, the market share of FFVs would decrease by less than 0.4 percentage point (from 14.1 to 13.7 per cent) as compared to the GCR, which suggests that consumers would have purchased FFVs regardless of the policy.  This suggests that the skew towards renewables – which was an essential part of the GCR – would not have been necessary and the FFV technology would not need to be subsidized to attract consumers.

Finally, full conversion to the FFV technology would result in higher market shares for Swedish and high-end German brands as compared to the actual GCR, at least partially restoring market shares lost under the GCR. This finding once again shows how the FFV segment carved market share at the expense of high-emission petrol vehicles.

In assessing a unique policy skewed toward renewables and which affected a substantial share of the new car market, our findings highlight the tensions between the different margins of consumer choice and the role of technology in environmental and trade policy design. Policymakers need to take into account the technologies in use in the markets they are regulating. This issue is to become ever more important as more alternative technologies, e.g. hybrid, multifuel, are brought to market in the coming years.

This article is based on: The Market Impact and the Cost of Environmental Policy: Evidence from the Swedish Green Car Rebate (forthcoming).

In their row over gas prices, Russia has no reason to make concessions to Ukraine. There is little to suggest that an end to the conflict is in sight.