The Czech Republic held parliamentary elections on 25-26 October. Seán Hanley provides an overview of the election, which saw a disappointing result for the Czech Social Democrats (ČSSD), who received the largest number of seats, but fell well short of their target of 25 per cent of the vote. The real winners were a new party, ANO2011, who greatly exceeded expectations and only narrowly finished behind the ČSSD. The result leaves a fragmented party system, with ANO’s leader Andrej Babiš, and Czech president Miloš Zeman now arguably the country’s two most powerful figures.

As was widely anticipated, the Social Democrats (ČSSD) won the Czech Republic’s legislative elections on 25-26 October, emerging as the largest party with the near certainty of returning to government after two terms in opposition. However, rather than leading to champagne corks popping, the result triggered bitter recriminations within the party and an immediate attempt to topple the party’s leader. Opponents of the ČSSD chairman Bohuslav Sobotka, backed by president Zeman, wasted no time in using their majority on the party executive to call on him to resign and summarily removing him from the party’s government negotiating team.

Despite ‘winning’ the election, the 20.45 per cent the Social Democrats polled fell disastrously short of the party’s 25 per cent target vote – let alone the 30 per cent that seemed to be easily within reach at the start of the campaign. It was also the party’s lowest vote in elections to the Czech parliament since 1992, when it was still a marginal force led by elderly former exiles, rather than a serious party of government. Ominously for the party, it was also the second successive election in which its vote had fallen steeply. The Chart below shows the share of the votes each party received in 2013 and the last election in 2010. 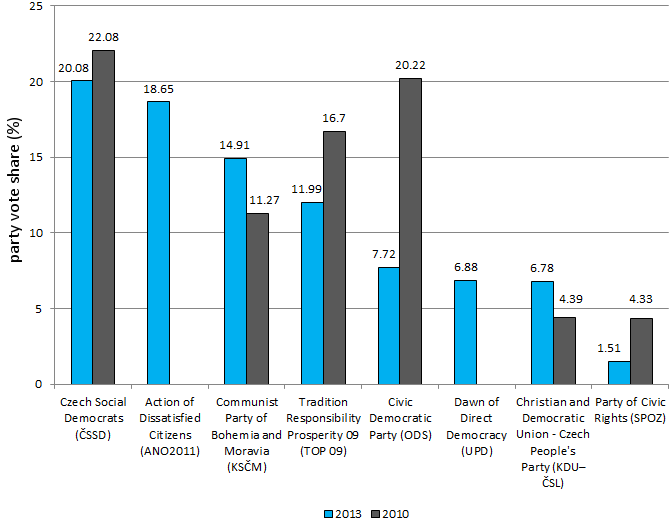 No fewer than seven parties will be represented in the new parliament, which was elected on a low turnout of 59.48 per cent and saw two new anti-establishment parties break through. The first of these was the Dawn of Direct Democracy (UPD) movement led by Czecho-Japanese entrepreneur Tomio Okamura, which polled 6.88 per cent.

However, the clear de facto winner of the election was a second new party, the anti-corruption movement ANO2011 founded by the agro-food billionaire Andrej Babiš. With 18.65 per cent of the vote, Babiš’s new movement exceeded even the most optimistic poll forecasts, topping the poll in many Czech regions and coming in second nationally – the best performance by any new party since the Czech Republic became independent in 1993. With 47 deputies in the 200 member lower house – only three fewer than the Social Democrats – ANO2011 also holds the balance of power and its choices will be instrumental in the formation of any future Czech government. The Table below shows the distribution of seats. 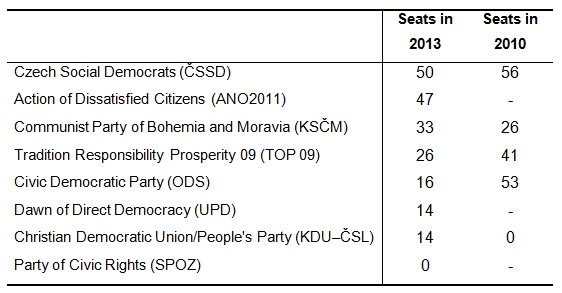 ANO2011 could theoretically form a bare majority government with the three traditional parties of the Czech right in parliament: the Civic Democrats (ODS) and TOP09 both survived as a much diminished parliamentary grouping, while the Christian Democrats (KDU-ČSL) re-entered the legislature after narrowly clearing the five per cent threshold. Babiš’s status as one of the Czech Republic’s super-rich makes him an unlikely ally of the left. Moreover, in the election campaign his movement tacked politically to the right in a successful attempt to win over discontented former voters of the ODS and TOP09.

However as Kevin Deegan-Krause has noted, these days party-political differences between left and right in the Czech Republic seem to matter far less than those between old and new, especially when the old are also recent incumbents. Andrej Babiš was therefore adamant that his movement – which presented itself as a team of practical non-politicians taking on the establishment – would never work in government with two parties he saw as a byword for corruption.

Before the election, Babiš had also ruled out helping the Social Democrats into office, citing political differences with the party over tax, and explaining that his movement would help pass good laws in opposition rather than share responsibility in government. The post-election arithmetic, however, upset both his plans and those of the Social Democrats, who had dismissed ANO2011 as a ‘commercial party’, forcing the billionaire and the main party of the Czech centre-left into an unlikely embrace.

The Social Democrats’ disastrous electoral under-performance will prevent the once assured fallback option of forming a minority government with the support of the hardline Communists (KSČM) from taking place. While the KSČM polled a respectable 14.91 per cent, the Communists’ and Social Democrats’ combined total of 83 legislators is well short of the 101 votes needed for a parliamentary majority.

Babiš’s vision of playing the role of a semi-constructive opposition from the parliamentary side-lines was, however, also unsustainable. Such was his movement’s success, that the only government line-up which would be both politically viable and capable of generating a parliamentary majority would be a three-way agreement between ANO2011, the Social Democrats and the Christian Democrats – a traditional ‘pivotal party’ in Czech coalition-making.

Despite disagreements on tax, pensions and the minimum wage, ANO2011 and the Social Democrats are not impossibly strange bedfellows. Closer reading of the two parties’ programmes shows shared commitments to reducing VAT, scrapping healthcare charges and instituting a new round of anti-corruption measures. Both Babiš and Social Democrat leaders quickly conceded that grounds for a potential deal did exist, although it was unclear whether ANO2011 would enter a formal coalition or agree only to back a minority Social Democrat-Christian Democrat administration as an external support party.

Negotiations were nevertheless brought to an abrupt halt by the Social Democrats’ post-election descent into factional infighting. Rebels in the party led by deputy leader Michael Hašek appear to have overplayed their hand in trying to defenestrate Social Democrat leader Bohuslav Sobotka, resulting in an acrimonious and divisive power struggle.

The Social Democrats will settle who holds the top job when the party’s wider leadership meets on 10 November. But with the party’s deputies split down the middle, regardless of the formal outcome, there seems a real possibility that the Czech Republic’s one remaining credible party of government could begin to break apart. Such fragmentation can only add to the influence of president Miloš Zeman. Zeman was easily able to shrug off the humiliating 1.5 per cent vote received by the small pro-presidential party SPOZ and, even if his preferred ČSSD faction comes off worse, he retains a strong position as head of state.

As president, Zeman chooses a prime minister designate and may constitutionally nominate whoever he wishes. However, he may be in no hurry to do so. The Czech Constitution sets no time limit for the nomination of a prime minister and Zeman may prefer to see how the situation develops before making a move. He already enjoys de facto control of the government through the technocratic caretaker administration which he imposed in June and which continues to run the country as a ‘government in resignation’.

The unstable situation also presents an opportunity for Andrej Babiš. As with Zeman, Babiš’s strategy is to gain leverage over government without having direct governmental responsibility. However, he faces rather tougher challenges. Despite his deep pockets, he may struggle to hold together a movement with no clear unifying ideology and an inexperienced parliamentary group whose members are largely political unknowns. He may also find it difficult to resist pressures to play a more direct role in government, potentially opening him up to the same mix of anti-political protest and social frustration that undermined earlier governing parties.

But Babiš and ANO2011 may be more than a passing phenomenon. As Nicole Bolleyer highlights in her recent book on the trajectories of new parties in Western Europe, while most ‘flash’ parties quickly imploded after initial success, some – those with determined, organisation-building leaders – do not. The first pattern is illustrated by the fate of the reformist outsider Public Affairs (VV) which collapsed in scandal and dissension  less than a year after its breakthrough in the Czech parliamentary elections of 2010.

Available evidence suggests that in the two years since founding ANO2011, Babiš has invested considerable time and resources in precisely such organisation-building. With the eclipse of the traditional parties of the Czech centre-right – and the electoral debacle suffered by the conservative Eurosceptic ‘Heads Up’ bloc endorsed by ex-president Václav Klaus (0.42 per cent) – Babiš may find opportunities to build his movement by making it the focus for the integration of right-wing forces.

It is not inconceivable that future political competition in the Czech Republic may take the form of a clash between a tycoon who owns his own political party, and an unpredictable president intent on putting his own stamp on the political system.

Something rotten in the state of Czechia?