The Council of the European Union has often been criticised from the perspective that it lacks transparency in its decision-making. James P. Cross assesses the censorship of Council records in the period since transparency legislation was introduced in 2001. He notes that while transparency has increased during this period, censorship of Council records is much more common in areas with high levels of controversy and disagreement between national governments. The fact that compromises may be easier to achieve in ‘closed doors’ negotiations means that there is a trade-off between establishing maximum transparency and increasing the efficiency of the decision-making process.

The Laeken Declaration states that: “[T]he European project . . . derives its legitimacy from democratic, transparent and efficient institutions.” Negotiations aimed at revising EU transparency legislation (Regulation 1049/2001) began in 2008, but since December 2012 are at an impasse. These negotiations are important because the outcome will govern how the public can access records relating to the EU’s legislative process when it comes into force. The current impasse exists because of significant inter- and intra-institutional disagreement between the Commission, Council and Parliament about how transparent the legislative process should be and how the process of record release should be governed.

Given the importance of this legislation for the democratic process and the fact that negotiations for reforms are on-going, it is useful to assess how legislative transparency has developed since the introduction of the original transparency legislation in 2001. One way in which that can be done is by assessing how records have been released to the public by the Council of the European Union over this time period.

The first thing to note about transparency in the Council is that the current picture is much improved in terms of access to legislative records compared to the secretive and highly censored days before the introduction of the 2001 transparency legislation. Figure 1 shows the proportion of records pertaining to legislative proposals put forward by the Commission between 1999 and 2013. The figure graphs the proportion of records partially released or not released over time. A partially released record is one that has been released on the Consilium database, but in redacted form, while an unreleased record is one that has not been released to the public. 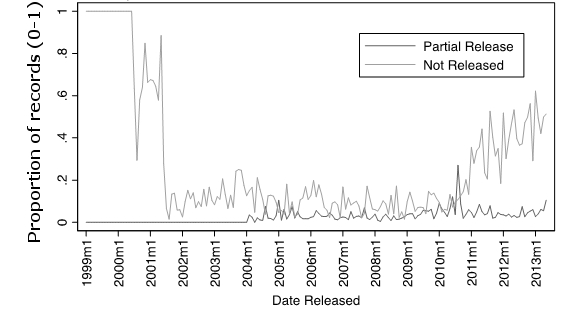 Note: Records enter time series on the date they are archived. There is usually a delay between the date a record is created and the date it enters the Concilium database.

As can be seen, there is a large decrease in censorship that can be attributed to the introduction of the 2001 transparency legislation. There is a clear decrease in full censorship from mid-2000, with an increase in censorship observed from about mid-2010. This increase in the later part of the time series can be attributed to the fact that negotiations for many proposals are still on-going, so records have not yet been released. The occurrence of partially released records begins in 2004 and has been relatively steady over time.

When one delves a little deeper into Council transparency however, a slightly more nuanced picture emerges. Figure 2 demonstrates the effects that controversy and disagreement during negotiations have on the probability that a record shall be censored. It shows that as levels of controversy increase for a particular negotiation, we observe an increased probability of both types of censorship in the Council. This suggests that conflict during negotiations leads the General Secretariat, which is tasked with releasing legislative records, to apply censorship. This is presumably to protect the integrity and efficiency of the decision-making process.

Figure 2: Effect of controversy on probability of censorship of Council records taking place 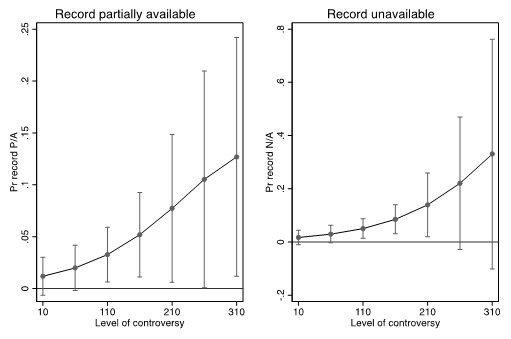 Note: The figures on the vertical axes indicate the probability of a record being partially/completely unavailable. For full calculations see Cross (2013).

The records being released include everything from the Council common positions, Presidency compromise texts and accounts of negotiations in Council working groups. This information (when provided) is very useful to observers who get a detailed picture of how negotiations moved through different institutions and what issues were being discussed at any given point in the negotiation process. This is a clear improvement over the situation before the introduction of transparency legislation in 2001.

On the other hand, one must acknowledge some potential issues arising from the fact that legislative transparency appears to go down when negotiations are subject to more controversy. In many cases, it is exactly these negotiations that observers are interested in, as it is these situations where we want to know how controversy was resolved. Who won, who backed down, what concessions were made by whom to finally break the negotiation deadlock? These questions cannot be directly answered without access to legislative records.

Indeed, when records are not available, we can only rely on the reports of those involved in negotiations to find out what happened, and these very actors can have strong incentives to misrepresent what actually happened in order to protect the efficiency of the decision-making process. What we observe is of course perfectly in line with the transparency regulation introduced in 2001. This legislation outlines a series of exceptions to legislative transparency (in article 4) that are used to justify the non-release of legislative records, despite the fact that it is these very records that the public might be interested in. One of the major exceptions outlined in article 4 is that censorship can be applied if record release would negatively affect the decision-making process. The idea being that it is easier for negotiators to compromise in a closed-door setting, making such a setting conducive to a more efficient decision-making process.

A clear tension emerges when one reflects on the goals set out by the Laeken declaration for “democratic, transparent and efficient institutions”. Careful thought must be given to the balance struck between legislative transparency on the one hand that increases the potential for democratic accountability, and legislative efficiency on the other that relates to finding optimal legislative agreements. The debates surrounding the correct weighting of these two concerns is highly relevant given the current impasse in negotiations to reform transparency requirements in the EU, and any new legislation must reflect the trade-off between transparency and efficiency in order to achieve the goals set out in the Laeken declaration in a coherent manner.

For a longer discussion of this topic, see the author’s recent article in the Journal of European Public Policy