How can European policymakers send credible signals to financial markets? Christian Rauh traces market responses to the announcements and events during the Commission’s nine-year conflict for competences in international air transport regulation. He finds that judicial strategies and European Court of Justice proceedings sent the most credible signals for regulatory change to financial markets, adding evidence to ‘institutionalist’ views of European integration.

It is a truism that the economics and politics of European integration are strongly interrelated. Yet, analysts interested in the relative power of national and supranational actors tend to focus on only one side of this relationship. While the influence of economic preferences on politics drives most modern integration theories, the effects of supranational events on markets hardly meet any attention. However, if political events are driven by economic considerations, then economic responses also reveal information about the credibility of political events.

Of course, economic consequences of day-to-day decision-making in Brussels usually take a long time to materialise and can only rarely be attributed to specific events. Nevertheless, the immediate reactions of financial investors provide a short-term proxy to assess the credibility of political signals for or against European integration. Investors have straightforward incentives to interpret political conflicts ‘correctly’ in order to adapt their investments to the likelihood of regulatory changes. So, who do financial markets think is in charge over the future course of integration?

Analysts of Brussels politics propose widely differing answers. Intergovernmentalists see European integration as a function of national interests. Accordingly, investors should particularly react to signals from the Council of the European Union, since only these meetings reveal information about the pivotal actors.

In contrast, Neo-functionalists argue that the agenda-setting powers of the European Commission are much more important. Especially in partly integrated sectors where spill-overs are likely, early Commission commitments should be credible signals for regulatory change. Finally, institutionalists point to the interplay of actor preferences and institutional opportunities. They predict that moves towards integration are, for example, more likely when the European Commission involves the European Court of Justice (ECJ) to effectively alter the fallback option of reluctant member states.

In a recent article co-authored with Gerald Schneider, we apply these expectations to the Commission’s strive for competences in international air transport regulation. While the internal aviation market had been liberalised in the early 1990s, extra-European air traffic was still governed by bilateral agreements dating back to the Chicago regime of 1944. Under this regime, traffic between any two states is limited to airline operators primarily owned by nationals of the contracting countries.

The resulting multitude of duopolies and oligopolies accounts for the perseverance of flag-carriers and close government-airline relationships all over the world. Nationality clauses constrain market access and imply that ownership changes may entail the loss of indispensable traffic rights. For some companies, however, this regime had the advantage of protecting their networks from more powerful competitors. Airline profitability thus depended very directly on the regime governing international aviation.

In 1998, the Commission initiated judicial proceedings against eight member states, ultimately resulting in an ECJ verdict declaring nationality clauses incompatible with supranational law. In response, the Council agreed to a Commission proposal that opened bilateral agreements to all Community carriers. The 2004 re-regulation created an unprecedented degree of competition in long-haul aviation and paved the way for the ‘Open Skies’ agreement between the EU and the United States of America.

Which of the many strategic moves in this nine-year conflict sent credible signals to investors? We rely on the event study methodology offered by financial econometrics to answer this question. A systematic content analysis of the Financial Times coverage between 1995-2004 partitioned the conflict into 27 individual, publicly visible events. We then analysed whether the daily share price returns of ten European and American airlines deviated systematically from the predictions of a normal return model during these event periods. Statistically meaningful ‘abnormal returns’ are then interpreted as credible political signals.

The results are consistent with the institutionalist approach to conflicts on European integration. We find that judicial strategies, in particular, produced the most pronounced price reactions. The initiation of a formal infringement procedure as well as the Commission announcement to involve the ECJ in 1998 sent credible signals for regulatory change to financial markets. Additionally, we observe the strongest market reactions during the Commission’s self-assured suggestion that the ECJ will follow the demands just two weeks before the scheduled judgement, and particularly during the actual verdict itself in November 2002.

In contrast, most of the early Commission’s agenda-setting moves, as well as the number of consecutive Council responses, did not convey economically meaningful information. During re-regulation, only the political agreement of the European transport ministers in June 2003 resulted in statistically significant abnormal returns; while neither individual Commission statements nor the final signature of the legislative act added any additional information. Taken together, markets tracked the subtleties of European decision-making rather neatly, and especially judicial proceedings credibly signalled supranational power over national opposition.

This is also underlined if we consider the cumulative average abnormal returns (CAARs) an investor would have gained had she held the airline shares only during the covered political events. We distinguish portfolios containing shares of large European carriers (Air France, British Airways and Deutsche Lufthansa), their smaller competitors (Alitalia, Austrian Airlines, Finnair, KLM and SAS) and United States airlines (American and Continental).

The Chart below illustrates that such a hypothetical investor would have realised no meaningful returns during the agenda-setting phase between the Commission’s first demand in March 1995 (event 1) and the submission of reasoned opinions in March 1998 (event 14). Yet, the picture changes dramatically during judicial action. Starting from the ECJ’s advocate opinion (event 18), investors of small European and especially of US airlines would have generated substantial and lasting returns. Again, the confident Commission announcement of the ECJ judgement and, in particular, the verdict itself (events 21 and 22) generated the most substantial returns that did not have to be written off during later stages. Positive returns during the final Council surrender (event 24) persisted only for investors of smaller European carriers. 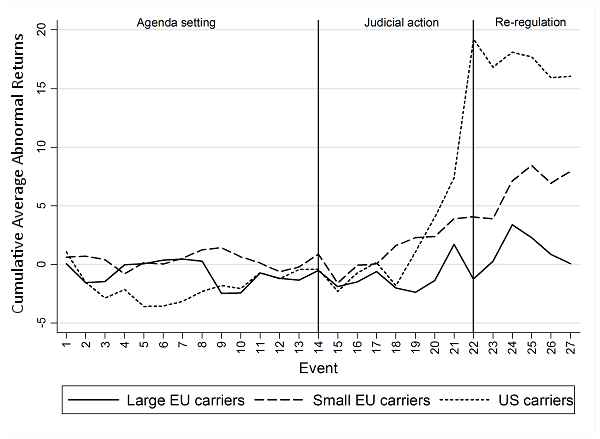 Note: Cumulative average abnormal returns are essentially a measure of how much money an investor would have made (or lost) had they held shares at the time of each of the 27 ‘events’ listed on the horizontal axis: i.e. they highlight the impact each event had on share prices. See the author’s longer article for full calculations.

The figure implies that the final outcome enhanced the anticipated profitability of US airlines with a cumulative gain of 16.04 percentage points above normal market variation, followed by smaller European carriers with an increase of 7.94 percentage points. The portfolio of large European players, in contrast, would have produced no lasting returns. Company specific uncertainties during the final stages of regime change – for example, on British Airways’ exclusive access to Heathrow Airport, the looming merger between Air France and KLM, or Lufthansa’s search for possible acquisitions – may explain this outcome. Thus, distributive effects have to be interpreted with due caution as the competitiveness of individual companies, and thus their preferability of a Commission success, varied over time.

On a more general level, however, the analysis suggests that financial markets carefully consider the signals emitted during political conflicts on European integration. Investors follow the subtleties of day-to-day decision-making and mainly consider those signals relevant in altering the market environment and the profitability of individual firms. Temporarily disaggregated analyses, like the one summarised here, highlight that financial econometrics can shed light on the politics of European integration. In sectors with more easily predictable distributive effects, such as the recent European regulations on food labelling, tobacco advertising or banking, losers and winners of power transfers to Brussels can be identified more clearly and can enable us to evaluate the credibility of different political strategies for or against European integration.