The Eurozone crisis has raised doubts about the rationale which underpinned the creation of the single currency. Tal Sadeh writes that despite early difficulties in accurately quantifying the trade benefits brought about by the euro, recent research shows that it has more than doubled trade among its member states. Moreover, while the Eurozone crisis has created more substantial problems in Southern Europe, the trade benefits derived from the single currency have been disproportionately larger in Eurozone periphery states.

With the sovereign debt of Eurozone member states having spiralled in recent years, and an increasing number of them having required bailouts, critics have pointed to the costs of the euro and raised doubts about the usefulness of a common currency in Europe. Many agree that the reasons for establishing Economic and Monetary Union (EMU) have always been mainly political. However, the economic cost-benefit analysis remains important because it helps shape the political debate by either putting a price tag on the project or showing that it pays for itself.

The benefits of a single currency are expected mainly from expanded trade, following the elimination of exchange rate fluctuations and currency conversion costs and the elimination of pricing mark-ups. Currency unions also reduce the fixed costs associated with international trade and allow smaller firms to participate, thus increasing variety-driven trade.

However, convincing evidence to support these solid theoretical arguments has long been scarce. It was only from the beginning of the 2000s that economists, armed with huge datasets and enhanced computing power, were able to show that a currency union, and by implication the euro, triples trade. This initial finding was met with great scepticism by many, who pointed to problems with the methods used.

First, the large estimates were based on data of many small very poor countries. Since rich countries tend to have diversified economies with long-established trade-supporting institutions and legislation, they are more inclined to trade than other countries. So when European countries are compared with low-trading countries, the euro’s effect on trade is conflated with their idiosyncratic tendency for greater trade. It is therefore important to compare the Eurozone Member States with countries that are as similar to them as possible, such as other OECD Member States, which did not adopt the euro.

Second, the euro’s effect on trade must account for the increase in trade that would have occurred without the euro because of the continued integration in the Single Market. Third, the large estimates were also based on data extending back to the 1950s. Back then, trade levels were lower than today, relative to overall economic activity, less based on variety, more hindered by transportation, communication and logistics costs, and production processes tended to be less globalised. When trade patterns in today’s Europe are compared with trade patterns of the 1950s, the euro’s effect on trade is conflated with globalisation.

Fourth, there were great inaccuracies and distortions in studies of the euro’s effect on trade because they did not properly account for changes in the purchasing power of importing economies and changes in the competitiveness of the exporting countries. As methods improved, successive studies brought down the estimate to no more than a 15 per cent increase, and perhaps even no increase.

However, studies arriving at such low estimates underestimated the euro’s effect on trade because of three other issues. First, few studies accounted for all of the above issues simultaneously, preferring instead to treat them one problem at a time. Second, they did not properly account for trade between members and non-members of the Eurozone. In doing so, they compared trade among Eurozone Member States not only to trade among non-members, but also to trade between members and non-members, which is also stimulated by the euro. In other words, the underestimation resulted from comparing one effect of the euro with another of its effects, rather than with the null case of no effect.

Third, economists so far have ignored the dynamic nature of the relationship between trade levels and the existence of the euro, typically looking for an average estimate across time and Member States. However, consumers and firms may take time to adapt and exploit the possibilities that a new currency can offer, and this adaptation is not necessarily a smooth process. For many, the adaptation only really began ahead of the issuance of the euro notes and coins in 2002.

Even if progress in adaptation would have been steady over time, the euro’s trade effect is sensitive to euro-induced recessions and booms. If Germany was in recession during the euro’s early years because of the common monetary policy, that must have weighed down on the euro’s overall effect on trade. As a result, many studies were simply pre-mature. The euro’s effect on trade cannot be seriously inferred from the experience of just a few years after its launch. New data from more recent years bear the euro’s effect more clearly.

Finally, although less relevant to problems of underestimation, social-political institutions as well as national heritage can cause variations in the euro’s effect in different Member States. If the euro mostly stimulates variety-driven trade, as some have suggested, then it should affect the trade of the different Member States according to the share that small firms make up their production. The Mediterranean economies are especially characterised by small businesses and thus can be expected to gain much from the introduction of the euro. Identifying the trade effects of the euro in the Member States that received bailouts is also interesting, in light of the great efforts to keep them in the Eurozone.

Chart 1: The development of the euro’s effect on trade 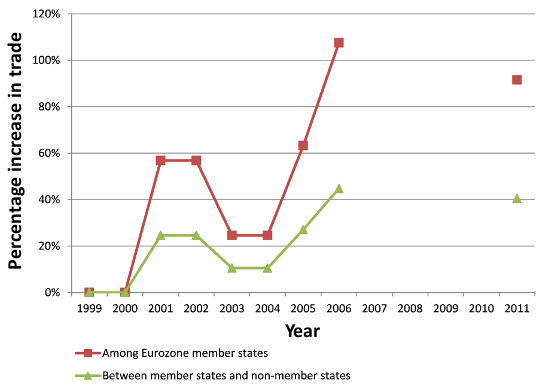 This means that, all else being equal, in 2006 the trade volume between say, Britain and Germany, would have been roughly 40 per cent smaller had the euro not existed. Unfortunately, for technical reasons such a year-by-year analysis is unfeasible after 2006, but the 2011 values represent an average effect for the entire 1999-2011 period, and suggest that the upward trend of the mid-2000s continued at least until the euro crisis hit in 2010, and that whatever deterioration in the euro’s trade effect may have occurred in 2010-2011, it did not offset the gains made during the 2000s.

Chart 2 shows that during 1999-2006 the euro increased trade among the periphery countries of the Eurozone (Greece, Italy, Ireland, Portugal and Spain) more than among its core member states (Austria, Belgium, Finland, France, Germany and the Netherlands).

Chart 2: The development of the euro’s effect on trade by type of Member State 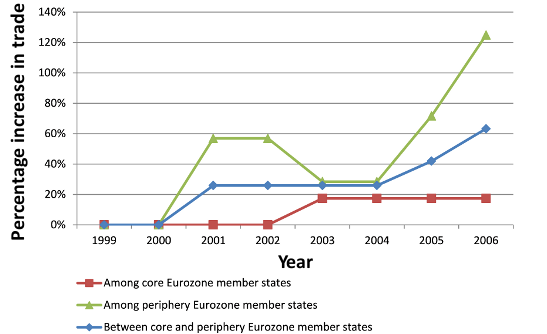 This delayed and fitful progression of the euro’s effect helps explain why it was difficult to detect until now, even with the sounder methods. Overall the evidence suggests that micro-economically the euro works in spite of its macro-economic difficulties, and that in the long run the euro is especially helpful to periphery countries. To the extent that the euro remains a politically desirable project, this evidence strengthens the case for saving it.

Tal Sadeh – Tel Aviv University
Tal Sadeh is Senior Lecturer at the Department of Political Science and Head of the Harold Hartog School of Government and Policy at Tel Aviv University. He is also Co-President of the Israeli Association for the Study of European Integration. His research interests include international political economy, the political economy of the EU (in particular the single currency and EU-Israeli relations) and international institutions and governance structures.