Common wisdom in international affairs is that when democratically elected leaders and governments make threats towards other states, these are credible; voters will punish leaders who do not follow through on their words. New research by Philip B. K. Potter and Matthew A. Baum argues however, that not all democracies are equal in the credibility of their threats of military action. By analysing data on international military disputes over a 35-year period, they find that both an effective and widespread media, and a robust opposition are needed in order for voters to become aware of foreign policy blunders. Without either of these, leaders can avoid following through on their threats with little fear of being punished by voters.

Lately there has been a great deal of debate concerning whether or not democracies are more credible than autocracies when they make demands in the international system. The prior consensus was that democracies are indeed more credible because elections allow leaders to make costly signals that convey credibility. The logic is that potential target states recognise that voters will punish democratic leaders who make public threats and fail to follow through. This makes their signals costly, and hence credible.  However, an increasingly prominent revisionist school has challenged this notion, citing both the absence of evidence in the historical record and problems with the data employed to establish the audience cost finding. In our recent research, we challenge a key assumption underpinning this debate: the idea that all democracies are equally credible.

We find support for these arguments in a series of statistical models, using a variety of measures of conflict, partisan opposition, and media access. Our findings are consistent across our specifications, so a single figure suffices to illustrate the core insight. In this iteration of the model we are assessing the rates of “reciprocation” of all initiated militarised disputes from 1965 to 1999. The idea is that states whose threats are more credible will see less reciprocation of the disputes that they initiate (i.e. the other side will concede). We captured the extent of partisan opposition with a measure of the “effective number of parliamentary parties”, and operationalised media access via a count of the number of televisions per 1000 people. In Figure 1 below, the black curve and confidence interval in the figure represents the rate of reciprocation as television access increases for states with a standard deviation above the mean number of parties (“high party” states). The grey line is the equivalent for states with a standard deviation below the mean number of parties (“low party” states). 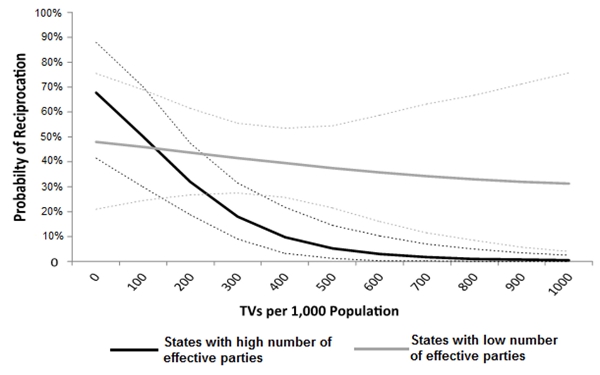 This article is based on the paper “Looking for Audience Costs in all the Wrong Places: Electoral Institutions, Media Access and Democratic Constraint” in the January 2014 edition of the Journal of Politics, and was first published at our sister site, USApp– American Politics and Policy.