Ernst Hillebrand writes at Policy Network that the increase in populism in Western Europe is not a move to the right, but rather a function of growing discontent with the political system. He attributes this in large part to the gradual weakening of the centre-left. In order to encourage more moderate politics, he calls for increased participatory democracy and the promotion of greater inclusiveness and social cohesion.

As Viviane Gravey writes at Ideas on Europe, the question of EU red tape is increasingly prevalent, particularly in the UK. The charge often made, she suggests, is that the UK complies with EU law more than other Member States, creating competitive disadvantages for its economy. She argues that much of ‘EU’ red tape in fact stems from the diversity of transpositions of directives, meaning that the red tape comes from the Member States themselves. One way to address this problem is to make less use of directives and instead adopt more regulations, which are directly applicable across the EU.

Elsewhere, Giles Merritt writes at Project Syndicate that Europe must urgently focus on increasing youth employment. While labour tax reform is good, he says, it will take a long time to have an impact, and the focus should be on underwriting young entrepreneurship and boosting labour market participation through subsidised childcare. He argues that demographic change (particularly an ageing population) is a much greater challenge for Europe in the long term.

Greece’s fate may be a harbinger for the future of the EU, argues Costas Douzinas in an interview at openDemocracy. High levels of public sector cuts and national budget reductions have led to substantial public unrest and the rise of new political parties in the countries of the EU’s periphery. The choice for Greece, he suggests, is between re-electing the traditional parties for more of the same or choosing alternatives, such as the radical left, which would lead to a dramatic shake-up of the national political system.

At European Public Affairs, Robert Langmuir chronicles the trials and tribulations of the EU’s proposed Financial Transaction Tax (FTT). While it will only apply to the 11 countries that signed up to it, the FTT is taking longer than expected and will ultimately be weaker than originally planned. It has faced numerous problems, including a legal challenge from the UK, negative legal evaluations and the complete lack of success for national FTTs (which have resulted in less revenue than expected and dramatic decreases in trade volumes). The final form of the EU’s FTT is not especially clear, but it will likely not discourage risky trading, one of its main goals.

Meanwhile Simon Usherwood writes that the UK’s approach towards the EU has become further complicated by Labour’s recent referendum pledge. Now, both the Conservatives and Labour have promised an in-out referendum on EU membership, simply in different circumstances and under different conditions. He argues that these commitments hinder the UK’s ability to effectively negotiate at the EU level and that both parties have significant problems in dealing with Europe.

Ukraine’s revolution was far from unexpected, writes Richard Heeks at the Manchester Policy Blogs. In his 2013 model of repressive regimes most likely to experience a popular revolt, Ukraine was at the top. He argues that countries with Internet freedom, but little or no political freedom, are most likely to see revolution. While social media has been the main avenue for opposition organisation, both governments and opposition movements can make of use the Internet to lead political action.

Also on Ukraine, Mitchell A. Orenstein at Project Syndicate argues that the IMF’s plan for the country could further undermine its stability. The proposed austerity measures to be taken up in exchange for international financial support could weaken the interim government and make it difficult for a newly elected government to succeed. He argues that political stability is more important than economic ideals, and that such difficult decisions should be taken after the elections, not before.

Last, Judy Dempsey writes at Strategic Europe that German foreign policy faces a challenge in its failure to have any influence on Russia during the Ukraine crisis. With Germany’s emphasis on building diplomatic ties with Russia a failure, Russia is set to lose its best ally in Europe. At the same time, Eastern European NATO members want to intensify security cooperation and support. This shift, with Germany now on board, could finally lead to a more united EU policy towards Russia.

Did you know February 5th was voter registration day in the UK? Neither did many, according to Matthew Flinders in an article at the PSA Blog. He suggests that growing disaffection with politics has led to less voting and public participation. Of particular concern is not just low voter turnout, but the apparent stark socioeconomic divides in the turnout, especially for young people and the less well off. He calls for further education to promote a better understanding of politics and the political system, and to boost civic interest and engagement.

Posted In: Brussels Blog Round up | Uncategorized 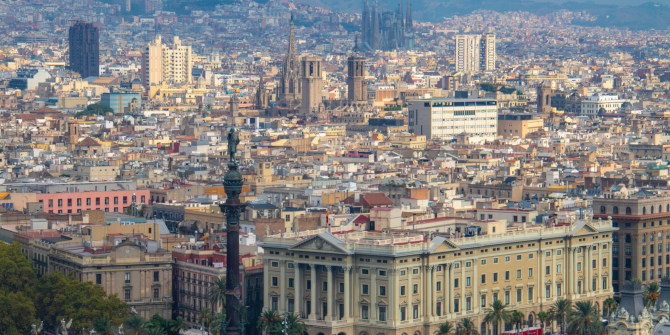