Sweden will not only hold European elections in May, but will also hold national, regional and municipal elections in September. Linda Berg and Jonathan Polk write on the effect this ‘super-election’ year will have on the vote for the European Parliament. They note that while the two largest parties, the Social Democrats and Moderates, will likely have one eye on the national elections, European issues will nevertheless play a substantial role in the campaign.

Twenty years after the referendum on joining the European Union, Sweden’s fifth European Parliament (EP) election will take place on 25 May. Although second-order characteristics – such as lower turnout and larger parties performing worse – are present in Sweden as in other European Union countries, the ‘EU-dimension’ (positive and negative views on Sweden’s EU membership or the EU project) has traditionally played an important role in understanding turnout and party choice for the Swedish EP elections.

Thus it is not surprising that Swedish election studies report that liking or disliking the EU was the top issue motivating vote choice in the first three EP elections. In 2009 this changed. Instead of general EU attitudes, issues such as the environment and downloading/security on the Internet were mentioned as the top motives for vote choice: issues directly connected to EU regulation and competences, and strongly profiled by two parties running successful campaigns in 2009: Miljöpartiet (Greens) and the Pirate Party. It is therefore an open question whether this indicated a shift from a focus on membership per se to a stronger emphasis on the political issues that are handled by the European Parliament.

For 2014, the ‘super-election year’ context is probably the most important feature of the upcoming EP election, and complicates EU issue voting. In addition to the European election, Swedish citizens will vote in national, regional, and municipal-level elections in September, creating a particularly active electoral calendar with overlapping campaigns. When combined with the background of European economic crisis and increased popular right mobilisation, this produces an EP electoral cycle that could go in three distinct directions.

First, the election in May could primarily serve as a warm up for the national election in September, with national politics dominating the campaign and voting. Alternatively, we could see continued highlighting of European parliament politics and issues, such as the environment. Last, we could find increased Euroscepticism, which would again emphasise the EU-dimension. In practice, the 2014 Swedish EP election will most likely feature a mixture of all three.

A dress rehearsal for the national elections in September?

European contests that precede national elections, however, like Sweden in 2014, tend to feature more attention and active campaigning from political parties, but this is driven by competition for national office. A poor showing in an EP election just a few months prior to the national election makes for an inauspicious beginning to the national campaign, and party leaderships know this. Both the Social Democrats and the Moderates (Sweden’s two largest parties) will therefore put much more time and resources into campaigns compared to previous EP elections, but the main emphasis for both parties will be unemployment and jobs.

Competition for national office will loom large in May, but even if left-right politics features more prominently in the EP campaign of especially the two largest parties, it is likely to do so with a European angle. Social Democrat strategists indicate that the party will emphasise the need to safeguard the rights of all workers in Sweden, regardless of citizenship, including posted workers and EU-citizens. The Moderates, for their part, plan to focus on the internal market and free movement, arguing this is good for companies and will create new jobs for Sweden, a small country that needs to export. Vänsterpartiet, the Left Party, has a distinctively left-wing stance on economic issues that appears to play well with subsections of the electorate, spilling over into EP polls at the moment.

Two of Sweden’s most pro-EU parties were moving in opposite directions in the country’s first European Parliament opinion poll in February. As proponents of an open EU, the Miljöpartiet, Sweden’s Green party, received 15.7 per cent support in the poll, almost 5 per cent more than its 2009 EP vote share. The Greens focus on particular issue areas of EU competence, such as the environment and immigration. Their strong profile on EU-level issues and early EP campaign appear to have helped the party in this preliminary poll. On the other hand, the liberal Folkpartiet (Liberal People’s Party) is enthusiastically pro-EU, and argues that increased integration will benefit peace and prosperity and serve as a bulwark against nationalist sentiments. In the first EP election poll in February, Folkpartiet polled almost three points below its 2009 vote share, but the party has since announced that Marit Paulsen, one of the most popular EP candidates, will be running again in 2014, which might attract more voters.

At the other end of the continuum, the Sweden Democrats, the anti-immigrant populist party, plan to run a more Eurosceptic campaign, especially targeting what they see as the negative effects of free movement: poor EU-citizens begging on the streets and the cost of membership. The party did not gain EP representation in 2009, but entered national parliament in 2010. It is likely that they will enter the EP in 2014, particularly since the party receives even higher support in combined national election polls. The Table below shows each party’s predicted vote share and seats based on the latest EP poll (in February). 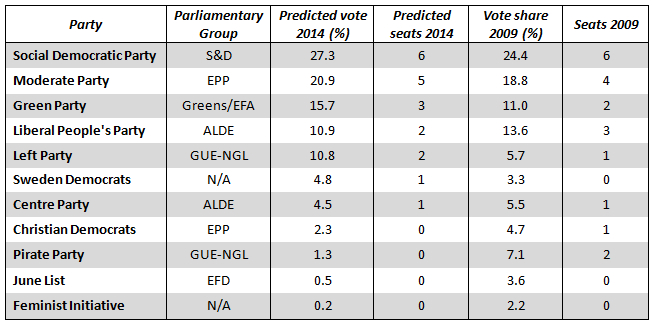 The Social Democrats and Moderates are preparing for more nationally focused left-right campaigning from now until September. In contrast, the Liberal and Green parties, as well as the Sweden Democrats, see the EP campaign as distinct from national competition. For this latter group, May campaigning will be characterised by EU politics – either as issues for the European Parliament or the overall raison d’être of the EU.

The situation is more troublesome for the Christian Democrats and the Centre Party. Both received lower levels of support in the February poll compared to the 2009 election, and run the risk of losing representation (Sweden has a four per cent threshold). As both parties’ campaigns accentuate ideas of ‘a narrower but sharper EU’, an EU that should allow for more national self-determination (whilst still endorsing the overall idea of the EU), they end up in an ‘in-between’ position compared to other parties with clearer stances. In combination with decreasing support in the national polls, their position is tough at the moment.

The multitude of smaller parties competing further complicates the situation for the Christian Democrats and Centre Party. The Pirate Party will try to repeat its 2009 success and not follow the pattern of the June List, which entered the European Parliament in 2004, but failed in 2009. The Feminist Initiative is another small party competing in the election, having secured 2.2 per cent of the vote in 2009. Despite small and new parties tending to do well at EP elections, so far none of these attract much support in 2014. However, this is only the first poll and official campaigning has not yet begun. If there is one thing we know, EP elections tend to surprise, with one party or another performing much better than indicated by the polls.