The conflicts in Iraq, Syria and Ukraine have been accompanied by calls for intervention from foreign countries. One possibility for this form of intervention would be a peacekeeping mission of the kind conducted by the UN in Bosnia during the 1990s, but do such missions actually have the capacity to stabilise conflict-torn regions? Using data from the Bosnian war, Stefano Costalli writes on the effectiveness of peacekeeping operations. He notes that peacekeepers were generally deployed in the areas in Bosnia which had the highest levels of violence, but that the response was largely reactive and often suffered delays. Ultimately there was no link between the deployment of UN peacekeepers and an actual reduction in violence.

Does peacekeeping work? To what extent and in which cases? Several cross-country empirical studies have found that peacekeeping seems to help stabilise conflict-torn countries, decreasing the likelihood of recurrent conflict. However, some contributions find that peacekeepers seem to have little effect on reducing the risk of renewed war if they intervene in ongoing conflicts.

Recent literature on civil wars has shown that such conflicts are best understood by taking into account local-level issues and variation, both to explain their outbreak and the use of violence by the warring groups. So far, however, there has been little attention paid to the local dimension in peacekeeping missions. If we accept that the causes of violence are often local and conflicts often vary considerably within countries, then a disaggregated approach is essential to investigate the effectiveness of peacekeeping missions in civil wars.

Thinking about Bosnia-Herzegovina and peacekeeping, the memory goes back to the infamous episode of Srebrenica, but there is much more than this. Thanks to the availability of high quality disaggregated data, the Bosnian case is particularly suitable to study the problems peacekeeping missions have to face when intervening in a major civil war and to what extent peacekeeping works in such a context. In my assessment I look at two main questions: whether the peacekeepers actually went where they were most needed and whether they managed to reduce violence in the areas where they were present.

A mission has barely begun once troops reach a conflict-torn country. We cannot take for granted that the troops automatically go where they are most needed, as a series of difficulties may prevent this. During ongoing civil wars, communication can be difficult; roads can be interrupted or controlled by factions unwilling to cooperate with the peacekeepers; the contributing countries might be unwilling to risk their troops in armed clashes. In addition, peacekeeping missions are often undermined by problems such as unclear mandates; fragmented command chains leading to contrasts and delays, and incapacity to develop a wide strategic plan. So far, however, we lack assessments of the overall effect of these issues on the actual deployment of troops.

The Figure below shows the marked spatial variation of violence and UN troop deployment in Bosnia-Herzegovina. The map seems to indicate that the UN troops tended to go to the most violent areas. In fact, the statistical analysis highlights a clear and stable relationship between the location of the most violent areas and the presence of peacekeepers on the ground. In other words, the United Nations Protection Force (UNPROFOR) did not stop in the easy areas of the conflict, but tried instead to address costly human suffering according to the mission and the spirit of the UN. More specifically, peacekeeping presence is robustly linked to civilian victimisation. This result is in line with the mandate provided by the UN Security Council, which was mainly focused on providing aid to civilians.

Figure: Map of violence and UN troop deployment in Bosnia-Herzegovina (1992-1995) 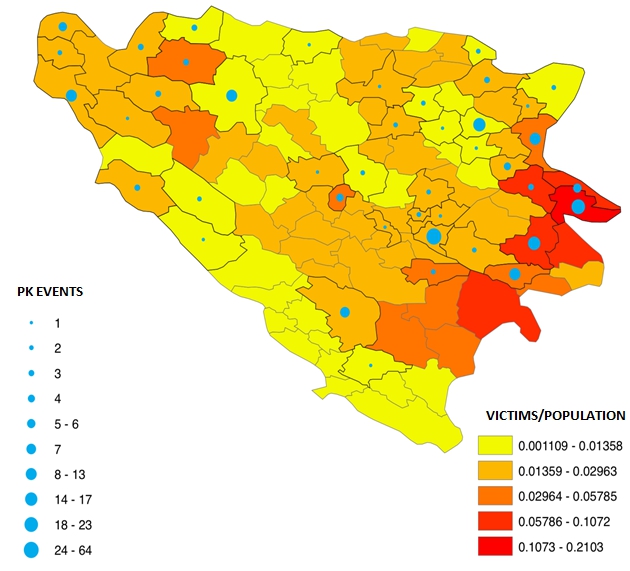 Note: The map shows the number of peacekeeping events (PK events) in each location between 1992 and 1995 relative to the level of violence in each area (the darker the colour of the area, the greater the ratio of victims of violence to the population).

However, the map cannot show us the temporal ordering of violence and troop deployment. Taking into account variation over time, we see that the peacekeepers react differently to the dynamics of violence as time goes by. In the first three years of war, the troops of UNPROFOR intended to intervene where violence was particularly intense, but reached those areas with considerable delay. Severe violence in the previous (not the same) year is the crucial determinant of their presence.

In 1995, instead, the situation changes: the variable that exerts a relevant impact and triggers UN presence is the level of violence recorded in the same year. The change in the ‘reaction time’ of the peacekeepers was mainly due to a reorganisation of the Bosnia-Herzegovina Command of UNPROFOR operated in 1994. Two brigade-sized-sectors were created together with a new Logistics Support Group and UNPROFOR’s mobility capacity was also increased.

Hence, the peacekeepers generally went to the most violent areas. This can be considered an achievement of the mission, given that the mandate was unclear, changed repeatedly and the troops were under multiple pressures. However, this ‘local violence-driven approach’ constitutes one of the weaknesses of the peacekeeping action in Bosnia. Given the clearly ethnic features of the conflict, I expected a higher probability of UN troop-intervention in the more ethnically divided areas, since this kind of information was available at the time of the war. However, the empirical analyses find no support for this over the four years of the war. The only strong determinant is the level of violence. Other issues linked to the local context did not seem to have any influence on deployment decisions, suggesting the absence of a strategic plan. As General Smith says, all operations were tactical operations.

What was the effect of peacekeeping on the level of violence?

This is a crucial issue in ongoing conflicts. My analysis shows that the impact of UNPROFOR on the severity of violence was irrelevant during the war. Neither the simple presence nor active initiatives of the peacekeepers on the ground were able to substantially reduce the intensity of violence in the Bosnian municipalities.

Overall, these statistical results help us to put into perspective the fragmented local narratives about the many episodes of intense violence that took place despite the presence of peacekeepers. UNPROFOR did not stabilise the political and military situation, although it delivered food and helped rebuild roads during the war. The presence of the international community has certainly stabilised the political development of Bosnia-Herzegovina after the war, but the UN mission did not affect the intensity of violence during the conflict.

The ineffectiveness of the peacekeepers can to some extent be linked to the remarkable delay that affected their reaction to violence during the first three years of war. Given the long gap between violence and the deployment of peacekeeping forces in an area, the troops were likely to find a situation on the ground that had changed notably from what originally drew the attention of the UNPROFOR command. If violence had already decreased as a result of the military operations and ethnic cleansing, the presence of peacekeeping troops could not make any difference.

However, more structural reasons can also explain the poor performance of the peacekeepers in Bosnia. What happened in Srebrenica can provide some suggestions about possible additional explanations. Shashi Tharoor, then the official in charge of the peacekeeping operations in ex-Yugoslavia at the UN headquarters, claimed in a confidential memo that UNPROFOR was in many areas unable to supply itself, to deter attacks, to defend itself from attacks or even to withdraw.

Both the Bosniak-Croat Federation and the Serbs wanted to finish the issue between them with a fight and the operations of the UN troops in the Balkans were not designed for the effective resolution of that conflict. The constant will to avoid open risks for the UN troops and the insufficient consistency in the use of assertive action played a crucial role. The time gap highlighted in my analysis, and the irrelevance of the other contextual determinants of troop deployment, show that the forces were used in response to events on the ground rather than with a view to attaining a strategic goal. This fact, coupled with a fragmented command chain and communication problems, led to incoherent operations.

Note: This article gives the views of the author, and not the position of EUROPP – European Politics and Policy, nor of the London School of Economics. Feature image credit: Sylvain Liechti (CC-BY-SA-NC-ND-3.0)