The United Kingdom Independence Party (UKIP) won its second seat in the UK’s parliament at a by-election on 20 November in the constituency of Rochester and Strood. Paul Whiteley writes that the victory gives the party national credibility ahead of the 2015 general election, and that a recent increase in the size of UKIP’s membership will improve their ability to effectively target key seats. In terms of the broader picture in British politics, he argues that the division on the right between UKIP and the Conservatives is now much more significant than the division on the left of the party system, even if UKIP are winning discontented working class voters to their cause.

By all accounts the results of the Rochester & Strood by-election were a success story for UKIP. They turned a 10,000 vote Conservative majority into a 3,000 vote UKIP victory, reduced the Labour vote share by more than the Conservatives, and nearly wiped out the Liberal Democrats. The major parties have reacted to the result by trying to make the best of a bad job by managing expectations. David Cameron has been claiming that UKIP’s performance was worse than expected. Labour has dumped a great deal of the blame for their performance on the hapless Emily Thornberry, whose tweet about ‘white van man’ was a serious political mistake. The Liberal Democrats are clearly dismayed by the result and their President Tim Farron has been trying to claim that it was due to tactical voting by their supporters, which is quite a stretch given that the evidence suggests only modest numbers vote tactically in elections.

The build up to UKIP’s success has been coming since at least the last general election, as the chart below shows. It summarises voting intentions for the party in more than 1,600 polls conducted between the general election of 2010 and November 2014. There has been a more or less continuous rise in national support for the party since it took 3.5 per cent of the vote in the general election of that year. There was a bit of a plateau in support after the EU referendum bill, suggesting that the Conservatives did have an impact on Eurosceptic voters with that initiative, but the Rochester by-election will give a further boost to the party in the lead up to the next general election. 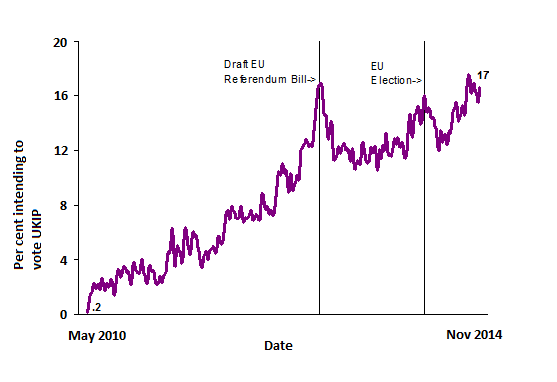 Note: The Chart covers the period from the 2010 UK general election to November 2014.

On the other hand, things have clearly changed in comparison with this earlier period. Firstly, UKIP is winning by-elections rather than just increasing their vote share, and secondly, their increased support since 2010 gives the party national credibility. It is hard to use the ‘wasted vote’ argument against them since, as Nigel Farage has pointed out, ‘if you vote UKIP you get UKIP’. They cannot now be excluded from the television debates in the general election campaign either, and because the Conservatives are in electoral trouble they are going to have to participate in these debates after dragging their feet over them for some time. Equally, UKIP’s recent increase in membership gives them the ability to effectively target key seats in the constituency campaigns in the general election.

Stepping back from the immediate political impact of the by-election to look at the longer-term implications for British politics, the two and a half party system we have lived with in England for the last fifty years has now broken up, following its earlier demise in Scotland and Wales. Ever since Joe Grimond, the Liberal party leader in the 1950s, positioned the party on the centre-left of British politics, the left vote has been divided between Labour, the Liberals and subsequently the Liberal Democrats. The consequences of this division were most dramatically seen in the 1983 general election when the Conservatives took just over 42 per cent of the vote and 61 per cent of the seats, and Labour and the Liberal-SDP Alliance took 53 per cent of the vote and 36 per cent of the seats. The Conservatives now face a new challenge on the right and the Liberal Democrats are increasingly marginalised as the Greens position themselves to the left of Labour. Electorally speaking, the division on the right is now much more significant than the division on the left.

To be fair, Labour clearly has its electoral problems and UKIP is winning discontented working class voters from the party. But nationally UKIP is taking a lot more votes from the Conservatives than from Labour, and in the long run the ideological and policy differences between UKIP and Labour loom large. Many working class Labour supporters may want to leave the European Union, but how many of them want deep cuts in taxation and the welfare state and a system of private health insurance to replace the NHS? The fact that no Labour MPs or Parliamentary candidates have defected to UKIP is an indicator of this ideological divide. Over the coming years the division on the right will be the defining feature of electoral politics in Britain.

Note: This article is provided by our sister site, British Politics and Policy at LSE, gives the views of the author, and not the position of EUROPP – European Politics and Policy, nor of the London School of Economics. Featured image: Nigel Farage, Credit: © European Union 2014 – European Parliament (CC-BY-ND-NC-SA-3.0) 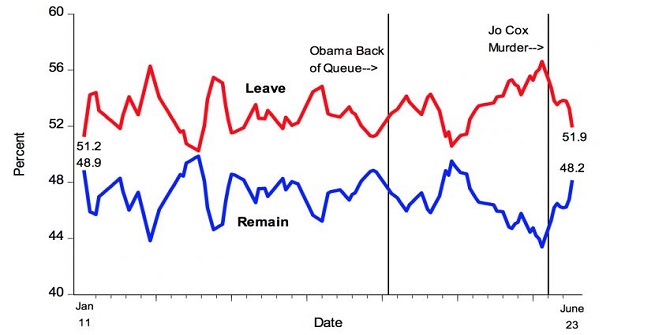