It is often assumed that citizens in states receiving large levels of EU spending are more likely to be supportive of their country’s EU membership. Based on a recent study, Adam William Chalmers and Lisa Maria Dellmuth write that while this principle makes intuitive sense, the reality is more complex. They find that the extent to which citizens already hold a European identity and the level of their political awareness both have a key impact on how fiscal transfers affect support for the EU.

What effect does EU-level fiscal redistribution from rich to poor regions, like the European Structural and Investment Funds, have on popular support for European integration? Supportive public opinion is central for the effectiveness of any political institution, influencing its capacity to compel compliance with the institutions’ aims. For the EU, the question of how to foster support is particularly important in the aftermath of the global financial crisis, as popular dissatisfaction with EU programmes and the integration project as a whole are significant barriers to adopting and implementing EU-level policies to stabilise the monetary union.

In a recent study, we show that fiscal transfers do not increase support directly, as long assumed in existing research. Instead, the effect depends on an individual’s existing ‘European identity’ and political awareness. For all the talk about the importance of redistribution through the EU budget to make public opinion more favourable toward European integration, the effect of redistribution on support may not be in the hands of European policy-makers.

The question of how public support for European integration can be increased has been the subject of a great deal of scholarly attention. Much of this research centres on a theoretical debate between so-called ‘economic theories’ of support, where individual attitudes are determined by a rational cost-benefit analysis of the distributional outcomes of integrative processes, and ‘identity theories’ of support, where individual attitudes are largely a function of social identity. Our argument bridges the gap between these two theories.

We argue that EU support is a function of how distributional outcomes are filtered through the lens of existing individual predispositions, such as identity and political awareness. Fiscal transfers do not simply create economic winners and losers. Instead, transfers may positively affect support for European integration insofar as they signal a form of economic solidarity across people in different EU member states.

However, the ability of individual citizens to interpret financial gains in this manner depends on the extent to which they are already predisposed to doing so. We argue that variation in how individuals interpret the receipt of EU transfers depends on whether they first, are positively pre-disposed to European integration; second, have a capacity to receive and interpret signals of economic solidarity; and third, are exposed to political parties’ communication on supranational redistribution.

Our main finding is that fiscal transfers do not directly affect support for European integration. We tested our argument using a novel data set of EU support in 143 regions in 16 EU member states for the period 2007-2013. An econometric analysis produced three findings.

Figure 1: Effect of fiscal transfers on support for European integration 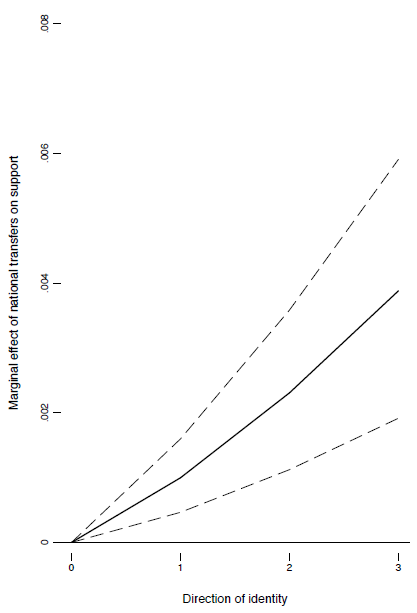 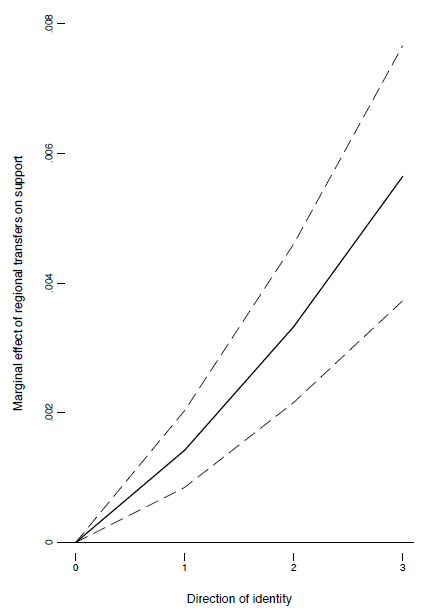 Note: The solid line shows how the effects of redistribution on support varies depending on levels of direction of identity (measuring the extent to which individuals feel that they are EU citizens ranging from 0 (definitely not) to 3 (definitely). The dashed lines indicate the bounds of the 95 per cent confidence interval. For more information see the authors’ longer paper.

Second, an individual’s political awareness increases the effect of transfers on support. We find evidence for one of our indicators for political awareness: better-educated individuals are more likely to be impressed by EU transfers and are more supportive of European integration. Figure 2 illustrates the substantial magnifying effect of education on the relationship between national transfers and support (left hand panel) as well as regional transfers and support (right hand panel).

Figure 2: Effect of education on the relationship between national/regional transfers and support for European integration 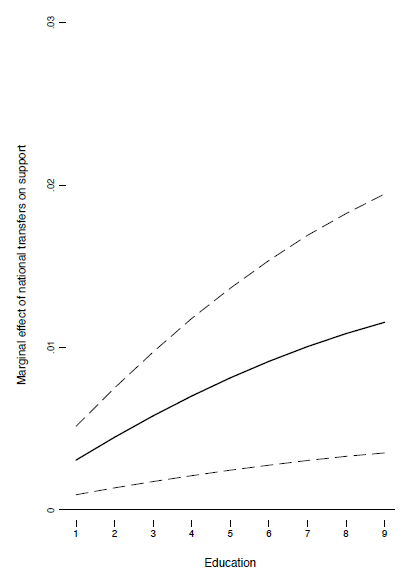 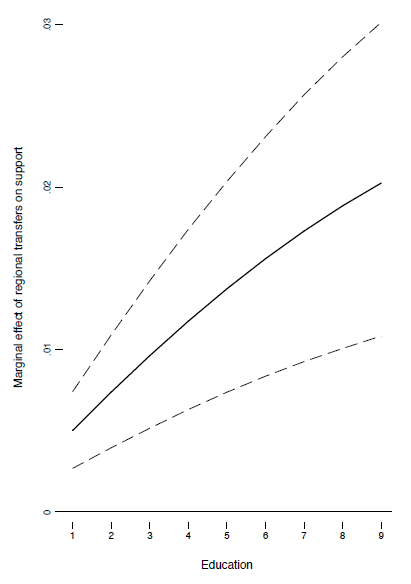 [/fusion_tab]
[/fusion_tabs]
Note: The solid line shows the effects of redistribution on support at different levels of education. The dashed lines indicate the bounds of the 95 per cent confidence interval. For more information see the authors’ longer paper.

Finally, our analysis shows that those individuals who are exposed to national political parties that favour European fiscal redistribution are not more likely to link EU transfers to their support for European integration.

Policy implications: effects of transfers on EU support are not in the hands of EU policymakers

If the effect of fiscal transfers on support is contingent on individual social identity, as our study suggests, then the effect of redistribution on support is not in the hands of European policymakers. Social identity – and therefore European identity – is a relatively stable predisposition. Consequently, it is unlikely that EU policymakers can increase European identity to make transfers more effective in increasing EU support. The key to more effective redistribution through the EU budget appears to be increasing European identity in the long run through other instruments than fiscal transfers.

In addition, our results suggest that fiscal transfers increase support only among the politically aware. This finding stands in contrast to previous evidence of a direct effect on support for European integration from fiscal redistribution among countries. Given that fiscal redistribution to regions amounts to more than one third of the EU budget, this implies that large parts of the allocation of the EU budget proceeds beneath the radar of the public. If the EU is to increase support via fiscal transfers, it will have to work hard at making them more visible, and this will to a large extent depend on the cooperation of the involved partners and policymakers in the member states.

Lisa Maria Dellmuth – Stockholm University
Lisa Dellmuth is Postdoctoral Research Fellow in political science at Stockholm University. Her research focuses on comparative political economy, international relations and public opinion towards international organisations. Lisa’s work has been published in leading EU and IR journals, such as European Union Politics, the British Journal of Political Science, and the Review of International Organizations. In 2012, she received the SAGE Award for Best Article Published in European Union Politics, Volume 13. 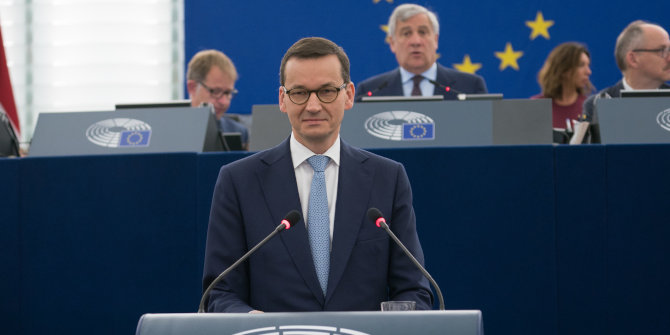