In the last eight months Romania has experienced a surprise victory for Klaus Iohannis in the country’s presidential election, and a major political crisis following corruption allegations against incumbent Prime Minister Victor Ponta. Mihnea Stoica writes that ahead of local and parliamentary elections scheduled for 2016, Romania’s party system is now in flux, with a lack of ideological clarity over the platforms of the country’s two major parties: the National Liberal Party (PNL) and the Social Democratic Party (PSD).

Ever since last November’s presidential election, Romanian political parties have been mired in confusion. The shock victory by the National Liberal Party’s (PNL) candidate, Klaus Iohannis – a relatively unknown political figure prior to the electoral campaign – uprooted many of the beliefs underpinning politics in the country. This was particularly the case given the fact that in contrast to his direct rival in the election, the current Prime Minister Victor Ponta, Iohannis had little visible support from his political allies, many of whom were suspicious to some extent concerning his wider intentions.

Paradoxically, what triggered his success was precisely this: the inability of his opponents to clearly associate him with a political party or a politician who represented the ‘old style’ of Romanian politics. What contributed to him winning the election was not, as has occasionally been argued, his anti-system strategy – which was very mild, since a strong one would have been unrealistic and questionable given his (formal) supporters – but his image as an outsider.

The election brought to light three major issues in particular that have helped throw the country’s politics into flux. Despite imminent local and parliamentary elections scheduled for 2016, badly needed ideological clarifications within the country’s party system have so far failed to materialise. These issues revolve around the power of social media, the role of politically sensitive topics in election campaigns, and the ‘myth’ of leaders as something approximating ‘political heroes’. All of these factors will play a role in shaping the chances of electoral success in 2016 for the two major parties: the PNL and the Social Democratic Party (PSD), which was led by Ponta until July, when he resigned the leadership following allegations of corruption.

First, social media was considered to have been the strongest element in the presidential campaign run by Iohannis, with many observers considering it to be one of the key factors facilitating his success. However, despite this perception the official Facebook page dedicated to Iohannis was only created around five months prior to the election and had very little early impact in comparison to Ponta’s use of social media, which can be traced as far back as 2010. The latter’s professional posts may have nevertheless put off some internet users who would have appreciated a more personal style, in line with the expectations of the medium. The key benefits for Iohannis therefore derived not so much from how often social media was used, but rather how it was used to generate emotion.

Second, the use of sensitive issues in campaigning, such as attacking a candidate’s nationality, ethnicity, religion and family, was shown to be fraught with danger during the presidential election. Iohannis was accused of not being fit for the presidential position on the basis that he was not ‘purely’ Romanian, given his membership of Romania’s ethnic German minority. Religion was also cited, with Iohannis more or less directly accused of being unrepresentative on the basis that he does not follow the Eastern Orthodox Church, like the majority of Romanian citizens. Even his lack of children became fuel for his opponents.

However this line of campaigning merely served to highlight his distinctiveness in relation to Ponta – who, despite his young age for a top political position, came to be viewed as representative of the old political generation, with links to well-known post-communist politicians. As such, Iohannis was pushed into the position of an outsider, representing minorities in general, and standing for those located outside of the political mainstream.

Finally, the common strategy of portraying Romanian political leaders as ‘heroes’ has also been undermined. While Ponta sought to forge alliances to enhance his image of political strength, Iohannis declared that he would refrain from seeking the support of any politician or party during the second round of the election. The ideological differences between Ponta’s social democrats and some of the parties he had chosen to align with created the image of an overly centralised power.

The refusal of Iohannis to openly negotiate with other political actors was appreciated by those members of the electorate who felt uneasy with Ponta’s strategy. His much cited statement that he would ‘rather lose than become vulgar’ underlined his status as an outsider. This has differentiated him from anti-system politicians, who would be willing to play all of their cards simply to display opposition to the establishment.

The new political realities forged in the election have taken aback politicians from all parties in the eight months since. After testing to breaking point their capacity for adopting conservative stances, the social democrats initially appeared to have understood that it was time to accommodate the fundamental values of the progressive left in their platform. However, with Ponta’s resignation as leader, the party is now struggling with internal divisions. Meanwhile the PNL, built on an alliance between two former parties, the national liberals and democratic liberals (PDL), is also attempting to maintain unity while reorganising its regional structure.

With Romania heading toward a party system characterised by two dominant parties in the shape of the PDL and the PSD, logistical issues appear to have taken precedence over ideology, leaving several unanswered questions concerning the positioning of each party. A recent debate over a new ‘fiscal code’ is indicative of this state of affairs. While the social democrats propose lowering VAT, the PNL, who are in theory on the right of the political system economically, have advocated maintaining it at the same high rate it took on during the financial crisis – or, at worst, reducing it gradually. Such counter-intuitive stances and a lack of debate over cultural issues have added to Romania’s confusing ideological landscape.

For the two major parties, communicating with the electorate appears to be a low priority in the present set of circumstances. Similarly, they have both shown a reluctance to tackle issues head on and thereby clarify which part of the electorate and which style of leadership they should be promoting ahead of the upcoming elections. How the remainder of the country’s troubled summer plays out could serve as a good indicator for Romanian politicians, who can now no longer take anything for granted.

Mihnea Stoica – Babes-Bolyai University
Mihnea Stoica is a PhD candidate at the Babes-Bolyai University in Cluj-Napoca, Romania. He holds an MSc in Comparative European Politics from Vrije Universiteit Amsterdam and has worked as an MEP adviser at the European Parliament. His main interests are comparative politics, political behaviour, and political theory. His doctoral research focuses on populism, Euroscepticism and the far-right. 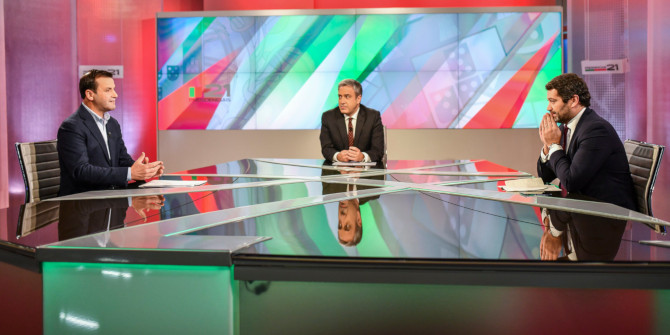