Leading thinkers across the worlds of science, public service and academia have launched a new global programme to combat climate change. Richard Layard outlines their proposal for big public investment in research that will dramatically reduce the costs of clean energy.

In the past, governments faced with existential threats to their country have called on their scientists and engineers to provide solutions. The same should be happening now with climate change. But incredibly, only 2% of the world’s budget for public research and development (R&D) goes on such efforts. Instead, we need a hugely expanded and internationally coordinated R&D effort – a Global Apollo Programme.

The objective is simple and its economic logic blindingly obvious. If clean energy can be made less costly to produce than energy from fossil fuel, then fossil fuel will simply stay in the ground. And the need is urgent. On present policies, the world’s temperature will reach 2˚C above the pre-industrial level soon after 2035 and stay above that level for a few centuries. Eventually the whole Greenland ice cap will have melted, and the sea level will have risen by six metres.

Fortunately, governments around the world are beginning to realise the case for publicly funded research to stop this happening. After the recent G7 meeting in Bavaria, the leaders declared:

“We will work together and with other interested countries to raise the overall coordination and transparency of clean energy research, development and demonstration, highlighting the importance of renewable energy and other low-carbon technologies. We ask our Energy Ministers to take forward this initiative and report back to us in 2016.”

The Global Apollo Programme proposed by seven authors including myself is the obvious way to proceed. Like the Apollo moonshot programme, it is a 10-year programme with one clear goal.

The target for the Programme is to reduce the costs of clean energy and to do so fast. Within 10 years, baseload electricity from wind or sun has to become less costly than electricity from coal throughout the world.

Is it feasible to achieve such a quick reduction in costs? There is an almost exact precedent in the history of semi-conductors, the price of which has fallen steadily for 40 years. This is called Moore’s Law, but it did not happen by magic. It happened largely through a major pre-competitive programme of R&D, financed chiefly by governments. The whole effort has been coordinated by an International Technology Roadmap Committee consisting of the world’s leading countries and companies. Year by year, this committee has identified the bottlenecks to further price reduction, and commissioned research to unblock those obstacles.

Leading scientists including Martin Rees and business people including John Browne believe that the same could be done with energy from sun and wind. The price of silicon photovoltaic solar modules (which are semi-conductors of a kind) is already falling rapidly (see Figure 1). But it needs to fall even further and faster, as do the costs of the remaining ‘balance of systems’.

Figure 1: How the price of silicon photovoltaic solar modules has fallen as installed capacity has risen 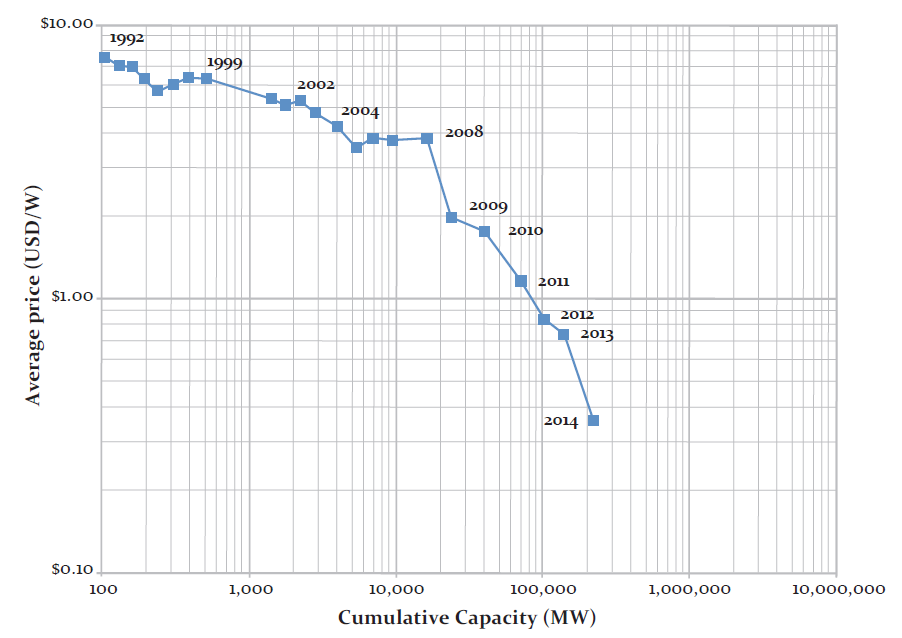 Although solar power in many sunny areas and wind power in many windy areas are now competitive when they are in use, these energy sources are intermittent. They cannot currently provide a baseload 24-hour service. For sun and wind to be able to provide baseload 24-hour electricity, we need cheap methods of storing electricity and better ways of feeding intermittent electricity into the grid (using smart grids and better interconnectors). And to cut carbon emissions further, we need to be able to electrify all land transport, which means cheaper mobile storage of electricity.

These are scientific challenges. They will not be solved by doing more of the same. But they are problems – just like putting a man on the moon – that can be cracked if the effort is properly organised and financed. Hence the proposal for a 10-year Global Apollo Programme involving as many countries as possible.

At current prices, the Apollo moonshot cost $15 billion a year for 10 years. That amounts to 0.02% of today’s world GDP and provides an appropriate minimum scale for the Global Apollo Programme. It requires a more than doubling of the present level of effort.

So any government joining the consortium will pledge to spend an annual average of 0.02% of GDP as public expenditure on the Programme from 2016 to 2025. The money will be spent according to the country’s own discretion. The Programme has been discussed with governments worldwide over the past years and many of the world’s leading countries have expressed interest.

Year by year, the Programme will produce a clear roadmap of the scientific breakthroughs required at each stage to maintain the pace of cost reduction. There will be a Commission consisting of one representative of each member country and a Roadmap Committee of around 20 senior technologists and business leaders who will construct and revise the roadmap year by year.

From that will emerge a set of coordinated plans to tackle the roadblocks. The programme will be co-located with the International Energy Agency (IEA) in Paris, but it will of course include many countries that do not belong to the IEA. All results discovered through the Programme will be made publicly available (though patentable intellectual property will be protected and will remain with those who made the discoveries).

This Programme is not the only thing that is needed: we need more energy efficiency, more nuclear power and taxes on carbon until fossil fuels finally disappear from use. But in terms of value for money, a Global Apollo Programme is an essential component of any serious attempt to manage the risks of climate change. Without it, targets of emissions reduction will be extremely difficult to deliver.

The Global Apollo Programme will contribute powerfully to a safer and better world at relatively low cost. It will reduce global warming, add to energy security and reduce the polluting effects of fossil fuels, which now kill millions of people. It may even generate sufficient savings in energy costs to cover its own costs completely. We hope that by the end of this year, all major countries will have decided to join.

This article was published in the latest issue of Centrepiece, the magazine of the LSE’s Centre for Economic Performance (CEP). It summarises ‘A Global Apollo Programme to tackle climate change‘ by David King, John Browne, Richard Layard, Gus O’Donnell, Martin Rees, Nicholas Stern and Adair Turner.

Five minutes with Richard Layard: “Mental illness is the biggest single cause of misery in our society”

Our top five interviews of 2014