Turkey will hold elections on 1 November, with the campaign being marred by a bomb attack during a political rally in Ankara on 10 October which killed almost 100 people. Sezin Öney writes that the election, which follows an earlier election in June that failed to produce a majority for any one party, is unlikely to ease growing political tensions in the country. She argues that Turkish society is now increasingly polarised over the influence of Turkey’s President, Recep Tayyip Erdoğan, as well as the issue of the country’s Kurdish population, following a resumption of hostilities between Turkey’s security forces and the Kurdish PKK group since July.

Turkey has just witnessed the deadliest terror attack in its history; suicide bombers striking a peace rally in Ankara, killing almost 100 people and injuring hundreds. Under normal circumstances, such a brutal assault in the country’s capital would have united society and politics in solidarity, but in Turkey’s case, even further tension was provoked. The rally was attended by leftist parties, trade unions, civil society organisations, and religious minority Alevites’ and Kurdish activists; hence the bombing (once again) hit upon Turkey’s left-right, Sunni-Alevi and Kurdish-Turkish socio-political cleavages, that were already highly charged.

Turkey has always been politically polarised going back to 1960, when the first military intervention took place under the pretext of settling political tensions. The 2007 Memorandum is the last time the Armed Forces intervened in politics; as this Memorandum generated negative public reactions, it is considered that from then on civilians have been in full control.

Turkey’s fragile electoral democracy is now facing an unprecedented test: the civilians are at the helm and they have to prevent further chaos – as well as averting the possibility of any ‘iron hand’ hijacking of the state. Their tasks ahead are gargantuan; to establish a system of checks and balances to ensure political accountability, curb authoritarian executive tendencies, and reduce ever escalating political polarisation. This is the context within which new elections will be held on 1 November – a repeat of elections that took place on 7 June.

Turkey’s ‘repeat elections’ and the polarisation of Turkish society

Opinion polls suggest that not only the actual voting itself, but also the results of the June elections are likely to be repeated. In the June elections, the ruling Justice and Development Party (AKP) received 40.9 per cent of the votes, with the main opposition, centre-left Republican People’s Party (CHP) receiving just under 25 per cent, the nationalist Nationalist Movement Party (MHP) 16.3 per cent, and the left-wing pro-Kurdish Peoples’ Democratic Party (HDP) just over 13.1 per cent. Following the election, the formation of a single party government was not possible according to the new composition of the Grand National Assembly (TBMM). In total, the TBMM has 550 seats and a majority of 276 parliamentarians are required for a party to form a government alone, with the AKP garnering only 258 MPs.

President Recep Tayyip Erdoğan raised the idea of holding new elections barely one week after the June elections took place, calling for repeat elections if the parties in parliament were unable to form a coalition. The AKP came to power in 2002 barely a few months after it was officially founded, hence neither Erdoğan nor his ‘former’ party (given he gave up leadership of the AKP on becoming President) have had the experience of being out of power since then.

In terms of the results of the upcoming election, the figure below shows a calculation based on public opinion forecasts from September by the quantitative data analysis site Radar Politika. The current forecasts indicate that the AKP’s current vote share lies somewhere between 38 and 44 per cent. However while the AKP is clearly set to become the largest party again, the Turkish electoral system makes it impossible for a party to form a single party government if more than three parties cross the 10 per cent threshold required to enter parliament, unless the first party has a vote share above 43 per cent. As such the AKP’s chances of winning a majority are very much in the balance. 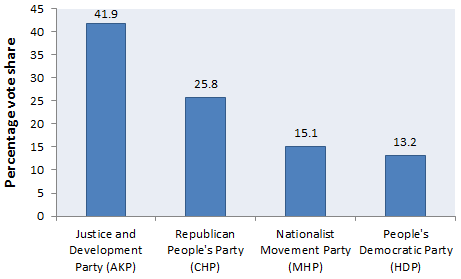 If the repeat elections will most likely produce repeat results, why is Turkey heading to the polls once more? This will be the fourth election in less than two years, with local elections being held in March 2014, Presidential elections in August 2014 (the first in Turkey’s history), followed by the two general elections in 2015. Ultimately the real reason Turkey is heading to the ballot box again is because it is in the interests of Erdoğan and the AKP’s leading names, including Prime Minister Ahmet Davutoğlu, who are staunchly loyal to him.

First of all, power within the AKP is increasingly concentrated in President Erdoğan’s hands – despite the fact that the Head of the Republic has to be “politically neutral and unaffiliated” according to Article 101 of Turkey’s Constitution. Those opposing Erdoğan in the AKP have been cast adrift over recent years. Currently, politicians holding the party’s top jobs and candidates standing for parliament all fulfil the ‘Erdoğan loyalty criteria’. The marginalisation of those at odds with the President are so clear that the former President and AKP founder Abdullah Gül was not even invited to the last party Congress in September.

There have been allegations throughout the summer that Erdoğan and Davutoğlu have conflicting political targets; it was rumoured that the former opted for repeat elections and the latter a grand coalition of the two main right and left parties, the AKP and CHP. But this line of argument has largely stemmed from politicians and political commentators who are supportive of the grand coalition idea. So far, there has neither been any concrete evidence, such as a public declaration, nor any tangible act on behalf of Davutoğlu that would signify he is seceding from Erdoğan’s sphere of influence. On the contrary, Davutoğlu always emphasises that Erdoğan is much prized by the AKP and that “the President’s legitimacy cannot be questioned”.

There is also the question of whether the AKP’s circles are sticking with Erdoğan because they fear him, or whether Erdoğan and the AKP are simply inseparable. This is something of a chicken and egg question, but one thing is for certain: both Erdoğan and the AKP consider political hegemony as their natural right. This line of thought has been summarised perfectly by one of the public intellectuals closely affiliated with the AKP (who was also the ‘senior advisor’ of Davutoğlu), Etyen Mahçupyan, who states: “There remains no possibility for the opposition to do politics and politics is experienced only between the AK Party and society”.

Lastly, it should be remembered that the AKP was only short of 18 parliamentarians after the June elections; thus, what the AKP is after is what I would term ‘surgical interventions’ in certain localities. This time what might determine the outcome may not be the overall votes the AKP receives (unless they experience a serious drop in votes, bringing them below 40 per cent), but the ‘extra parliamentarians’ they could win in highly contested constituencies.

Erdoğan commands Turkey’s political psyche, with his influence even extending as far as the public vocabulary. When faced with investigations in December 2013 in what was arguably the biggest corruption and bribery scandal ever experienced in the country, allegedly involving members of the AKP government and his family members, President Erdoğan argued that a “parallel structure” had plotted a coup to topple him through these investigations. He contended that the religious sect of the Muslim cleric Fethullah Gülen conspired to establish a “shadow state”, embedding followers in the judiciary and the security forces in collaboration with “foreign powers”. Erdoğan stated that: “I want my dear nation to know that we are not just faced with a simple network, but one which is a pawn of national and international evil forces”.

While Erdoğan provided this idea through his speeches; his supporters in government-affiliated media filled in the blanks, popularising the “parallel state” argument. The Gezi Protests of 2013 were similarly framed as a coup plot by Erdoğan and his supporters: local and international powers were teaming up to oust Erdoğan. Alongside the concept of the “parallel state”, Erdoğan also popularised the word “Çapulcu” (looter), portraying the protesters as mere looters in the process of vandalising public and private property.

Although social tensions have mounted since the Gezi Protests, the most serious socio-political challenge Turkey faces is the eruption of the Kurdish Question. Since July 2015, clashes have resumed between Turkey’s security forces and the Kurdish armed insurgent PKK group and its affiliates, claiming multiple civilian lives, including several children. The conflict has a history going back almost 30 years, but the new clashes have also taken place in urban centres in Kurdish dominated regions, resulting in an unprecedented escalation in civilian causalities and victims.

Nevertheless, the ‘armed’ casualties are also mounting in number; since July, around 150 Turkish security forces and – though reliable numbers are lacking – hundreds of armed PKK members have lost their lives. Any short term exit from the cycle of violence seems quite improbable with increasing political polarisation and nationalism of varying forms coming to the fore. Moreover, Erdoğan has interpreted the increasing tensions over the Kurdish Question as an attempt to sabotage his success. He identifies the ‘parallel structure’, the PKK, and Selahattin Demirtaş, the co-leader of the HDP, as the orchestrators of the unrest.

But, ‘explanation through conspiracies’ is not just Erdoğan’s method; it is also an increasingly common strategy among pro-government circles. Just as a recent example, International Relations Professor Beril Dedeoğlu from Galatasaray University, serving as Turkey’s European Union Minister and as a technocrat in the current electoral government, alleged that the bombing in Ankara was a collaborative plot by ISIS and the PKK to engineer internal strife in Turkey.

As a skilful orator, Erdoğan is a master of populist rhetoric, depicting sharp ‘us’ and ‘them’ demarcations between his supporters and opponents. The end result is an intensely polarised society with clear political fault lines; some loving Erdoğan, and others hating him. Turkey’s politics are now firmly in uncharted waters and regardless of the result of the upcoming election, the political tensions surrounding Erdoğan are unlikely to disappear.

Erdoğan’s term as President ends in 2019. All evidence suggests that Erdoğan will cling to power by all means possible and will not give up his assertive political style. And it is likely that he will be fanning the flames of love and hate surrounding him, dividing Turkish society even further. It is now likely that Turkey will sink into misery, facing political, economic and social instability, and muddling through continuous, managed chaos, unless political polarisation subsides through a pervasive wave of solidarity capable of bringing together loosely diverse segments of society that remain supportive of democracy.

Note: This article gives the views of the author, and not the position of EUROPP – European Politics and Policy, nor of the London School of Economics. Featured image credit: AK Rockefeller / Flickr (CC BY 2.0)

Sezin Öney – Bilkent University
Sezin Öney is based in the Political Science Department of Bilkent University in Ankara, and columnist for Taraf daily, Turkey. Her research interests include, populism and national studies, comparative politics, linguistic rights and discourse analysis.