In recent decades, the right of Italy’s party system has been dominated by Silvio Berlusconi, who currently heads a revived version of his Forza Italia party. As Daniele Albertazzi writes, however, Forza Italia has been pushed into fourth place in several opinion polls in 2015 by the growth of the Northern League (Lega Nord), which has traditionally advocated a political platform focused on the interests of regions in northern Italy. He notes that the party’s rise in popularity, which has been coupled with a strategy to win support in central and southern Italy, could indicate the start of an important shift in the Italian right.

On 8 November, the Lega Nord held a much-anticipated rally in the city of Bologna. The leader of Forza Italia, Silvio Berlusconi, who has been Prime Minister four times with backing from the Lega, also attended the event. The two were joined by a third politician, Giorgia Meloni, who leads ‘Fratelli d’Italia’ (Brothers of Italy), a small party which has inherited representatives (and votes) from the now defunct, ‘post-fascist’, Alleanza Nazionale (National Alliance).

As passers-by were treated to the sight of roman salutes being exchanged in Bologna’s major piazza, the Lega Nord’s leader Matteo Salvini boasted on social media that as many as 100,000 people had converged on the city that day – although more credible estimates have lowered that figure to about 10,000, given the size of Bologna’s central square.

What really matters, of course, is the coverage Salvini’s views on immigration, Islamic fundamentalism, and the EU received in the media (and on social media), but also the mere fact that such a rally had actually taken place without major incidents. It is precisely in former Communist strongholds such as Bologna and other cities of the Emilia-Romagna region, at one time no-go areas for radical right activists, that a radicalised Lega Nord has recently enjoyed a revival. Although the party had put in a weak performance in the national election of 2013 – its vote share being halved since the previous general election – it quickly recovered, performing exceptionally well at the regional elections held in Emilia-Romagna in November 2014.

Here Salvini’s party gained a staggering 19.4 per cent of the vote (up from 3.3 per cent in the previous regional elections), setting the stage for further positive performances in other regional elections that followed the year after. By relentlessly focusing on immigration and Islam, as well as the euro and the EU, Salvini has managed to reach out to a variety of radical right parties and organisations in Italy, without shunning collaboration even with the most extreme among them.

He has also taken the risky (but, so far, electorally rewarding) decision to temporarily abandon an objective which had very much defined the Lega Nord throughout its history, before the party’s founder Umberto Bossi was forced to step down as leader due to a damaging scandal in April 2012. As he became leader, Salvini set aside the Lega Nord’s long standing claim that northern Italian regions should enjoy more autonomy, and now argues that Italy will either save itself as a nation, or it will fail.

Under the banner ‘Noi con Salvini’ (Us with Salvini), which is more marketable in the south than the Lega Nord’s brand, the party has taken part in the most recent regional elections by fielding candidates across the whole country. Although, so far, southern voters have not responded positively to these advances – Us with Salvini scored just over two per cent in the Apulia region in 2014 – the strategy appears to be working in central Italy, where the Lega Nord’s past fixation with Italy’s ‘deep north’ had never gone down well with the electorate.

Recent polls have shown the party neck and neck with Berlusconi’s Forza Italia, and even overtaking it. To put this in perspective, one needs to keep in mind that in the elections held between 1994 (when Berlusconi ‘entered the pitch of politics’ for the first time, as he famously said) and 2013, Berlusconi’s party has been able to attract between two and eight times as many votes as the Lega Nord. 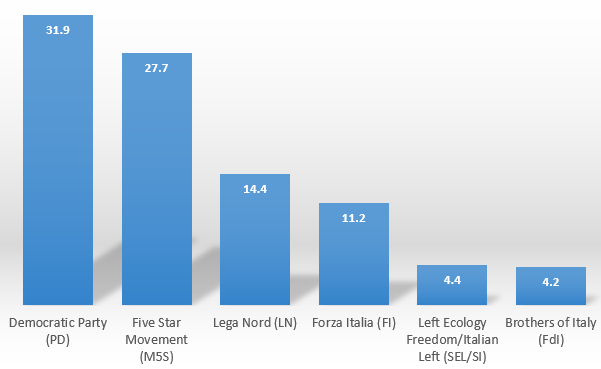 Note: Chart is provided for illustrative purposes and uses equal weighting from seven polls conducted between 11-20 November 2015. The figures for the Lega Nord include those for Us with Salvini. For more information on the other parties see: Democratic Party (PD); Five Star Movement (M5S); Forza Italia (FI); Left Ecology Freedom (SEL); Brothers of Italy (FdI).

Obviously, one should not read too much into surveys of voting intentions taken at this stage in the electoral cycle, as we do not even know when the next Italian general election will be held. However, read in conjunction with data on the most recent regional elections, and given that Forza Italia has now been shrinking for some time, the polls suggest that we may be witnessing an important shift in Italian politics.

The main conundrum is what role the Lega Nord will play in a future right wing electoral alliance (and, eventually, a governing coalition). In a recent book, Populists in Power, my co-author Duncan McDonnell and I have shown that, under its previous leader, the Lega Nord had been able to preserve its outsider identity and achieve some success in government, despite being the junior partner in successive centre-right coalitions dominated by Berlusconi.

But as things stand at the moment, there is no reason why the party should continue to accept such a role. Due to a new electoral law applying to general elections that was passed by the current governing majority, parties will need to form alliances and create unitary electoral lists if they want to have any chance of forming the next government (the law assigns bonus seats to the electoral list gaining a relative majority of at least 40 per cent of the vote in a general election). Granted, Salvini running for Prime Minister may not be a good choice for the right, given how radical and divisive his rhetoric has always been. Having to compete with the current Prime Minister, Matteo Renzi (an expert at occupying the centre ground, often against the wishes of many in his own party), Salvini’s appeal to moderate voters would probably be found wanting.

However, at present a relative majority of those who identify with the centre-right would choose Salvini as their prime ministerial candidate, mainly because of the lack of credible alternatives; but even if he does not manage to run for the top job, the Lega’s leader now has the strength to place his party’s key words and policies at the heart of a future right wing programme of government, thus tilting what was a centre-right coalition further to the right.

Indeed, those who gathered in Bologna on 8 November may have received a taste of things to come: despite giving a speech that could have been written by Salvini himself (especially the parts on law and order and immigration), Silvio Berlusconi was unceremoniously invited to leave the stage by the Lega Nord’s leader – something that would have been unthinkable only a few years ago – as his address to the crowd had gone on for too long. Ultimately, while it is fair to say that the trajectory of the Italian right is still very much uncertain at present, Salvini’s party increasingly appears to have both the ambition and the means to affect its path.